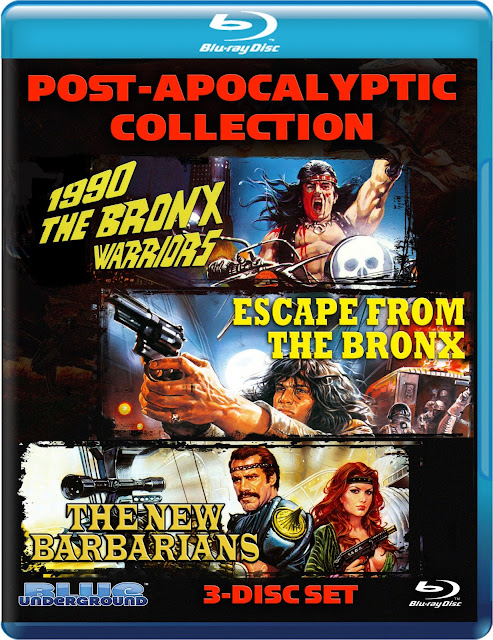 1990: THE BRONX WARRIORS:
It’s 1990 and the Bronx has officially been declared a “No Man’s Land.” The authorities have given up all attempts to restore law and order. When a beautiful young woman runs away from Manhattan into this wasteland of motorcycle gangs and marauding warriors, her corrupt father sends a ruthless mercenary to bring her back at all costs. But gang leader Trash has other plans, uniting the rival outlaws to wage an all-out guerilla war against their corporate oppressors.

ESCAPE FROM THE BRONX (1982)
The year is 2000 and the Bronx has been reduced to a decaying, desolate wasteland infested with swarms of vicious street gangs and outcast scavengers. When an imperialistic mega-corporation plans to rebuild the doomed “No Man’s Land” into a perfect metropolis, they unleash their secret army of sadistic death squads to wipe out the few remaining inhabitants. But beneath the twisted rubble, fierce legions of resistance fighters arm themselves for the final onslaught – ready to die for their homeland. And ready to kill for it.

THE NEW BARBARIANS (1983)
It’s the year 2019 and the world has been devastated by nuclear war. The few survivors try desperately to reach a distant land, only to be thwarted by brutal attacks from the fierce Templars and their leader One. When solitary warrior Scorpion rescues the beautiful Alma from the clutches of the Templars, they join Nadir and a ragtag group of survivors in a furious fight to the finish against the ruthless exterminators.

ESCAPE FROM THE BRONX: ©1983 Fulvia Film S.r.l. All Rights Reserved.