SYNOPSIS: Psychotic son of a murdering small town doctor escapes from a mental institution and returns to the town he blames for his father’s death to administer a healthy dose of revenge.


ANECDOTAL: This was my first viewing of DR. GIGGLES as I missed its 1992 theatrical run. Having been exposed to a  lot of 70’s/80’s horror (I’m a child of the VHS era after all) I found most 90’s horror to be lacking certain visceral elements. For me, the early 90’s were a time of discovering indie films like Soderbergh’s KAFKA, and foreign films such as DELICATEESSAN, LIKE WATER FOR CHOCOLATE, TOTO LE HEROS, and MEDITERRANEO at Cinemapolis and Fall Creek Pictures in nearby Ithaca, New York, two establishments that nurtured my late-teen yearning for cinematic fulfillment. During this exploration of arthouse/foreign cinema I missed out on the latter 2/3rds of 90’s horror.


DVD: DR. GIGGLES is part of Warner Home Video’s Twisted Terror Collection, which includes Wes Craven’s DEADLY FRIEND (1986), Ken Wiederhorn’s EYES OF A STRANGER (1981), Kevin Connor’s FROM BEYOND THE GRAVE (1973), Oliver Stone’s THE HAND (1981), and John Carpenter’s SOMEONE’S WATCHING ME (1978). The DVD is a bare bones edition (only a trailer is included), the transfer is 2.35:1 anamorphic widescreen and from a clean print. I recommend purchasing the entire Twisted Terror Collection, these aren’t classic titles, but they are all quite entertaining. I picked up the Twisted Terror titles individually at Big Lots for $3 each, so $18 for the complete set, definitely a deal. 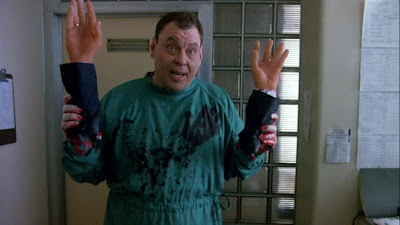 FILM: The maniacal title character, Dr. Giggles (Larry Drake), is introduced during the opening credits sequence as he performs a brutal open heart surgery within the psychiatric institution he’s confined to. Thereafter he escapes by car in a scene reminiscent of Michael Meyers escape in HALLOWEEN. It’s a fun, quick paced opening to the film, very engaging. Dr. Giggles (so nicknamed for his maniacal laughter and delusions of being a doctor) proceeds to his childhood home in the town of Moorehigh. There he sets about to exact revenge on the townsfolk whom 35 years earlier killed his murderous father, Dr. Rendell. It seems the good doctor went off the deep end following his wife’s death, gorily tearing the hearts from his patients in an attempt to revive his deceased wife. The Rendell House has obtained some notoriety over the years ala the Meyers House, it even has a nursery-like rhyme, similar to A NIGHTMARE ON ELM STREET that the townsfolk recite several time throughout the film. During his quest for revenge Dr. Giggles discovers that the young Jennifer Campbell (Holly Marie Combs) has a heart condition, he decides he must fulfill his fathers dreams of performing a heart transplant. Medical puns and clinical death ensue en mass as he dispatches the townsfolk one by one. The film is laced with delightfully terrible medical puns; “Take two and call me in the morning”, “Is there a doctor in the house?”, and “Laughter is the best medicine” - really awful, tongue-in-cheek stuff. It is a credit to actor Larry Drake that he pulls off these schlocky lines, as on their own they read like leftover Freddy Krueger one-liners. The cast of character is clichéd, but enjoyable, particularly the small town officer Hank Magruder (Richard Bradford). The FX are top notch, having been done by KNB FX Group, however, the film is light on gore. A lot of the deaths occur off screen or are implied, but there are a fewnotable gore scenes, one involving a young Dr. Giggles emerging from the body of his deceased mother, great stuff. It’s a bit uneven, but there are some creative deaths to be had. Body count: 17


VERDICT: DR. GIGGLES is an absurd and campy affair, the premise is not original, and at first glance it would appear a hokey and lame send-up of the slasher genre, and I guess it is. However, I came to it with low expectations and was pleased to discover what a fun watch it is, the film definitely rises above its novel elements. I consider DR. GIGGLES one of the better 90’s slashers. Great party film, grab a few beers, enjoy. *** (3 out of 5 stars)
Posted by Ken at 4:51 PM