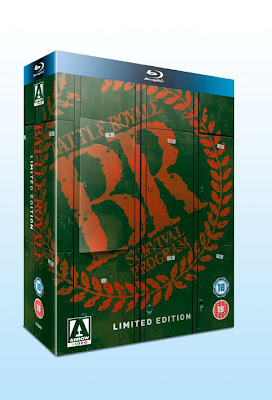 PLOT: In a world where teenagers have no respect and adults are losing control there can be only one solution: Battle Royale! Now, see what happens when you let a high school class loose on an island, arm them and then give them a simple choice... Kill your friends or have them kill you; with poison, cross-bows, machetes and dynamite. Takeshi Kitano is a teacher pushed to the edge by his unruly charges. Kidnapped and gassed, his class wake up with exploding metal rings around their necks. If they rebel, they could lose their heads. Now they have three days and only one is permitted to survive this grisly battle to the death. 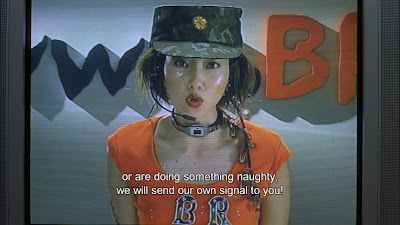 "At the dawn of the millennium, the nation collapsed. At fifteen percent unemployment, ten million were out of work. 800,000 students boycotted school. The adults lost confidence and, fearing the youth, eventually passed the Millennium Educational Reform Act, AKA the BR Act...." - Battle Royale Prologue
THE FILM: BATTLE ROYALE (2000) has a quite straight-forward and simple set-up. A particularly nasty LORD OF THE FLIES scenario plays out on a deserted island. In Japan society has gone to shit, the economy is fucked and kids are misbehaving themselves to a such a degree that the government passes the Millennium Educational Reform Act, AKA the Battle Royale Act. What could it be, stiffer punishment for juvenile offenses? Well sorta. How about a twisted lottery by which every year a class of Japanese student are selected at random and flown to an obscure island where they are pitted against each other in a three-day no-holds barred battle, and like Highlander there can only be one survivor. Sounds unfathomable doesn't it? Well, it certainly does to the 42 kids of Shiroiwa Junior High School’s Class B when they are selected to take part in the massacre. They thought they were going on a field trip, think again my naughty little friends. After being gassed and transported to the island they awaken to discover that their former 9th teacher Kitano, who had been stabbed in the ass at school a few years earlier, is overseeing the events with 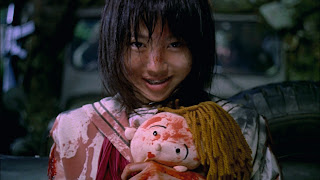 delight. He's assisted by the Japanese military. They've all been outfitted with explosive collars, if more than one person remains alive at the end of the three days all the collars will explode killing everyone. Talk about revenge. Kitano is reveling in it, and during his presentation he shoots a student in the head for whispering, yeah, pretty strict. He also detonates the collar of Nobu, who just happens to be the young man who stabbed him in the ass. They rules of Battle Royale are delivered by a super-cute woman calling herself Big Sister via a video screen, she speaks in a snappy, saccharine cadence that's just surreal given the fact that she's informing the 42  students (oops, 40 now) that all but one will violently die in the next 72 hours. Once they are told the rules of the game they are sent one by one onto the island each with a duffel bag containing a weapon, some useful some not so much. They range from bladed weapons, handguns, assault weapons, pot lids, binoculars and a GPS device. Many of the students team-up for protection, while others set out on their own. Forget about the clicks you once belonged to, the stakes are too high and friendship cannot be trusted. The films narrative focus seems is a young man named Nanahara Shuy, the late Nobu's best friend prior to his head exploding. He makes a pact to protect Nakagawa Noriko, whom Nobu had a crush on. The two eventually team-up with the mysterious Kawada, an "exchange" student who won an earlier round of the game and has returned to take revenge for the death of his girlfriend. One of the most vicious killers on the island is Kazuo Kiriyama, an exchange student like Kawada, who kills scores of players and seems to relish the thrill of the hunt beyond reason.Then there's the gorgeous femme fatale Mitsuko Suoma who uses her inherent sexuality and duplicity to take out her classmates one by one without remorse. Not everyone is so willing to take a life to save their own and several opt to end there own lives rather than participate in the barbaric contest, including two lovers who throw themselves from a seaside cliff. 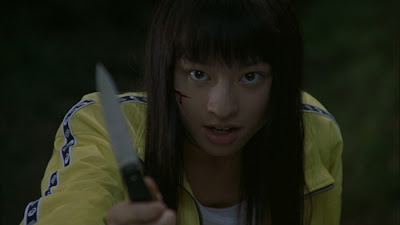 "So today's lesson is, you kill each other off till there's only one left. Nothing is against the rules" - Teacher Kitano
As the game plays out a death tally rises and is announced twice a day by Kitano via an island wide P.A. system, it's almost like a video game the way the stats are displayed on screen. The kills are fast and furious and bloody as hell and it could have easily fells pray to it's own blood lust but the film elevates itself with a true emotional center thanks to the focus on out two main characters. The film is peppered with poignant moments and a gorgeous score that keeps it character based. It's hard for me to find fault with this film. I don't have much in the way of criticism against this film, it's amazing. A few things I could mention are some dated effects and some might consider the ending a bit anti-climactic, I have no problem with it. 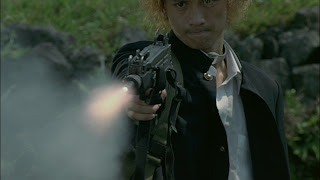 BLU-RAY/DVD: Long unavailable in a Region 1 format Arrow Video have released BATTLE ROYALE in a Region Free Blu-ray, that's right - playable worldwide. There's been speculation on why no Region 1 release has been made available ranging from Toei's licensing fee being ridiculous to the fact that after the Columbine tragedy here in the States no one wanted to touch such a volatile property. Whatever the reason this superb Japanese exploitation film is not only available, but available in a beautifully packaged Limited Edition run of 10,000 numbered copies. That said I'm reviewing a screener without the benefit of the extraneous packaging (sigh). The films looks very good in 16x9 enhanced 1.78:1 aspect ratio 1080p high definition. I would point out this is far from reference material and is not the sharpest or most detailed looking Blu-ray image I've seen but is more than likely vastly superior to previously available DVD editions of the film. The Japanese language 5.1 DTS-HD surround sound is wonderfully robust and dynamic. The score which includes Verdi's "Requiem" as well as selections from Schubert, Strauss and Bach plus original score my Masamichi Amano soars. There's new and improved English language subtitles. I didn't noticed a significant difference in the image and sound quality from Theatrical vs. Director's Cut. Now for the extras, whoah! Arrow Video have come through with an extravaganza of bonus content and if there's something I love it's a ridiculous amount of bonus content. 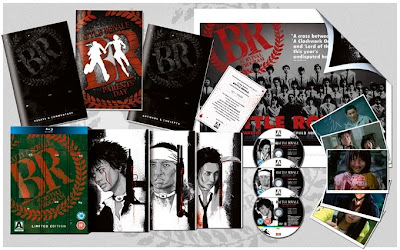 The Making of documentary (52:32) is quite lengthy and informative. A lot of behind-the-scenes stuff, you see Fukasaku directing the actors, it's interesting stuff with a few on-the-set interviews throughout. Both features are in HD in Japanese with English subtitles. .

The Director's Cut features an additional 6 minutes or so of film not seen in the Theatrical Cut. What's new? Additional flashback scenes, three epilogues, reaction shots and additional 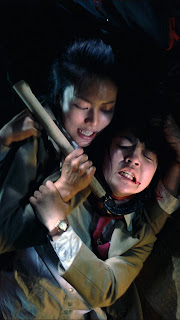 Disc 3 is a DVD and all features are presented in standard definition, not HD. The Premier Press Conference (12:01) features the writer of the Battle Royale novel Takami Koushun and director Fukasaka Kinji along with cast from the films discussing the film. The Slaughter of 42 High School Students (10:28) is an abbreviated version of the Making Of documentary on the 1st disc.  The Correct Way to Fight In Battle Royale (2:35) is a compilation of the instructional videos featured in the film without interruption. A Special Effects Comparison (4:17) showing us the creation of the special effects shots created for the 2001 Special Edition and my favorite feature (on disc 3 anyway) is the Trailer Gallery (23:09) and extensive collection of Kiniji films.
And sadly as mentioned before my review screener contained only the three discs and none of the following goodies ...sigh. What's missing? A commentary would have been nice.

VERDICT: BATTE ROYALE  (2000) is simply thrilling exploitation at it's peak of perfection. Young inexperienced teenagers pitted in mortal battle against each other on an obscure island. It's vicious stuff, it's human nature at it's worst and yet there's a real emotional center to the film. If you want biting social commentary it's here. If you want a gory exploitation it's that, too. What boggles my mind is that this is Fukasaku's 60th film and it's a vital piece of cinema, amazing stuff. This was my 1st viewing of the film and despite 10 years of hype it surpassed my expectations.  Battle Royale is a truly  phenomenal film and a definite purchase. And if you miss out on this limited Edition release don't fret. Arrow Video have done it again and 2011 looks to be a phenomenal year.
****1/2 (4.5 out of 5 stars) 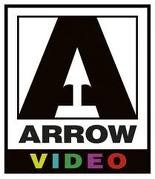