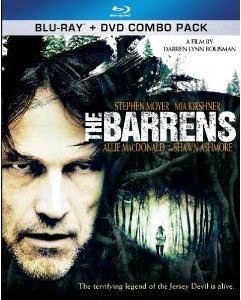 SYNOPSIS: It’s known as the Jersey Devil, the winged beast spawned 400 years ago by Satan himself. Some say this creature still inhabits the dense pine forests of southern New Jersey, where Richard Vineyard (Stephen Moyer, “True Blood”) takes his family for a rustic weekend camping trip. As the Vineyard family ventures further into the woods in search of the perfect campsite, Richard teeters on the edge of sanity. And it seems that the blood-crazed demon called The Jersey Devil may no longer be just a myth. Mia Kirshner (“The Vampire Diaries,” “The L Word”), Erik Knudsen (SAW II, SCREAM 4) and Allie MacDonald (HOUSE AT THE END OF THE STREET) co-star in this twisted chiller from writer/director Darren Lynn Bousman (SAW II-IV) about a new kind of horror that lives – and kills – in a place called THE BARRENS. 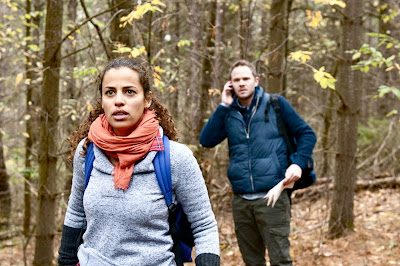 THE FILM: This tense chiller begins with an effective pre-credit sequence as a young couple walking in the Pine Barrens at the break of dawn find themselves a bit lost. The wooded area is alive with bird and animal noises echoing through the branches when suddenly it gets eerily quite and an odd shriek is heard. Already a bit spooked they get downright unnerved when they find a pile of animal guts on the forest floor, maggots and buzzing flies are having a feast. Suddenly they are then charged by a creature and they turn to flee in a panic, as you do when something that might want to eat you is in pursuit, and then WHAM! The young woman runs face first into a tree. It turns out not to be a viscous creature after all, but a wounded deer that drops dead, it's been clawed viciously and whatever it is that ripped it open is now upon the hikers....

Sometime later we meet the Vineyard family as they endeavor to the wilds of the Pine Barrens, New Jersey to spread the ashes of a loved one and for a weekend of camping fun, at least that's the plan. We have Richard (Bill Moyer, TRUE BLOOD), wife Cynthia (Mia Kirshner, THE BLACK DAHLIA), adolescent son Danny (Peter DaCunha) and rebellious teen daughter Sadie (Allie MacDonald). You can detect some underlying family issues are at play, they're a dysfunctional bunch but not dramatically so, they seem pretty normal. Danny's sad because the family dog "Oscar" has run-off and Sadie just does not wanna be there, a pretty typical teen.  Dad's a bit tired looking, he's got some stress and is really looking forward to the getaway, to return to the place he enjoyed with his father as a boy. En route they're a bit shaken when a wounded deer leaps in front of the SUV and drops dead, but none more so than Richard who nervously watches the edge of the woods along the road as if something dangerous lays in wait. 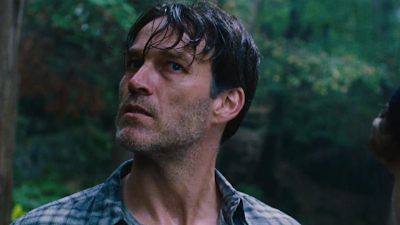 Arriving at the campsite they report the deer to the local ranger and settle in for the weekend. That night they gather around a communal campfire as a young man spins the tale of the local area legend - the Leeds Devil. The tale involves a woman named Mother Leeds who's burdened with twelve children and was said to commune with the Devil, in fact as legend tells it she bore a 13th child by Old Scratch himself and it was a hideous thing with cloven hooves, a horses head, a kangaroo's body and a serpents tail with leathery wings.  The monstrosity is said to stalk the nearby woods and in grand  campfire tradition the tale ends with a classic fright that sets the campers on edge, especially Richard who overreacts like a frightened schoolgirl.

It's right about here that we know for sure that something from Richard's past is stirring within him, something that's unspooling his mind. Through a series of flashbacks we piece together that when he was a child he witnesses something in the woods, something terrible which he believes was the Jersey Devil, and the thought fills him with dread, haunted by nightmares that have him sleepwalking through the forests at night.

Making matters worse Richard has a festering open wound on his upper arm which pains him, his behavior becomes more erratic and his temper flares. When some of the campers begin to disappear from the site under mysterious circumstances Richard decides to go deeper into the woods away from the others, it seems the deeper they go into the forest the deeper he sinks into madness.
The film benefits from some decent performances, particularly Moyer who keeps his native English accent intact which might surprise those who only know him as the Southern drawled Bill from HBO's TRUE BLOOD. It's his portrayal of a man's descent into madness that anchors the film and keeps you plugged in.

It's a great looking film shot on 35mm with wonderful cinematography, we get a lot of off-kilter angles giving the film an unease about it. Great saturated colors, the forests scenes look stunning, very well lit and crisp particularly the films final reel when they're drenched in atmospheric fog accentuated by a composer Bobby Johnson's haunting score.

The film does begin to drag a bit as the family argue about mundane things but the finale ratchets up the intensity and violence as Richard, suffering from dementia, fevered hallucinations and paranoia tries desperately to convince his family that the Jersey Devil exists and is a threat. It's not a perfect film, in fact after the first viewing I thought the ending was sorta a cheat, trying to be all things to everyone but with a repeat watch I was left with the opinion that this is a really decent pulse-pounder with some definite notes of THE SHINING as he loses his shit Jack Torrence style putting his son Danny in danger.

VERDICT: Darren Lynn Bousman's THE BARRENS (2012) is a tense, chilling psychological horror, this is a semi-original idea, can't recall too many Jersey Devil films. It's a real shame that this and Bousman's sleazy MOTHER'S DAY (2010) remake didn't get a wide theatrical release, this is fun stuff. If you enjoyed wooded horror, like THE SHRINE, there's a lot to love here, a recommend. 3.5 Outta 5