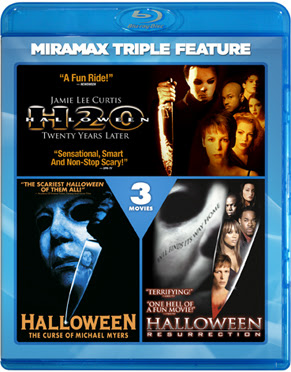 HALLOWEEN: H2O (1995)
Now the headmistress of a private school, Laurie Strode is still struggling with the horrifying, 20-year-old memories of the maniacal killer Michael Myers…when he suddenly reappears with a vengeance.

HALLOWEEN: THE CURSE OF MICHAEL MYERS (1998)
In a single horrifying night, Michael Myers' masked reign of terror changed Halloween forever. Now, six years after he was presumed dead in a fire, Myers has returned to kill again—and this time there's no escape. As the homicidal fury builds to a spine-tingling climax, the long-hidden secrets of the screen's most maniacal murderer are revealed…with shocking results.

HALLOWEEN: RESURRECTION (2002)
Reality programmers select a group of thrill-seeking teenagers to spend one night in the childhood home of serial killer Michael Myers. But the broadcast turns deadly when Michael himself decides to crash the party 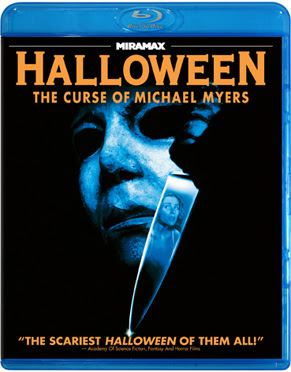 There are no special features presented which isn't surprising when you consider the Dimension DVD from years back offered none either. Two other versions of the film exist but have not been officially released, though they remain available through less than legal means. I do not understand why we haven't seen either come forth with a legitimate release, you cannot tell me there's no market for these films. Not an optional presentation but definitely a step-up from the Dimension DVD and at a budget price.

Verdict: HALLOWEEN: THE CURSE OF MICHAEL MYERS is an enjoyable entry in the series with some great atmosphere,  decent kills and an interesting if overwrought cult-curse element that, perhaps wisely, was never to be referenced again in the series. Then again, if you've seen the final two entries in the original run of films it may have been preferable. Definitely a film I will rewatch again and enjoy. It's not John Carpenter's HALLOWEEN (1978) but then again, what is?
(3.5 Outta 5) 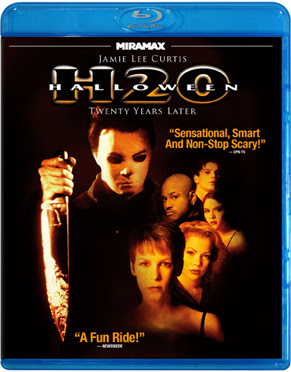 Blu-ray: Echo Bridge's Blu-ray of H20 presents the film in re-framed 16:9 widescreen (1.78:1) which is quite a departure from it's original "scope" (2.35:1) presentation. Honestly, Steve Miner and cinematographer Daryn Okada don't make great use of the scope aspect ratio here but I'm a stickler for presenting films in their original aspect ratio. Aside from the re-frame there's black crush, colors seems muted and the the 1080p boost in resolution only marginally improves fine detail and fine texture over the SD DVD. The 1080i transfer of THE CURSE OF MICHAEL MYERS is noticeably superior to what we have here.
The DTS-HA MA 2.0 Stereo audio is a downgrade from the previous Dimension Collector's Series DVD from a few years back that sported a not only a 16:9 (2.35:1) transfer and Dolby Digital 5.1 surround sound but subtitles and a small selection of extras, none of which we have here. While the DTS-HD MA 2.0 is adequate it is little else. Dialogue, effects and score come through clean and strong but it's not very dynamic and there's minimal use of the stereo directionals, it seemed very center heavy.
There's no special features, no subtitles, not even a trailer which I consider to be the bare essential, at least give us a trailer, c'mon now. The Dimension Collector's Series was pretty slim on features but at least offered an 18 minute featurette, a lame trivia game and a Creed music video. Actually, I'm kind of thankful that we don't get the Creed video but not porting over something from the DVD release is quite disappointing. The transfer being what it is (re-framed) and the audio not much better (DTS-HD Stereo) at least throw us a bone with some features.
Verdict:  As a continuation of the HALLOWEEN franchise I find H20 to be an utter and complete failure of a film. It has no personality, a complete lack of atmosphere and is definitely a product of the post-SCREAM 90's with an irritating script and a sterile, super-polished look about it. The kills are mostly lame, many of which happen just off screen and the jump scares are completely out of hand. I know this film has a devout following, which puzzles me,  but I can't recommend it as a first-time watch or even as an HD upgrade for fans when there are just so many better films worth your time and money, including HALLOWEEN 1-6. The 90's slasher resurgence is much maligned and not without reason, and H20 is prime example of why. (2 Outta 5)

I thought HALLOWEEN: H20 was the bottom of the barrel but HALLOWEEN producer Malek Akkad lifted up the barrel and scraped what was underneath top produce this last nail in the coffin of the franchise with the help of director Rick Rosenthall who also helmed HALLOWEEN 2 and what we get is just dreadful.

It's been three years since the events of H: H20 and Laurie Strode (Jamie Lee Curtis, TERROR TRAIN) has been sent to a psychiatric hospital following the events of the previous film after it is revealed that she offed the wrong guy last film - this was just a total revisionist cheat and complete bullshit. Anyway, she's considered a suicide risk and heavily medicated. On Halloween night Michael returns to slay his sister and succeeds after perusing Laurie to the rooftop where she has laid the shittiest of Rube Goldberg snare traps you could imagine, just laughable stuff, of course it's executed perfectly and even still she fucks it up and is stabbed in the back and falls to her death after uttering the remarkably awful phrase "I'll see you in Hell". While H20 started off with a great opener and then proceeded to fail this starts off awful and just gets worse.


Blu-ray: Echo Bridge's Blu-ray of HALLOWEEN: RESURRECTION presents the film in re-framed 16:9 widescreen (1.78:1) which is different from it's original "scope" (2.35:1) presentation (tsk tsk) but it is my understanding that Echo Bridge merely present what elements are given to them from Miramax and do not manipulate the audio-video themselves. Aside from the re-frame the colors are quite good, it's sharper than the Dimension DVD, blacks are decent but inconsistent and the the 1080p boost in resolution only marginally improves fine detail and fine texture over the DVD. The 5.1 DTS-HD Master Audio track is quite nice, effects and score come through just fine though I noticed dialogue was a bit weak at times, overpowered by the effects and score.
Like the previous two films on this Triple Feature Blu-ray there are no special features, no subtitles, not even a trailer. That said, if you purchase Echo Bridge's stand alone Blu-ray of HALLOWEEN: RESURRECTION it features most if not all of the bonus content from the Dimension DVD if you feel you need to own it.


Verdict:  The 90's slasher resurgence was ripe with flaccid post-SCREAM wannabees like HALLOWEEN: H20 but this is some next level  shitiness right here, just a wretched post-THE BLAIR WITCH fumble that not surprisingly put the nail in the coffin of the original HALLOWEEN franchise which was not resurrected again until Rob Zombie's HALLOWEEN (2007). (1.5 Outta 5)

Not a fan of two outta the three Halloween sequels presented here but I do love  that Echo Bridge Home Entertainment are offering these films as stand alone Blu-rays or in a budget minded double feature and triple feature sets. Correct aspect ratios, special features and 5.1 surround sound mixes on all three titles would have been appreciated and as such I find myself still hanging onto the previous DVD editions which is sorta sad.