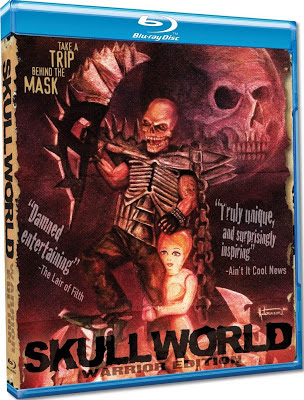 Over the course of a few years Canadian filmmaker Justin McConnell follows Toronto-based cardboard warrior Greg Sommer around documenting the man behind the Canadian chapter of Box Wars. Alongside a small group of dedicated cardboard warriors the craft GWAR-styled armor from cardboard and duct tape to compete in gladiator-esque battles against one another until just one victorious warrior is left standing. At these Box War events Greg dons a signature skull mask becoming his alter-ego, the mighty Skull Man! 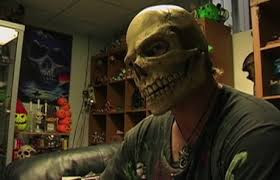 In his thirties Greg Sommer is a gravedigger at the local cemetery whom rents living space from his middle-aged parents and rocks large to the glorious sounds of Clutch while decked out in denim and a selection of sweet metal t-shirts, he surrounds himself with a band of warrior-nerd friends and is about the most positive thinker you could ever imagine, it's hard to not love this guy. It's an unconventional and odd lifestyle, some might consider it a bit loser-ish, but they'd be quite wrong. McConnell has assembled quite an entertaining and fist-pumping documentary with some in-your-face battle scene that made me wanna jump off the couch and craft a cardboard mace and a suit of armor to get in on the action. Sommer and his band of merry cardboard mace-makers look like their having so much fun, it's pretty infectious. 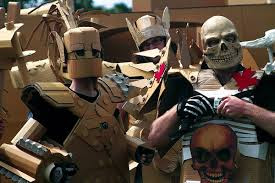 McConnell balances the cardboard gladiator fights with some revealing man-behind-the-skull footage exploring Greg Sommers when he's not in the character of Skull Man and he's absolutely a charismatic and fascinating guy. There's some great footage of a teen Greg filming a weird public access style cable variety show and a bizarre graduation speech which gives us a neat origin story for Sommer and Skull Man. McConnell also captures on film Greg's own spiritual quest with excursions into shamanism, spiritual mediums and the search for extraterrestrial life, he's a pretty deep guy underneath that metal-head exterior, Skull Man's got questions, just like the rest of us.

Turns out that Box Wars is a worldwide phenomena and there's a cool excursion to Melbourne Australia where he meets the Aussie chapter of the cardboard crew and enters into battle with as an honored guests, all this leads up to the possibility of a Skull Man Box Wars television program starring Skull Man, which I . 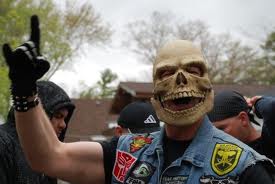 Sommer is such a positive dude but I found myself waiting for the switch to be flipped revealing some dark secret which would cast the dude in a negative light, turns out I'm just a cynical little bitch and this never happens - he's just a glorious dude who loves to rock large and wage cardboard war. Long Live Skull Man and the cardboard carnage!

Verdict: Skull World just pulls you right into it's nutty mayhem, it brought me back to re-enacting episodes of the He-Man TV show in my backyard in very much the same way with my friends as a kid, cardboard swords and all! Skull World is a fist-pumping, cardboard sword swinging good time, definitely a documentary with some cult classic potential and a heck of an entertaining watch. 3.5 Outta 5