WTF! Dutch people of the world, what was in the water of those famed canals in the 80's that lead to this? Hey, I'm not complaining, it's nutty as fuck and I sorta expected no less from the director of the Christmas crime-slasher Sint (Saint) from 2010 but even with that odd watermark in mind I wasn't expecting a scuba-diving slasher, no sirree. 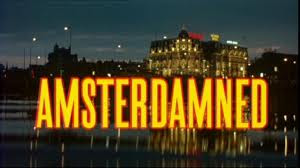 The film opens with a surprisingly effective POV shot of our scuba-slasher stalking the gorgeous nighttime canals of Amsterdam until he comes across prostitute who's already had a shitty night, but it's about to get even worse. The frog suited attacker leaps from the canal and plunges a divers knife into her flesh repeatedly before dragging her corpse back into the murky depth of the canal. The next day her mangled corpse is hung from a footbridge where it is struck by a passing tour boat. Her bloody corpse dragging along the entire length of it's windowed visage to the scream-filled horror of the boy scouts and nuns until it falls through the open-top roof, the whole set-up of the first kill and it's aftermath is a real showstopper, it gets it's hooks right into you! 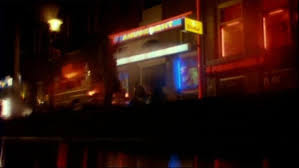 When more bodies emerge it's pretty obvious that there's a seial killer on the lose and detective Eric Visser (Huub Stapel) is brought in on the case and the film plays our more or less like an Italian style Giallo crime drama with some typical cat and mouse games between cop and killer with some stylish kills and a surprising amount of action including a fantastically over-the-top hi-speed boat chase through the canals and sometimes on the surface streets, it really puts to shame the boat chase in The World is Not Enough (1999).

Detective Visser has a young daughter named Anneke and the film needed more of her, or at least some exploration of her character. At one point she aims a gun at her father while he's bathing in the tub, and then.... nothing, no follow-up! WTF! The film definitely has a weird sense of humor, aside from the odd gun-incident Anneke answers the phone only to tell her dad's boss that he's in the bathroom, probably masturbating! There's also a strange pursuit of a youthful offender that ends in a bakery with the perpetrator face down in a cake, eating frosting with a fun exchange between the baker and cop, I really like director Dick Maas's strange sense of humor here.

The kills are pretty great, we get stabbings, decapitations and even a suicide by harpoon, there's no shortage of creative grue! The killer in a decked-out in a black wet suit and it comes across fantastically, like an aquatic version of My Bloody Valentine (1981) with the heavy breathing and flippers, a very cool killer indeed and quite unique. The best kill scene for me was a young women on an inflatable raft that brought to mind Friday the 13th: The Final Chapter (1984) and the infamous trampoline scene from Eli Roth's Thanksgiving (2007), great stuff. 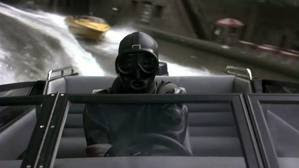 On the downside there are some long stretches of film that put the sleepy boredom right into me but just as I feared I might be overcome by the sandman we get another great kills or some god awful 80's fashion or a quirky 80's synth music cue that brought me back from the edge of boredom, it's not a perfect film but it's  an odd 80's Dutch slasher with Giallo-esque tendencies that's certainly entertaining, loaded with action and with a decent body count and a very peculiar sense of humor.

DVD: There's currently no Region 1 North American edition of this nutty Dutch slasher but Shameless Screen Entertainment have come to the rescue presenting Amsterdamned (1988) uncut and in it's original aspect ratio (1.85:1) on Region 2 DVD. It's an attractive shot film and it looks great on DVD, not the most crisp or sharp image you will ever see but colors are vibrant and overall we get a nice video presentation  .

Audio options include choice of original Dolby Digital 2.0 Dutch or a dubbed English track with optional English subtitles. This edition is not exactly waterlogged with extra features but we do get a nifty behind-the-scenes making of documentary, English an Dutch language trailers, a reversible sleeve of artwork and the standard Shameless Screen Entertainment trailer reel. Would have loved to hear director Dick Maas offer up a commentary just to see what his thought process was during this film, where the idea of a scuba-slasher came from, directors like this need to be dissected and explored for further study, not really, but a commentary would have been appreciated for this nutty Dutch film.

Verdict: I can think of precious few late-80's slashers that can outmatch this imaginative and nutty Dutch entry, it's a definite recommend and I give it creativity points on the concept and execution alone, just when you think you've seen it all Dick Maas and the Dutch are there to prove you wrong. 3.5 Outta 5