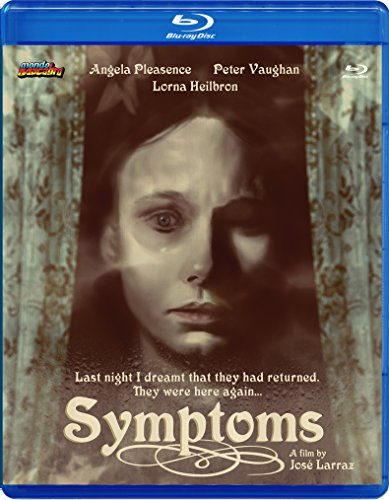 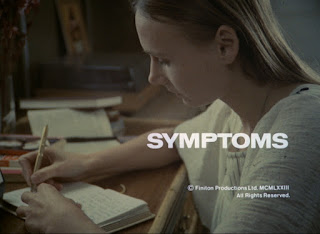 Symptoms (1974) is a quietly intense movie centered around a young woman named Helen, played by Angela Pleasance, the daughter of Donald Pleasance, who is most remembered as Dr. Loomis from the Halloween franchise. Angela herself featured in a few horror movies herself, including the anthology From Beyond the Grave and the surreal child-horror movie The Godsend, which not too long ago received a Blu-ray release from Scream Factory. Here she plays an awkward woman who lives alone in a secluded countryside mansion in a nicely wooded area with a nearby lake. The location makes for a gorgeous scene with the sun filtering down through canopy of leaves, but the idyllic scenario is betrayed by the young woman's frail mental state which threatens to doom her and those around her. 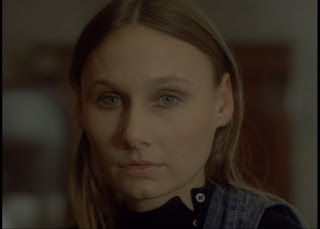 Helen has just returned after travelling abroad and brought with a new friend, a short-coiffed woman named Anne (Lorna Heilbron) with whom Helen seems to be somewhat obsessed with, there's some one-way sexual tension happening here. It becomes clear to Anne that Helen is not quite right in her own mind, and despite some oddball happening chooses to stay around awhile and help her friend cope with whatever is troubling her. Adding some weirdness to the story are images of corpses floating in the nearby lake and a menacing handyman named Brady (Vaughan) who is antagonistic towards the rapidly unravelling Helen, making veiled statement to both her and Anne regarding another visitor to the country mansion who disappeared, a mysterious woman named Cora (Marie-Paule Mailleux) with whom Helen was also obsessed with, a woman who is glimpsed from time to time, seemingly haunting the troubled young woman. 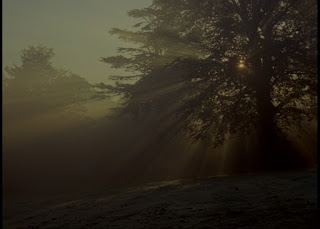 Without spoiling too very much this is a movie about a woman in a fragile state of mind, who may or may not be experiencing some form of haunting, and I like that I was never quite sure what was going on, which could be upsetting to some, so be forewarned about that. The movie unfolded in a wonderful 70s slow burn sort of way, punctuated by some small but powerful moments of violence and surreal camerawork with some creepy old dark house atmosphere. I loved the natural woodland setting, the natural sounds that comprise the soundtrack, and the way the quiet menace of the situation slowly unfold until a right and proper winner of an ending as madness completely washes over out troubled protagonist and her ghosts are revealed. 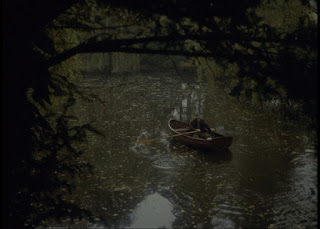 What won me over aside from the gorgeous scenery and haunting atmosphere of the movie was the rather good performance from Angela Pleasance, who was not an actress who starred in a lot of movies, but her slightly awkward demeanor and haunted expressions really sold me on the inner struggle and madness of the character that made for a compelling watch.

Audio/Video: Symptoms (1974) arrives on Blu-ray in the US from Mondo Macabro in the original full frame apsect ratio looking quite nice. The colors are slightly muted by the choice of autumnal colors but look quite nice, the lighting is very low-key and atmospheric  and works for the movie.  Audio comes by way of  clean PCM1.0 Mono track which exports dialogue and woodland sounds very nicely, the score from John Scott comes through nicely as well, optional English subtitles are provided. 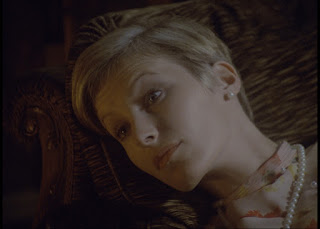 Onto the extras we have the feature length Celia Novi doc On Vampyres and Other Symptoms, a documentary about Jose Larraz which focuses on his movies Vampyres and Symptoms. Also included is a 25-min made for TV documentary piece about the director. Additionally there is a trailer for the movie and interviews with stars Angela Pleasance, Lorna Heilbron and cinematographer Brian Smedley-Aston.

Angela Pleasance fondly remembers her role in the film and working with Larraz, how controlling he was on-set, and also talking about how innocent she was at the time and her refusal to do nudity, plus her thoughts on a nude body double used for her character in the movie. Actress Lorna Heilbron speaks about her early career and home life, speaking about the audition for the role with Larraz, remembering him as a smart and very intense persona. She also speaks a bit about working with horror icon Peter Cushing on Creeping Flesh and what a gentleman he was, which is no great surprise. Cinematographer Brian Smedley-Aston appears for a seventeen-minute interview speaking about his long and storied career beginning as AD on Lindsay Anderson's The Loneliness of the Long Distance Runner - what a sweet first gig, before going onto to work with Nicolas Roeg and working on Jeff Lieberman's drug-horror movie Blue Sunshine as well as Squirm! 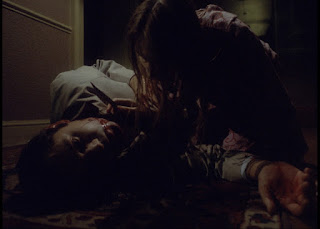 Symptoms (1974) is a movie that simply would have eluded me probably forever if Mondo Macabro hadn't brought it to Blu-ray, which would have been a damn shame. This is a very cool low-key 70s psychological thriller. If you're a fan of Roman Polanski's Repulsion or The Tenant I think this is gonna be something you will want to check out. During my second viewing it also brought to mind a more recent film, Peter Strickland's The Duke of Burgundy (2014) which shared many of the same aesthetic elements, the country mansion, and the woodland location. If you enjoyed that movie but maybe wished it were a bit on the darker side of things I would also recommend a viewing of this one.