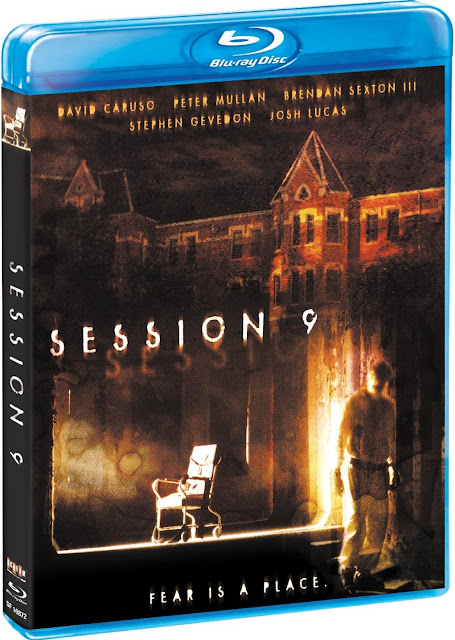 Synopsis: It looms up out of the woods like a dormant beast. Grand, imposing... abandoned and deteriorating, the Danvers State Mental Hospital, closed down for 15 years is about to receive 5 new visitors.Donning protective gear, the men of the Hazmat Elimination Co. venture into the eerily vast and vacant asylum that is filled with an evil and mysterious past. Rampant patient abuse, medieval medical procedures and rumors of demonic possession are some of the many dark secrets the hospital holds – but then so do each of the men.

When I was a kid my dad was employed at the Willard Psychiatric Center in Upstate New York, a place which somewhat oddly loomed large in my youth. With the nearest legit cinema over an hour away I would watch 35mm movies at the asylum in Hadley Hall, an auditorium that served as both gymnasium and a cinema, there was even a bowling alley in basement - the place was very curious. As I recall they ran movies once a month on a Saturday and would screen second run and vintage movies for the patients. There  were usually a handful of other kids there whom I assume had parents who also worked at the asylum. When I wasn't watching movies there I would cut through the sprawling 500 acre grounds on my way nearby Seneca Lake for swimming and fishing, the asylum was perched on a hill overlooking the scenic lake, there was a public swimming area nearby a dock right off the mouth of Pines Creek which offered some awesome fishing opportunities, and in the winter there was a great hill for snow sledding. It seems strange now when I look back at it but the asylum was always there and a part of my life.

I often wandered what life was like at the place for the inmates, the poor souls who lived there who haunted by inner demons. I could not help but wonder what lead to their being left behind in such a place. Did they ever have hope of leaving, did they have family who visited them? My father worked in a more modern building known as Hatch, but I clearly remember the red brick Victorian era buildings from the the previous century which were no longer in use, they were imposing and gave me the creeps when I walked past them. What primitive psychiatric horrors happened there, were they subjected to electroshock and ice bath therapies, did they perform pre-frontal lobotomies there? In my youth I would wonder about these things, and I still do

With those memories still intact I remember watching Brad Anderson's creepy Session 9 for the first time, it brought all those memories all back to me and seriously gave me the creeps, a claustrophobic tale of five men who have been tasked with cleaning up asbestos at an abandoned psychiatric center, eerily similar to the one I grew up next to. Each of the men are struggling with there own problems, though none more so that Gordon Fleming (Peter Mullan) the owner of the small asbestos removal company who put in a low bid to remove asbestos from the Danvers State Hospital, which closed fifteen years earlier after mental health reform and a lawsuit. Gordon is a new father and is burdened with the threat of losing his business along with the rigors of a newborn child at home. Working the job with him are Mike (David Caruso, C.S.I. Miami), Phil (Stephen Gevedon), Hank (Josh Lucas), and Gordon's nephew Jeff (Brendan Sexton III, Welcome to the Dollhouse). right from the start there is animosity between Phil and Mike, as Mike's former girlfriend left him for Phil, a fact that Phil never passes up the opportunity to rub into his face. Jeff is a newbie and a bit of dipshit, and Hank quickly becomes obsessed with reel to reel audio tapes he finds in a records room at the asylum containing a series of audio recordings of therapy sessions with a woman named Mary Hobbes who was a patient at the asylum with dissociative identity disorder, who murdered her family on Christmas day. The creepy sessions are chilling as Hobbes slowly reveals her multiple personalities one by one throughout the course of the movie, first the innocent girl "the Princess", a young boy named "Billy", and the more menacing "Simon" who is reluctant to reveal himself.

As the team gets to work Gordon begins to slowly crumble under the mounting pressure, often stopping to make phone calls to his wife, you get the idea that something bad has happened and he is trying to make-up with her, eventually admitting to his nephew Jeff that he hit her after she accidentally spilled a pot of boiling water on his leg. He's also hearing voices in the asylum, the movie certainly plays a bit like Kubrick's version of The Shining in places. Meanwhile both Phil and Hank are making nightly after hours visits to the asylum pursuing their own private obsessions, Phil having found a stash of valuable in the wall of the basement near the mortuary and Hank is obsessed with those therapy session tapes, staying up all night an immersing himself in the multiple personality madness.

The atmosphere is thick and tense and the setting is a stroke of genius, the dilapidated asylum is a nightmare and the crew needed to do very little to make it creepier, asylum's are creepy places and it's not hard to imagine someone losing their mind while working inside. Things begin to go awry when Phil goes missing after being attacked,  the guy's assume he's just abandoned the job but in quick succession several more of them men meet death at the asylum, murdered by unseen assailant with an orbitoclast, a tool used to perform lobotomies back in the primitive days of mental healthcare.

This is a classic slow-burn slice of cinema with some sweet Kubrick-ian camera works, nice slow camera movements that glide along taking in the Gothic views of the crumbling asylum, the way the movie plays out is slow and masterful, there's a deliberate descent into madness that plays along to the scenes of Hank listening to the therapy sessions with Mary Hobbs, which are among the creepiest damn things you will ever hear in a movie. It may take a bit to get a proper head of steam but sometimes the fun is in the simmering of the movie before it boils over, and when it does finally boil over the payoff is haunting and stays with you for quite sometime, good stuff.

Session 9 (2001) finally arrives on Blu-ray by way of Scream Factory framed in the original scope aspect ratio. The new HD transfer is a marked improvement over the 2002 DVD from Universal. The 1080p HD image is nicely crisp and finely detailed, to a certain degree, the movie was shot on a Sony HD camera in 2001 and the image has limitations but the blacks are nicely deep and the appearance of the image is very pleasing overall, definitely the best it has looked on home video.

The only audio option aside from a commentary track is a English DTS-HD MA Stereo 2.0 and it does the job nicely, well-balanced and crisp, those session tapes of Mary Hobbes are nightmare fuel and the music has some nice depth which adds another layer of atmosphere to an already creepy movie. I am a bit surprised this one does not have a surround sound option, the eerie music score and sound design would seem ideal for a surround mix, but the stereo track sounds just fine. Optional English subtitles are provided.

Scream factory carry over all the extras from the 2002 DVD beginning with a very good if somewhat subdued commentary from Director Brad Anderson and co-writer/actor Stephen Gevedon whom go into some good detail about the creation of the movie, production and stories from the set. Also carried over are a series of Deleted Scenes and an Alternate Ending with the option to view it with commentary by director Brad Anderson who speaks of how the scenes were trimmed following test screenings when a certain sub plot involving a homeless woman living at the asylum proved to be somewhat confusing. Also carried over are a storyboard to screen comparison, an on-set making of featurette and the theatrical trailer for the movie.

New and exclusive to the Scream Factory Blu-ray is a forty-nine minute making of doc with interviews from director/co-writer Brad Anderson, actor/co-writer Stephen Gevedon, actors Josh Lucas, Brendan Sexton III, Larry Fessenden, composers The Climax Golden Twins and director of photography Uta Briesewitz. A lot of what is brought up is covered in the original commentary but there's some great stuff covered, , including creepy stories from cast and crew of strange happenings on-set, including a fleeting suicidal thought and director of photography Uta Briesewitz nearly being lobotomized in a freak accident on-set with a dental drill! It  is pretty clear the place unnerved many of the cast and crew who seem to believe that there may have been something supernatural happening at the asylum.

Also new is an episode of Horror’s Hallowed Grounds with Sean Clark who visits the location which has changed dramatically since 2001, the main building used in the movie has been torn down, but he visits the cemetery and a few locations used in the movie, plus the episode features vintage camcorder footage of the building used in the movie from 2004 before the building was torn down, it is creepy stuff as he and a few others navigate the dark corridors of the asylum in near total blackness, the footage is rough looking but still very unsettling

Session 9 (2001) is a criminally under-watched movie, hopefully this Blu-ray from Scream Factory will bring it to a wider audience which it so richly deserves. The Blu-ray's improved A/V and worthy new special features make an easy upgrade, well worth the money if you're double-dipping on this one, so dig and enjoy one of the creepiest asylum movies out there, very few have done asylum-horror better or creepier, this is a classic slice scary cinema.