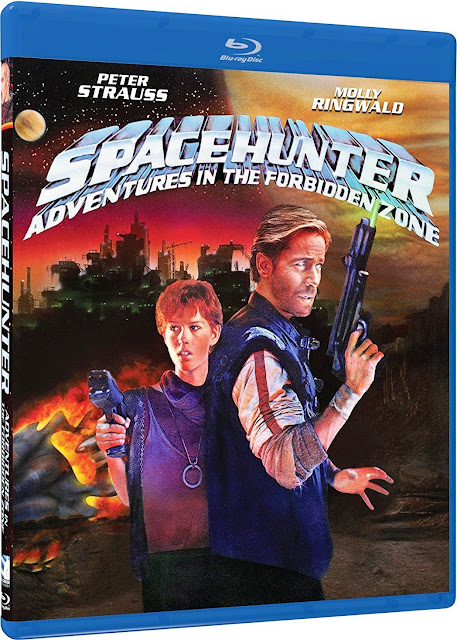 SPACEHUNTER: ADVENTURES IN THE FORBIDDEN ZONE (1983)

Spacehunter: Adventures In The Forbidden Zone hit the cinema back in '83 as part of the 80s 3D revival, the same year as Jaws 3D, Friday the 13th 3D, and Amityville 3D, the Canadian slice of sci-fi was produced by Ivan Reitman a few years before his success with Ghostbusters. It's set in the 22nd century, where somewhere in space a luxury space cruiser explodes and is destroyed for reasons unknown, the lone survivors are a trio of Earth women who escape in a lifepod, they land on a nearby habitable planet, Terra XI, where they are quickly kidnapped by a group of pirate-scavengers known as "scavs".

Out in space salvage ship captain Wolff (Peter Strauss, XXX: State of the Union) receives the call for the safe return of the women, a large credit-reward has been issued for their safe return, so he and his sexy android engineer Chalmers (Andrea Marcovicci, The Stuff) head towards Terra VI, arriving on the planet's surface in a space-jeep, called a "scrambler", but it's not long before poor Chalmers is taken out in a battle with the space pirates, during which the trio of Earth women are stolen away by another group of scavs, a rival faction called the "zoners", who abduct the women via rocket powered hang-gliders!  The Zoners take the women to the planet's half-man/half-machine ruler, Overlord, portrayed by a heavily make-upped Michael Ironside (Visiting Hours), almost unrecognizable under all the prosthetic make-up. Overlord rules the wastelands with an iron-fist along with his evil sidekick, a mad scientist known as The Chemist (Hrant Alianak, Pontypool).

With his android destroyed Wolff is on his own until he meets a spunky Earth orphan named  Niki (Molly Ringwald, Sixteen Candles) who offers to guide him through the wastelands in in exchange for some food and wheeled transportation, together they set out to recover the Earth girls, having to contend with more bands of deformed mutants, amphibious warrior women, and other Mad Max-styled menaces, plus a fellow salvager named Washington (Ernie Hudson, Ghostbusters).

The kernel of this movie probably started off as a pulpy maple-blooded Star Wars knock-off with a rogue salvage captain in space, but somehow it ends up more along the lines of a Mad Max/Road Warrior on another planet with apocalyptic wastelands and vicious, and a bit goofy, desert dwelling menaces. It's cheap, it's rough, and is not very good, but I do find it fun in a bad movie sort of way, if you have any love for the cheapie Italian post-apocalyptic movies like Exterminators in the Year 3000 then this might be worth a watch, but keep in mind that it's PG-rated and there's no blood or gore, this one is pretty sanitized for the kiddies.

Not helping is that the movie is sort of dull, not just the action, but also the visuals are really hit or miss, there's some cool shots in space with miniature ships and corny explosions at the beginning, but this thing anchors on planet Terra VI quickly. There are some cool armored vehicles, mutants with various weapons, and a villainous lair for the Overlord complete with a "thunderdome" styles maze of death, but those exterior shots on the planet's surface are bathed in red which makes it an eyesore to watch, but the shots off the planet's surface and in the interior of caves and alien architecture are kinda cool, like when Niki and Wolff go up against a band of amphibious warrior women, only to be interrupted by a dragon-snake sort of thing, the setting is cool, the women look like extras in the Motley Crue "Looks That Kills: video, but that dragon thing looks damn awful. Sure, we get a cool shot or two, like a cool looking matte painting of the alien skyline, but more often than not the movie fails to deliver, as dull looking as the plot is derivative and confused.

Strauss and Ringwald are just okay, Strauss takes the movie way too seriously, and Ringwald is just an annoying brat who I found hard to stomach, and that's coming from someone who has had a crush on Reinwald from the age of ten! Her character sputters off corny space-lingo like a galactic version of Heather's. She's probably lucky that John Hughes tapped her for Sixteen Candles the following year or she might have ended up in more dreck like this.

This review probably paint a poor image for the film, but it is very bad, but if you like myself find joy in the Roger Corman produced lo-fi sci-fi films of the 70s and you just happen to dig post-apocalyptic dreck, this is not without it's own brand of 80's cheese awesomeness.

Audio/Video: Spacehunter: Adventures In The Forbidden Zone (1983) arrives on Blu-ray courtesy of Mill Creek Entertainment. The film has a bit of a storied history, originally presented in the cinema as a 3D movie framed in 2.35:1, but also screened in 2D in 1.85:1 from what I gather. It has been formerly released on DVD by Columbia Pictures in 2001 in the 1.85 aspect ratio. The presentation from Mill Creek is advertised as 1.78, which is a re-framing, and the image does seem to lose some minor information on all sides when compared to the 1.85:1 framed DVD, which is unfortunate, especially when some are already bumming about the fact that they aren't getting the 3D presentation. When this title was announced I know a lot of the forums were clamoring for a 3D release, but did anyone really think Mill Creek would be going all out for this Canadian slice of sci-fi schlock? The source and transfer look problematic, there's some chunky grain, noise artifacts, and grit and debris to contend with, the image is flat with poor depth and contrast, and fine detail is lacking. The image is not helped by the use of a red filter during the exterior shots on the planet's surface, the interior shots are more pleasing, but not significantly, but at least they're not bathed in red.

Audio on the disc is limited to a lossless LPCM 2.0 stereo track, it's a crisp and clean stereo presentation that handles the action sequences and sound effects with some nice depth, the Elmer Bernstein (Ghostbusters, Heavy Metal) score sounds nicely buoyant. Optional English subtitles are provided. There are no extras on the disc, not even a start-up menu, you slip the disc and it starts to play. While Mill Creek, to my knowledge, have never produced any extras for their releases, unless it was supplied by the licensor, I wish they would maybe do a signature series with a few extras for fans, they have a decent catalog to pull from and it's a great value-add. One thing they did right was the artwork, totally digging the illustration, a big improvement over the 2001 DVD in my opinion.

Spacehunter: Adventures In The Forbidden Zone (1983) is a pulpy post-Star Wars slice of Canadian schlock cinema, there's maple flowing through it's veins, but there's also a healthy dose of cheese. It feels more like a PG-version of an Italian post-apocalyptic Mad Max knock-off than a Star Wars knock-off, this is sub Ice Pirates stuff, but if you love bad b-movies this should fit the bill for a Friday night cheese-fest. The disc from Mill Creek is not great, but it is a slight improvement over the previously available DVD, but not by much, it's presented in the wrong aspect ratio and with no extras, not even a trailer. If you can find it for under $10 this might be worth the upgrade, it's also available on DVD as a double-bill with 80's fantasy film Krull from Mill Creek. 2/5