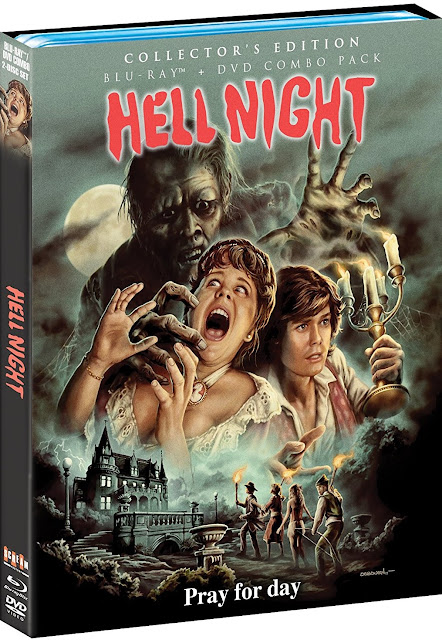 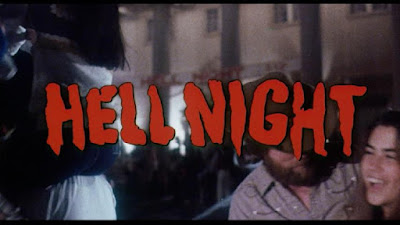 The Tom DeSimone (Reform School Girls) directed Gothic-slasher Hell Night (1981) was one of those horror titles on VHS that beckoned you in with that amazing illustrated artwork of Linda Blair's busty character clutching those iron bars, a look of terror on her face, her mouth agape with a silent scream, it was the sort of Gothic image that gave you goosebumps by day and nightmares by night, at least it did for me. The flick received a a DVD release from Anchor Bay back in 2002, it went out of print fairly quickly, and was fetching steep prices on eBay which kept it out of grasp until 2013 when I found a minty used copy at a DVD Exchange in San Antonio, Texas while on a business trip, it was only $7 and I was getting the sweats with anticipation as I walked to the counter for a fast purchase, feeling that I had really got one over on them, yes, the joys of movie collecting. That was the last U.S. home video release of the film on digital, right up until Scream Factory announced this 2-disc Collector's Edition sporting a 4K restoration and loads of extras. 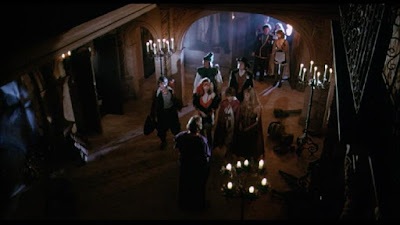 The movie has a very simple storyline, we have Peter, the president of the Alpha Sigma Rho fraternity who every year initiates new pledges by having them stay the night at the eerie Garth Manor, where they have to stay locked away behind the iron gates until daybreak. The pace has been vacant for the past twelve year, ever since the former owner Raymond Garth murdered his wife and three deformed kids before hanging himself. The four pledges this year are slightly uptight Marti (Linda Blair, Chained Heat), nice guy Jeff (Peter Barton, Friday the 13th: The Final Chapter), fun girl Denise (Suki Goodwin), and surfer dude Seth (Vincent Van Patten, Rock 'N' Roll High School). The foursome are escorted to the mansion with some collegiate fanfare before being locked in for the night. They couples pair off quickly with Seth and Denise almost immediately heading to the first bedroom they can find for a quick and fun hook-up while Marti and Seth get friendly in a decidedly more chaste sort of way in front of the living room fireplace, which couldn't have been easy for Seth, that revealing bodice worn by Marti is the perfect showcase for two of prime-era Linda Blair's top-shelf assets, but he plays nice, but the two definitely have chemistry. 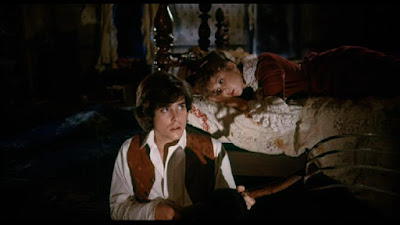 Under the cover of darkness Alpha Sigma Rho president Peter (Kevin Brophy, Time Walker) and his girlfriend May (Jenny Neumann, Stage Fright), plus frat-brother Scott (Jimmy Sturtevan) show up to put some fright into the pledges night, having rigged the home with pranks and pre-recorded screams, with Marti seeing the spooky projected image of what she believes to be the ghost of the murderous patriarch Raymond Garth, and Seth is started by some canned-screams. 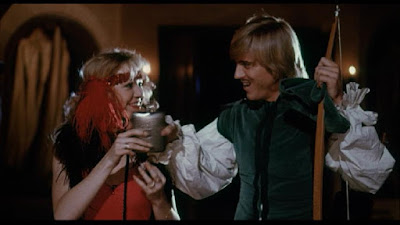 The three roof-top pranksters are killed off in fairly short order by an unseen killer who doesn't seem too pleased to have visitors on the sprawling estate, soon enough we have someones head  twisted all the way around by the neck-snapping brute, while poor May is decapitated with an ax after being dragged into a tunnel. When Peter discovers his dead friend he makes a good run for it but is cut-down with a scythe in the mansions hedge maze - all good stuff, maybe not particularly gore-heavy but certainly heavy on the Gothic atmosphere and well-staged kills. 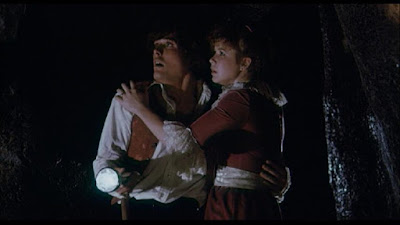 Pretty soon our four formerly oblivious  pledges get in on the murder-fun when one of them is discovered decapitated and a panic ensues as they fret over what to do next, with one of them attempting to climb over the high iron gates that surround the mansion, which is tipped with razor sharp points. The rest of the group come under attack and discover a series of tunnels beneath the mansion, which they unwisely descend into (bad idea)while contending with a deformed, hulking killer. 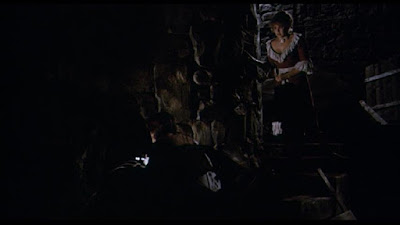 Hell Night came out at the height of the slasher cycle, 1981 was a heck of year for the genre giving us The Burning, Friday the 13th Pt. 2, My Bloody Valentine, Happy Birthday To Me and The Prowler just to name a few choice cuts. However, this one doesn't go for the grisly over-the-top bloodletting, instead we get some fun characters who are actually cool people, even the frat guys aren't evil douche bags, everyone tries to do the sensible thing for the most part - though there are exceptions, going down that tunnel was just a bad idea, and while I commend one of them who managed to escape to find help, he chose to do the right thing and returns by himself when the local police fail to believe his story is anything but a fraternity prank, but I would not have returned myself, sorry friends you're shit-out-of-luck tonight! The film has some great Gothic atmosphere throughout, on the mansion grounds, down in the tunnels and main house are a great set-pieces, the fact that all the characters have just come from a frat costume party means they're in period costumes, highlighted by Blair's choice bosom-blossoming bodice, further pushing the Gothic tones. The premise is very simple, and it works great, while some would say this is slow I say it's a slow-boiler, leading to a frenzied final terror-spree that has always worked for me. Something else that works for me is the playful sexuality of Suki Goodwin as party-girl Denise, who was just gone too soon for my taste! Another winner of an idea is the killer, a hulking simpleton, a remnant of the doomed Garth family, a bit along the lines of the island-shocker Humongous (1982) with just a twist of the backwoods-slasher Just Before Dawn (1981). Hell Night is a top-tier Gothic-tinged slasher, oozing atmosphere and spilling over with ample charms of Linda Blair, essential stuff, this is a top 20 slasher for me.

"A Note About Our New 4K Scan:  We did an extensive search for the original film elements, but were unable to locate them. Therefore, this new transfer comes from a 4K scan of the best surviving archival 35mm film print of Hell Night. We did extensive color correction and film restoration to clean up any film damage. Because the print was missing some minor footage, so we have inserted a small amount of standard definition footage to deliver the complete film. We hope you enjoy this new restoration of this ‘80s horror classic." 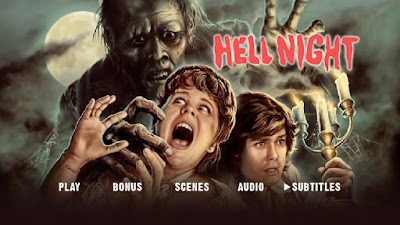 Well, there you have it, Scream Factory have been very upfront about this 4K restoration is not being sourced from the original negative or an even interpsoitive source, it's a scan from a 35mm theatrical print, so go into this with some tempered expectations about the picture quality. It's my understanding that there's only so much you can do as far as color correction from an actual print, so there's gonna be a lot less fine detail than one would hope for from a modern HD presentation, but I am assuming the Scream did their due diligence and looked for a better source, but this is what they found, and what they have to offer - like it or lump it.  So what happened to the original vault elements for the movie? Legend has it that the rights owners defaulted on payment to the facility that housed the orginal negative, the facility sold the elements at auction and they have not been heard from since, if you know different please let me know, I'd be keen to know what the real story is. You should also know that the theatrical print they found was incomplete and they had to resort to adding in standard definition inserts to make this as complete as possible. 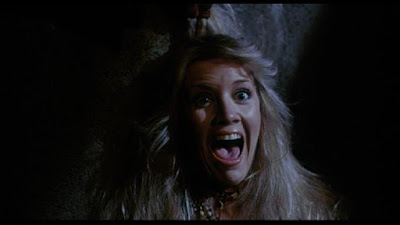 So now that we have that out of the way, how's the damn thing look? With tempered expectation I was  pleased with what I saw, it has debris, there's print damage and a prevailing softness/darkness about it, but the colors are decent, but it's not crisp at all, a deficit  perhaps bolstered by the 80's soft focus cinematography. Some scenes are fairly grainy while others looks like perhaps a bit too much DNR had been applied to specific scenes, but it's not across-the-board digitally scrubbed by any means. The worst offenses would be some green emulsion scratches that mar a few scenes, and when the standard definition inserts show up they do not blend well, not so much that the color correction is off (it is) or that the quality dips (it does), but that the frames do not align seamlessly, the transitions from HD to SD are jarring, but not so much so that it was ruinous for me, but annoying.    Overall I think this is a decent upgrade from the long OOP Anchor Bay DVD as far as extras go, Scream Factory did the best they could with the inferior elements they had to work with, and I for one am pleased with it. I will say that I am in no hurry to trade in my Hell Night Anchor Bay DVD though, honestly I like the colors more on the DVD, the theatrical print is soft and the colors are thin in spots, I am curious what source AB used for their DVD back in 1999.
The sole audio option is an English language DTS-HD MA Mono 2.0 with optional English subtitles. Dialogue, the Dan Wyman (Without Warning) score and effects are well-mixed, it's not gonna give your 7.1 surround any sort of work out, but it's free of distortion and pops. 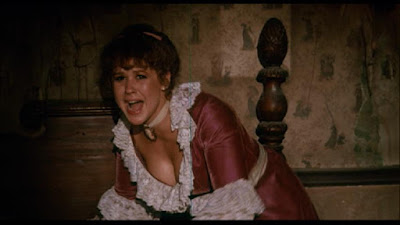 This 2-disc release comes housed in a standard 2-tray Blu-ray keepcase with a sleeve of reversible artwork featuring the classic illustration on the a-side and a killer new illustration from Scream Factory regular Justin Osbourn, both featuring the "Pray For Day" tagline, I loved it, amps up the Gothic feel of the film and keeps Blair's bust line front and center, the discs themselves features excerpts from both artworks. 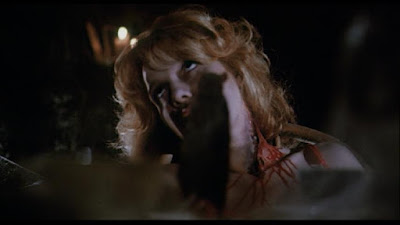 What's not to love about Hell Night (1981)? It's an atmospheric Gothic-tinged slasher starring Linda Blair in her sweet-sweet prime, we get a fun frat-prank set-up, some good kills and an electrifying-frightful finale. The new Collector's Edition Blu-ray from Scream Factory is an upgrade over the Anchor Bay DVD and has loads of great extras - this sucker is stacked, and despite the PQ not being up to snuff I commend Scream Factory for finally bringing this beast to Blu-ray and stacking it to the tippy-top. 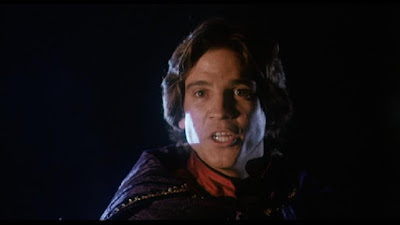 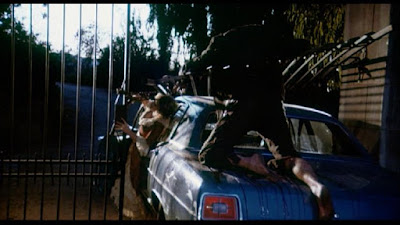 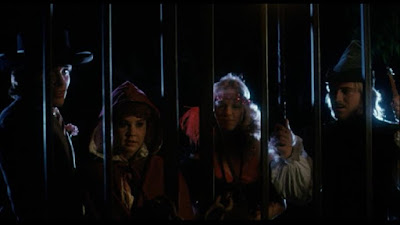 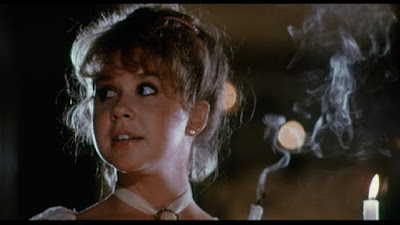 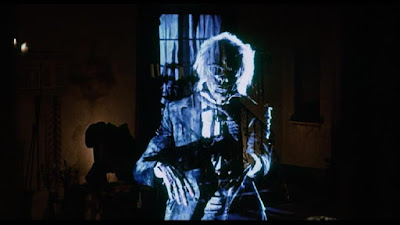 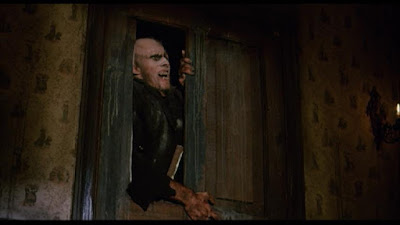 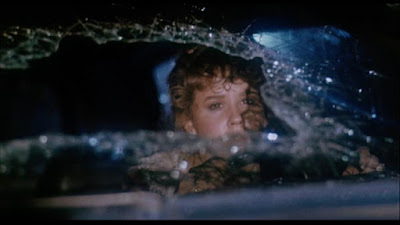