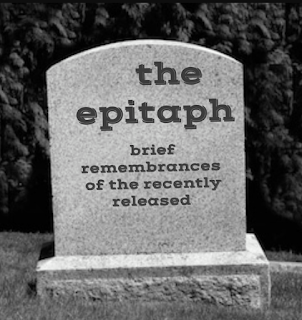 A new capsule review blog post, this week were looking at releases from Mill Creek Entertainment, a label long associated with budget collections you could buy on the cheap, they really knew how to stretch your movie dollar! These last few years though I think they've come a long way from the old days with attractive Steelbook releases of Flatliners and Metropolis, slipcases and even producing a some new extras - like a commentary track on their Shakes the Clown Blu-ray, and/or carrying over some old extras for their licensed titles, which is not something they did a whole lot of. This past October they released a Walmart exclusive, a handful of titles with Retro-VHS styled slipcovers, notably 80's slasher Happy Birthday To Me (1981) and 80's sex-comedy Hardbodies (1984), and while they're Walmart exclusives for now they will be available everywhere beginning January. They've also announced that in February they'll be releasing Neighbors (1981), Legend of Billie Jean (1985) , Songwriter (1984) and Sheena (1984) on Retro-VHS Blu-ray. 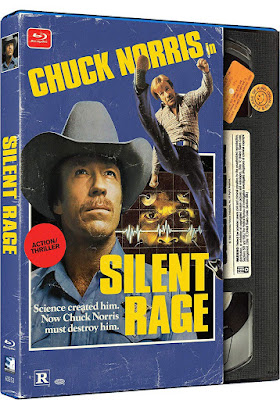 The tagline for this sci-fi action/slasher film says everything you need to know about this film, "Science created him. Now Chuck Norris must destroy him." Silent Rage answers the burning questions of what would it be like if Chuck Norris took on Michael Myers? Norris stars as a Texas law man who at the start of the film takes down a violent man named John Kirby (Brian Libby) who just ax murdered his family, he's rushed to a clinic where Dr Tom Halman (Ron Silver, The Entity) tries to save his life, but he dies on the table, so they decide to inject him with a serum designed to reanimate living tissue, which it does, the killer comes back from the dead, even more disturbed than before and damn near unstoppable. Now it's up to bad ass Chuck Norris to bring him down as the bodies begin piling up. Silent Rage isn't loaded with gore but it does have enough slasher tendencies, ass-kicking, and biker babe titty action to make for a fun watch. Be on the lookout for appearances from Stephen Furst (Animal House) as Norris's chubby deputy sidekick and William Finley (The Phantom of the Paradise) as one of the unethical docs who bring the killer back from the dead. No extras for this one, but we do get a cool-looking Retro-VHS slipcover. 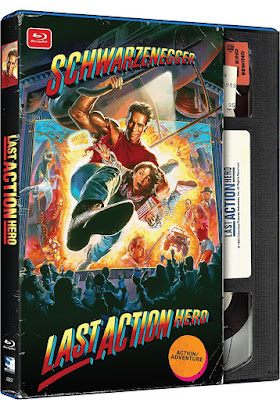 Action-film send-up Last Action Hero re-teamed Director John McTiernan (Die Hard) with Arnold Schwarzenegger (Terminator) for the first time since Predator, it tells the story of an action film obsessed kid named Danny whose favorite film star is Jack Slater (Schwarzenegger), the kids loves him and sees every screening of his movies at the local movie house. When the cinema's projectionist (Robert Prosky, Christine) invites him to an advance screening of the star's latest film the kid is beyond excited, but during the screening his is magically sucked into the world of the film, so he sets about helping his hero solve crimes. PG-rated and a bit goofy the film is loaded with playful send-ups and winks to other action films, with the kid trying to convince Slayer that he's a movie character, eventually bringing his hero into reality, but also dragging along one of Slater's arch villains, an ax murder named the Ripper (Tom Noonan, Manhunter) which leads to all sorts of fun at the Hollywood premiere of Slater's film. The film is fun but goofy, the straight-up comedy of it put me off seeing it back in the 90's, so this was a first time watch for me, but I dig it, lots of fun and a no-brainer for Schwarzenegger fans who want to see the guy poke fun at himself. No extras for this one either, but we do get a cool-looking Retro-VHS slipcover, and it should be noted we get a lossy audio for this one with only Dolby Digital option. 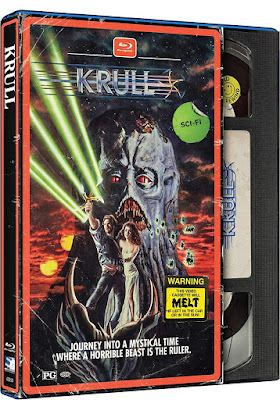 Krull was a cable TV favorite of mine as a kid, a blend of sci-fi and fantasy, a tale of good versus evil, and when evil in the form of "The Beast" makes off with a Princess Lyssa (Lysette Anthony, Dracula: Dead and Loving It) on her wedding day Prince Colwynn (Ken Marshall) ust quest to save her. He recovers a fabled throwing weapon called the "glave", and a band of like-minded mercenaries by way of a shape shifting sorcerer, a group of bandits - which includes Liam Neeson (Darkman) and Robbie Coltrane (the Harry Potter films) - and a cyclops. Together they brave the outer reaches of their lands entering dark forests and battling legions of evil, including minions of the Beast called "slayers", as well as shape shifting changelings and giant spiders. It's all good stuff, along the lines of Lord of the Rings with a sci-fi bent to it, lots of fantastic special effects and perilous adventure. As a kid the one thing that irked me was the the spinning, bladed weapon the "glave" was not used enough, it was so cool and I wanted more of it. The "Beast" is also only glimpsed, sort of obscured by a shroud of fog, it looks cool but is kept hidden away for much of the film, but I love everything else about the film, a fun quest film with a lot of nostalgia for me. There are no extras on the disc but the 1080p HD image looks solid and sounds great, plus it includes a Retro-VHS slipcover with the original one-sheet movie poster on it. 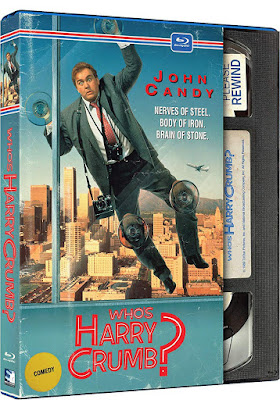 When the daughter of billionaire P.J. Downing (Barry Corbin, Critters 2) is kidnapped he turns to a family friend Eliot Draisen (Jeffrey Jones, Beetlejuice) whose in the P.I. business for help, who recommends for his own covert reasons recommends inept P.I. Harry Crumb (John Candy, Summer Rental). The red-haired Crumb is a real goof, an awful private eye, but he ends up teaming with Downing's younger daughter Nikki (Shawnee Smith, The Blob) and the pair begin to unwrap the identity of the kidnapper, sort of. A fun bit of goofy-sleuthing with the ginger-haired Candy offering up hijinks and disguises, plus we have Annie Potts (Ghostbusters) as the billionaires vapid wife, cheating on her clueless hubbie with her dimwitted tennis instructor, played by Tim Thomerson (Trancers). Not the best of Candy's work but I'll take it, directed by Candy's SCTV alum Paul Flaherty - the brother of Joe Flaherty (Used Cars), the film is a lot of goofy fun with Candy turning in a solid performance, even if it seems to be riffing on Fletch a bit, fun stuff, great to see it finally get a Blu-ray 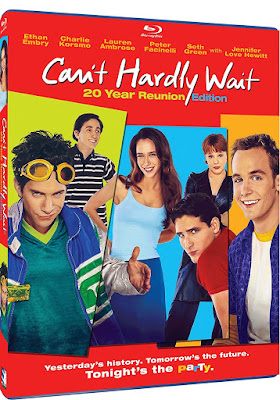 release. No extras but we do get a Retro-VHS slipcover.

During the late-90's teen movie cycle I was at the cinema with my wife watching most of them, Can't Hardly Wait (1998) was one of those, coming a year before American Pie, a night-in-the-life teen movie about a post-graduation party that is not to be missed. Awkward Preston Meyers (Ethan Embry, The Devil's Candy) hears at graduation that his girl-crush Amanda Beckett (Jennifer Love Hewitt, I Know What You Did Last Summer) has been dumped by her douche-nozzle boyfriend Mike Dexter (Peter Facinelli, Supernova), igniting his hopes of reigniting some connection he thinks they had freshman year, something have to do with bonding over a strawberry Pop tart, oh brother. It's full of teen movie tropes and stereotypes but that's why we watch these sort of things anyway, right? I was never one to obsess of Jennifer Love Hewitt the way a lot of guys do, she never did anything for me, but a few years after this film I was pretty obsesses with red-haired Lauren Ambrose during her stint on the phenomenal mortuary drama Six Feet Under, and Ethan Embry was probably the most recognizable face to me, a fan of his from Empire Records, Vegas Vacation and That Thing You Do. However, it was hip-hop culture obsessed Kenny Fisher )Seth Green, Ticks) who stole the whole damn movie for me, so funny, playing a character I think we all knew/know in our real lives, that one white guy who outright appropriates black culture to a ridiculous degree. Also making a notable appearance is Charlie Korsmo (What About Bob?)as the leader of a trio of nerds who attend the party hoping to ruin Mike's life in a weird Heathers-esque gay themed revenge, but manages to become one of the most popular kids at the party after performing a wild rendition of GNR's "Paradise City". This looks to be a port of the 2008 Sony Blu-ray with the same set of extras - minus the trivia track, plus it comes with a slipcover with the original movie poster.

Special Features:
- Original Commentary with Filmmakers and Cast
- Commentary with Filmmakers and Cast - 10 Years Later
- Huntington Hills - Class of '98 Reunion (26 min)
- Can't Hardly Wait: The Making of a Teen Classic (14 min)
- The Life of the Party (9 min)
- Deleted Scenes (7 min)
- "I Can't Get Enough of You" by Smashmouth Music Video (3 min)