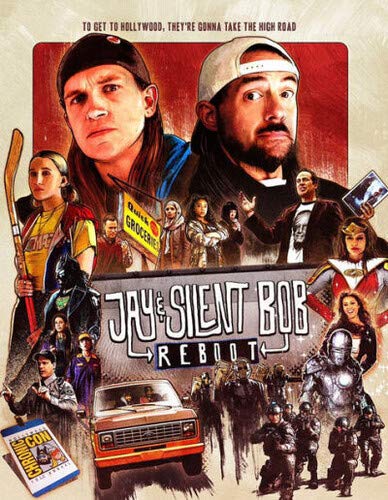 Jay & Silent Bob Reboot (2019) opens in (who the fuck is Leonardo?) Leonardo, New Jersey with the titular stoner-duo Jay (Jason Mewes) and Silent Bob (Kevin Smith) getting busted by a SWAT team for operating an illegal weed-store, disguised as a chicken joint called 'Cock-Smokers', in the old RTS Video location right next to the Quick Stop. afterward they're in court being arraigned when a defense lawyer (Justin Long, Zack & Miri Make A Porno) shows up from out of nowhere to clear their names, then turns around and through some legal-swindling steals the rights to their names, clearing the way for evil Hollywood entity Saban Films (Mighty Morphin Power Rangers) to use their names and likeness in a new Bluntman &amp' Chronic reboot, starring Val Kilmer (The Doors) and Melissa Benoist (TV's Supergirl)  without paying them any royalties.

What transpires next is Kevin Smith basically regurgitating the events of Jay & Silent Bob Strike Back to make a self-aware commentary on Hollywood's penchant for reboots and remakes with the stoners embarking on a road-trip to the annual Chronic-Con convention in Hollywood to disrupt the making of the film. The reboot is being directed by Kevin Smith, pushing the elasticity of this meta-nostalgia stoner-fantasy to it's limits. Along the way  Jay reuniting with Justice (Shannon Elizabeth, American Pie), discovering he has a a teenage daughter named Millennium Faulken (get it? of course you do) played by the director's daughter Harley Quin Smith of Yoga Hosers.

While it is true that this is a retread I cannot deny that I have always been a fan of Smith's catalog of films, catching Clerks and all of his ensuing theatrically released films in the cinema first-run, I am an unashamed fan of this stuff. I am a juvenile man-child and I  enjoy the Smith's sophomoric and juvenile sense of humor, his films more often than not have been sort of dumb but have also always had heart, and this latest excursion into the land of dumb has a bit more of a sentimental heart than usual. It's great to see Jason Lee back as Brodie from Mallrats offering an explanation of the difference between what a reboot and a remake are, and we get the return of Ben Affleck to the View Askew-niverse as Holden McNeil from Chasing Amy, giving a rather touching monologue about fatherhood. The film is a non-stop parade of characters cameos from the larger View Askew-niverse, including Brian O'Halloran as Dante Hicks from Clerks,  Joey Lauren Adams as Alyssa 'Finger-Cuffs' Jones from Chasing Amy, Smith's wife Jennifer Schwalbach Smith from Jay & Silent Bob Strike Back, and he's even shoe-horned in Matt Damon's fallen-angel Loki from Dogma, basically appearing here for an groan-worthy Jason Bourne-pun.

This is not the sort of film that is gonna pull in any new fans for Smith, he's a niche director with a die-hard fanbase of which I am one, and this film gave me more or less what I was expecting, and looking for. In a very dumbed-down way this is the Avengers: End Game of the View Askew-niverse, sort of pulling in and tying off story lines, and giving the lovable stoner-duo a very tiny bit of maturity. That said, it doesn't all work, it's all a bit too-goofy, but I love revisiting these characters and I enjoy the self-referential humor and winking at the fan-base that the film provided.

Audio/Video: Jay & Silent Bob Reboot (2019) arrives on Blu-ray from Lionsgate framed in 2.35:1 widescreen and presented in 1080p HD. This is a generally pleasing image throughout, shot low-budget on what looks to be digital the source is in excellent shape. Colors are vivid, we get good depth and clarity throughout, fine detail is also pleasing.

Audio comes by way of an English DTS-HD MA 5.1 surround that offers clean reproduction of dialogue and score, the surrounds offer a modest bit of immersion but this is a dialogue driven film and it keeps thing more or less anchored in the front speakers, optional English subtitles are provided.

Extras on the disc include 59-min of cast and crew interviews with, another 29-min of Smith interviewing Rosario Dawson and Jay interviewing the crew of the film.  There are also 9-min of bloopers and 2-min reel of hair-related outtakes.

Surprisingly we do not get a commentary track from Smith which was a bit disappointing. The single-disc release comes housed in a eco-case keepcase with a single-sided sleeve of artwork. Inside there's a redemption code for a digital copy of the film.   Special Features: - Cast Interviews (59 min) - Kevin & Jay Interview Cast & Crew (30 min) - Bloopers (9 min) - Hair Reel (2 min)

I think I can safely say that Jay & Silent Bob Reboot (2019) is  for fans-only excursion, just by it's nature it's gonna have limited appeal, but for we fans who enjoy Kevin Smith's body of work it has a lot to offer, even if it's just a lot of silly sight-gags, nostalgia and Smith's penchant for over-sentimentality, and that's enough for me.