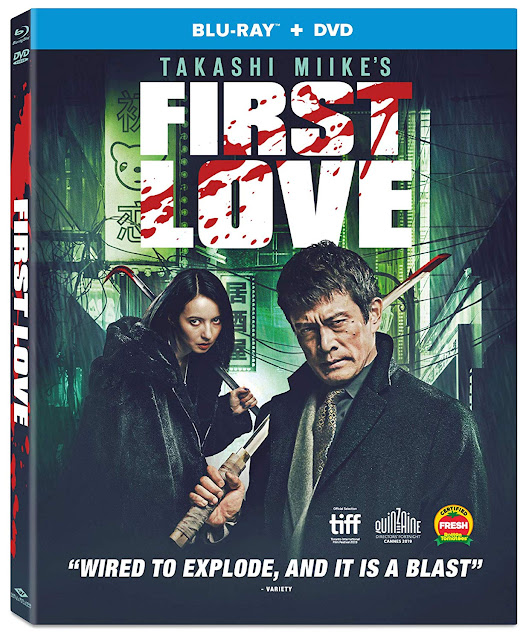 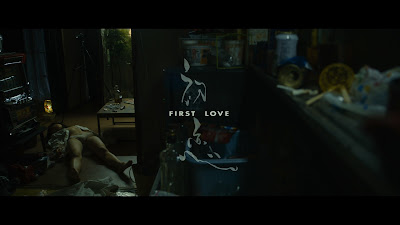 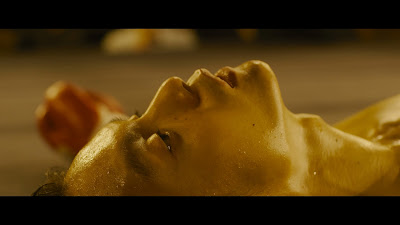 In Takashi Miike's First Love (2019) the legendarily prolific filmmaker - over 100 films so far and still going! - returns with a another violent yakuza tale, this time about an promising amateur boxer named Leo (Masataka Kubota) who finds himself mixed-up in a Yakuza double-cross involving a lower-tier Yakuza wannabe named Kase (Shôta Sometani) stealing drugs. Leo's been diagnosed with a potentially fatal tumor and is wandering the streets contemplating his mortality when he meets drug-addled yakuza prostitute Monica (Sakurako Konishi), who unwittingly is an integral part of of Kase's plan, a plan which goes to shit almost immediately when he accidentally kills Monica's pimp Yasu (Takahiro Miura) while stealing the meth. This causes Yasu's girlfriend Julie (Becky) who transforms into a female terminator-styled bad-ass in her relentless pursuit to kill the treacherous Kase. 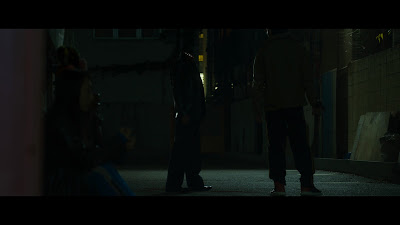 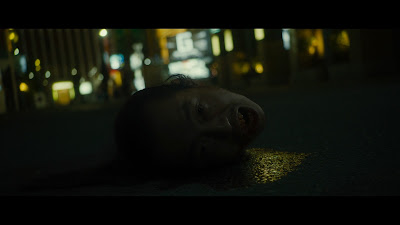 There's a lot of moving parts in this 'it-happened-one-night' crime tale, with dueling crime bosses, the ghost of Monica's dad, and a crooked cop mixed up into it. I thought the first third of the film was a bit on the slow side as Miike languidly weaves together the various character threads that will eventually intersect, but as they begin to intertwine an electrifying series of events unfold, though not with the amount of ultra-violence and bloodletting I might have been expecting from the director. 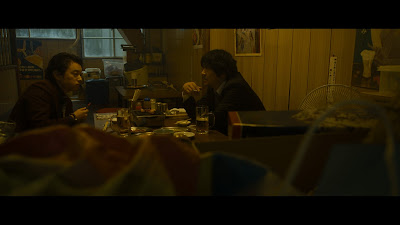 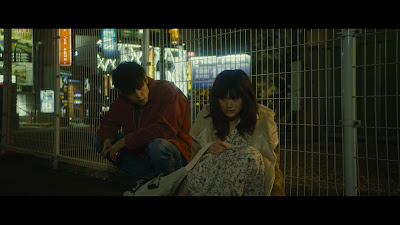 That's not to say we don't get a handful of the good stuff, there's plenty of bloody gunshots, various limbs being hacked off and even a tasty decapitation in the first few moments of the film, but it's not the focus of the film, with the director content to zero in on quirky little love story about that's at the center of it all. 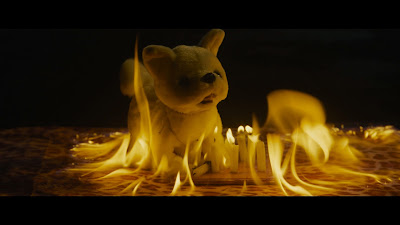 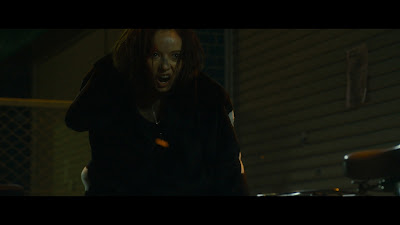 Something else I was not expecting was the amount of humor in this film, this is basically a Yakuza crime-comedy to a large extent, also managing to mix in a thin supernatural element tied to Monica's addiction, and the finale offers a fantasy-fueled element with some eye-popping neon-animation, the sprawling film certainly has got a lot going on. For me the element that brought the biggest smile to my face was the unstoppable force that was the vengeance
fueled Julie, as I said before she becomes a bad-ass terminatrix in her pursuit of the guy who killed her boyfriend. It's established
early on that she's a woman who can take care of herself, going onto prove that point with her uncanny knack for escaping death, further highlighted when she escapes a Rube Goldberg-style murder-by-arson plot to kill her. 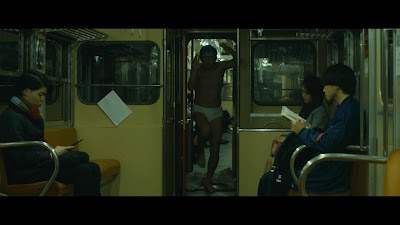 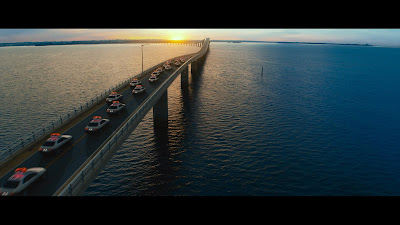 Audio/Video: First Love a(2019) arrives on Blu-ray from Well Go USA who present the film in the original aspect ratio of 2.39:1 widescreen in 1080p HD. Shot on digital the film looks very good, the color-grading is all over the place with lots of atmospheric lighting effects, including a sickly yellow pallor to some scenes that I thought was rather ugly, but I didn't see any issues with compression or artifacting. Blacks were adequate but not particularly deep or impenetrable, but depth, clarity and fine detail were pleasing throughout if not altogether consistent based on the changing lighting set-ups. 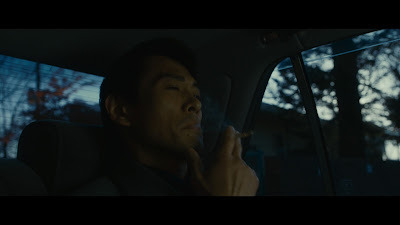 Audio comes by way of Japanese DTS-HD MA 5.1 or English-dub with optional English subtitles. The surrounds add to the cityscape atmospherics, dialogue is crisp and clean, and the score is well-balanced. The English-dub is not too bad, it's lacking the acoustic nuance of the original Japanese, but if you're one of those that are adverse to non-English dialogue and hate reading subtitles  it's a solid option. 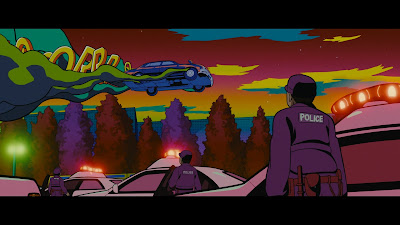 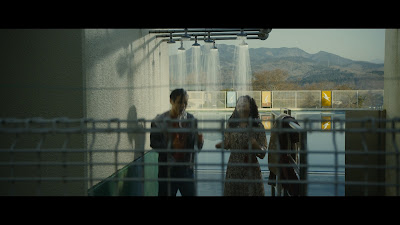 The only extras on this disc are a handful of trailers from Well Go USA that run about 3-min. With over one-hundred film and counting director Takashi Miike is far too busy making movies to be giving interviews and commentaries about them! The 2-disc Blu-ray and DVD combo arrives in a standard keepcase with a single-sides sleeve of artwork, the same artwork is featured on the slipcover.


More Screenshots from the Blu-ray 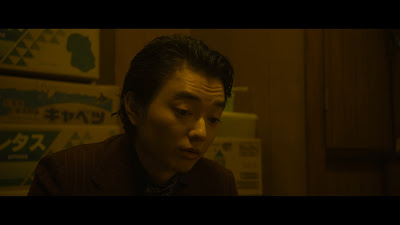 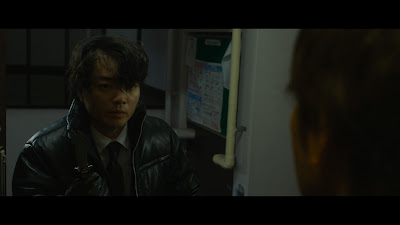 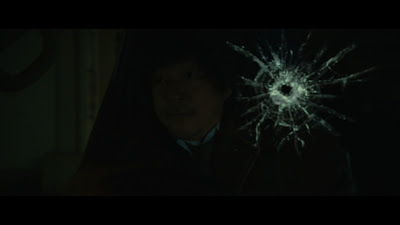 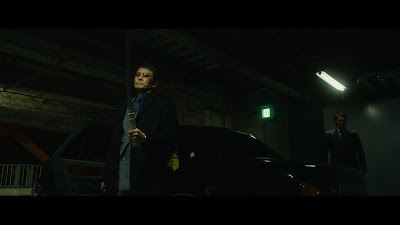 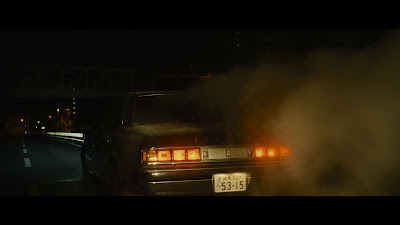