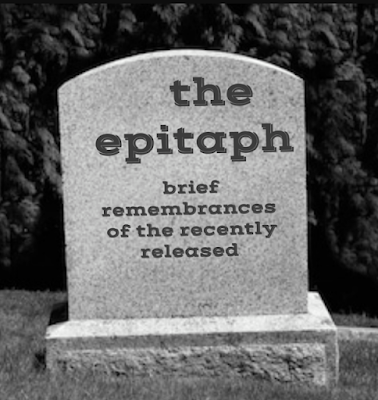 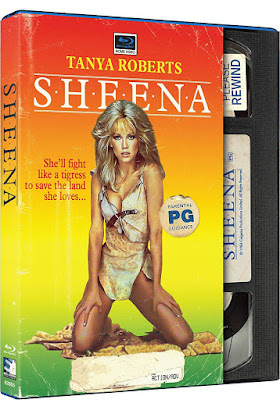 Synopsis: Journey to deepest, darkest Africa for thrills, romance and high adventure! Orphaned in Zambouli territory, the blonde Sheena (Tanya Roberts) is raised by a noble tribe and taught to communicate telepathically with all creatures. She gets a firsthand lesson in love from Vic Casey (Ted Wass), a wisecracking TV journalist. In Africa for a story on a royal football player, Prince Otwani (Trevor Thomas), Vic soon finds himself embroiled in a web of political intrigue. And when the evil prince decides to invade the Zambouli' land, it is up to Sheena to rescue Vic and save her idyllic kingdom!

I was just barely out of the single-digits when Sheena (1983) came around and I remember thinking that 'oh, they made Tarzan into a woman, cool.' Watching it back then I loved it, pretty sure it was my first dose of PG-nudity, which back then was not that uncommon. it's a guilty pleasure of the 80's variety with some fun action sequences and cool scenery, shot in Kenya the backdrop makes for good viewing, but the dialogue and plot of this pulpy stinker are atrocious. That said, Tanya Roberts (The Beastmaster) is easy on the eyes, a gorgeous looker swinging through the jungle, and telepathically calling to wildlife for save her ass and whatnot, but her lines deliveries, which to be fair are written awful, sound atrocious. The film arrives on Blu-ray from MCE looking a lot better than the previous DVD which was pure shit, but in all honesty this new HD presentation surely won't win any A/V awards, it's got plenty of issues, but is an improvement over what came before it. As part of MCE's Retro-VHS series it comes with a slipcover with some fake wear around the edges and rental store stickers, which is cool-looking. The sleeve of art on the keepcase is different than the slip, mirroring the previous DVD artwork. 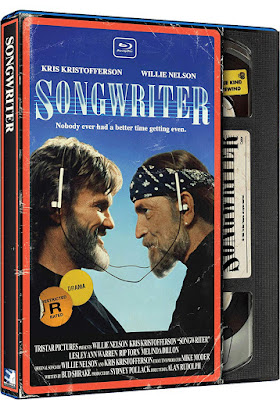 Synopsis: Willie Nelson and Kris Kristofferson as a pair of hard-living Texans in this funny, original and very real look at the country music business. Doc Jenkins (Nelson) may be one of C&W's most beloved stars, but his private life is a wreck. He's split up with his longtime partner, Blackie Buck (Kristofferson), a country outlaw with a heart of gold. Doc's singer-wife, Honey Carder (Melinda Dillon), has thrown him out of the house. And now he's gotten involved with a sleazy music manager, Rodeo Rocky (Richard C. Sarafian), who's out to steal his material. Teaming up with Blackie, Doc takes drastic measures to win back his family and reclaim his songs. It's Willie and Kris, on the road again, making music and raising hell!

Songwriter (1984) stars country legend Willie Nelson as a country performer/songwriter who feels royalty cheated by his seemingly unfair publishing deal with his publisher. He strikes out on his own, after burning down his former business, and starts up a new record label, signing a promising up and coming country starlet named Gilda, and hitting the road with his country singer pal (Kris Kristofferson) with plan to double-cross his litigious publisher. I fun bit of country-fried comedy and satire here, Nelson and Kristofferson are very likable, affable guys out on the road earning a living, with plenty of hard-drinkin', groupies and decent country songs to keep me plugged in for it's duration, which coming into I was not expecting, and it was great to see Rip Torn here in another country music film, he having stared in the hard-drinking, hard living' film Payday (1972), which is you're a fan of this film I highly recommend. Songwriter (1984) arrives on Blu-ray as part of the MCE Retro-VHS line-up, looking solid after an initially rough looking credit sequence in 108op HD with lossless audio, with a slipcover and different artwork on the wrap. 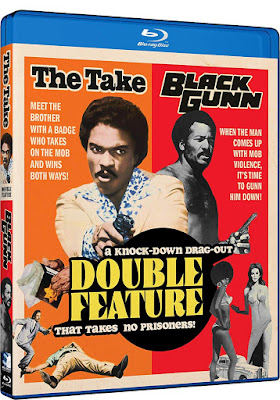 Here we have a pair of blaxploitation films directed by Brit Robert Hartford-Davis who directed Corruption (1968) with Peter Cushing which is a bit of an underrated gem. I wouldn't say either of these were on par with Corruption in my opinion, but it was still a solid watch, having not seen either before. In The Take (1974) a pre-Star Wars Billy Dee William plays a smooth San Francisco cop on the take, assigned to a drug investigation in New Mexico where he working both sides of the law. The film also stars Eddie Albert (The Devil's Rain) and Vic Morrow (Twilight Zone: The Movie) as a strange crime kingpin, also be on the lookout for Sorrell Booke, Boss Hogg from The Dukes of Hazzard TV show! Black Gunn (1972) stars former pro-footballer Jim Brown (Mars Attacks) as a nightclub owner whose younger brother is killed after stealing a valuable book from the local crime lord, played by future Oscar-winner Martin Landua (The Being)! The nightclub owner teams-up with a militant African American organization known as BAG (Black Action Group) to revenge his brother's death. This is the better half of this double-bill in my opinion, plenty of gritty action and more traditional blaxploitation thrills, also featuring bearded Bernie Casey (Dr. Black, Mr. Hyde) as part of the Black Action group, and Bruce Glover (Chinatown) as a maniacal baddie working for the mob. No extras or slip on this one but the 1080p HD widescreen presentations licensed from Sony look solid. 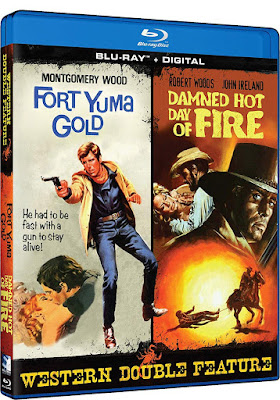 Fort Yuma Gold (1966) aka "For a Few Extra Dollars" concerns a fanatical Southern soldier who refuses to stop fighting even though the war has ended, a sore loser indeed, he plans to launch a sneak attack on Fort Yuma, but a a captured confederate soldier agrees to a mission to thwart the diabolical confederate low-blow, along the way teaming-up with the aptly named saloon girl, Connie Breastfull, who threatens to derail the mission. The second half of this double-bill is Damned Hot Day of Fire (1968) aka "Gatling Gun", a film that rewrites a bit of American history for it's plot, wherein the inventor of the Gaitling Gun which can fore 300 rounds per minute has been kidnapped. His invention for meant to aid the North to victory might just have landed in the hands of the South, so the Pinkerton Agency sends to track it down. Plenty of violence abounds here in this western-spy mash-up, but it's a bit talky, making it overlong, but not without it's gritty charms. Both films arrives on Blu-ray from MCE framed in 1080p HD widescreen 2.35:1 looking a bit rough but acceptable, at least the first film. Damned Hot Day of Fire is rougher, assembled from a variety of sources as indicated by a text blurb that precedes it, quality of image and color timing shift throughout, and like the video, the audio of the Damned Hot Day of Fire is inferior but serviceable considering the bargain bin price. No extras, no slip, but the artwork on the wrap look great and there's a digital code for the film available from MCE's digital streaming service. 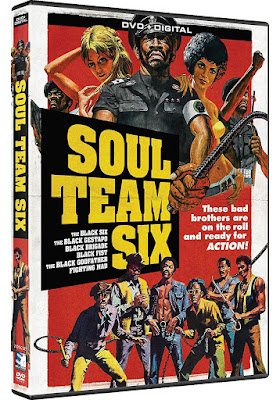 THE BLACK SIX(1973). Directed by Matt Cimber (The Witch Who Came from the Sea) this blaxploitation entry is the story of a group of African American ex-Nam vets who start up a motorcycle club, while touring they come up against some really awful racism, and then get news that one of the biker's little brother has been killed for dating a white girl back home. The six bikers return to avenge the young man's death, coming up against another biker gang comprised of white guys, making this z-grade slice of exploitation interesting in that it stars a grip of NFL players and is the are case of a biker biker film, and it has pretty funky theme song to go along with it.

THE BLACK GESTAPO (1975). In The Black Gestapo we have an African-American empowerment group in the Watts area of Los Angels, things start off positively with the group patrolling the neighborhood and making it a safer place to live for the black folk who have been terrorized by racist white mobs. However, when the sister of one of the group's leaders is raped by white men things turns sour, and the group turns tuns militant in the vein of the Gestapo, leading to some turmoil within the leadership. From director Lee Frost who directed Lovecamp 7 (1969) this slice of z-grade blaxploitation is entertaining and a bit ridiculous, but also strangely compelling in a weird way.

BLACK BRIGADE (1970). Produced by famous TV producer Aaron Spelling (90210) this 70's TV movie is set during World War II, with an African-American army company is given orders to destroy an important damn in Nazi occupied territory. The rag tag group are under the leadership of a prejudiced Captain, but they have to find a way to come together to accomplish the mission. As a TV film it's light on violence but has a good cast, notable starring Richard Pryor, Billy Dee Williams, Robert Hooks.

BLACK FIST (1974). Young Leroy Fisk (Richard Lawson) is making his living on the streets of Los Angeles as a street fighter and working for a local mob boss, but when he attempts to get out of the street fighting life the mob throws some retribution his way, and his brother and dies in a car bombing meant for him, and the expected revenge coming soon after. Not a great watch, but interesting in tat we have roles from Dabney Coleman (Cloak and Dagger) as a corrupt cop, Phillip Michael Thomas from Miami Vice as a pimp, and Edward James Olmos (Blade Runner) as a junkie.

THE BLACK GODFATHER (1974). Failing to deliver on the implied promise of the salacious title, we have the story of J.J., a low-level criminal who has worked his way up in the local crime scene, on the verge of becoming leader of his own syndicate, but the white Mafia's still got a hold on heroin trade in his neighborhood, resulting in a turf war. A flat and bland blaxploitation entry loaded with poor performances, lackluster in every way, the worst of the six on this set.

FIGHTING MAD (1978). Directed by Filipino exploitation legend Cirio H. Santiago Fighting made, maybe better known as Death Force, is the story of an American soldier on his way home from Vietnam is betrayed during a drug deal in China. Dumped overboard and left for dead he washes up on a remote island where he is rescued and healed by a pair of Japanese soldiers who've been holding out on the island since WWII, unaware that war is over! They nurse him back to health and train him in the way of the samurai allowing him to enact a run of bloody revenge on his tormentors once he returns to the U.S. Uneven and a bit sloppy the film has some pacing issues early on that threaten to stall the whole shebang, but once her gets back to the States and the revenge portion starts it's not a bad watch at all.

All six-film arrives on 2-disc DVD from MCE, three films on each disc, all presented in dupey looking full frame transfers heavily compressed and plagued by macroblocking. If you're looking for more pristine version of some of these I do know that Code red released Black Gestapo on Blu-ray and Vinegar Syndrome have released Fighting Mad under the alternate Death Force title on DVD, both widescreen and incalculably superior looking. If you're just looking to see these blaxploitation obscurities and don't give a whistle about the A/V this set can be picked up on the cheap, but the most attractive thing about it is montage from the original movie posters on the wrap. There's also a digital code for all six films through MCE's proprietary streaming service.

There you have it, five titles, thirteen films, all for a price that won't break the bank, a little something for everyone.