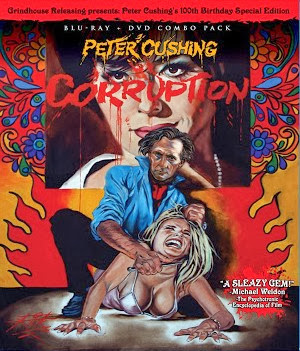 Grindhouse Releasing is proud to present the FIRST-EVER U.S. home video release of the wildest, sickest and sleaziest swinging-sixties British horror thriller -CORRUPTION. The legendary Peter Cushing stars as a surgeon driven to murder and madness as he attempts to restore the beauty of his hideously disfigured fashion model wife. Co-starring Sue Lloyd and Hammer Horror beauty Kate O'Mara (THE VAMPIRE LOVERS). This special edition contains shocking scenes of GORE and NUDITY previously deemed too strong for American audiences. 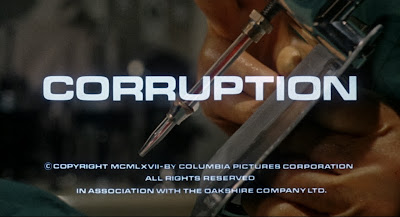 Peter Cushing stars as gifted surgeon Sir John Rowan in London with a knockout cover model for a girlfriend, the attractive Lynn (Sue Lloyd) whom is a few years his junior to say the least. At the top of the film the couple are attending a swinging 60's party, Lynn's completely in her element but Cushing's sorely out of place amidst the cacophonous sea of groovy fashions and swinging music. When a photographer encourages Lynn to pose for a picture John feels is a bit to risque he gets uncomfortable and tries to intervene causing an altercation with the photographer which sends a red-hot floodlight straight into Lynn's face, horribly scarring her.

When traditional surgeries fail to restore Lynn's former beauty Rowan, wracked with guilt, becomes obsessed and resorts to more unconventional methods, developing a procedure involving an experimental laser, skin grafts and the human pituitary gland. The laser he has access to however the other items he must procure illicitly from the cadavers at the morgue.  Sure enough the experimental procedure works and Lynn is as gorgeous as ever, only the effects are temporary and it's only a matter of days before the unsightly scarring returns.The procedure must be repeated and the doc is convinced he must harvest the raw materials from a fresher corpse leading him straight to the seedier to procure a prostitutes and down a maddening path of murder, and with each murder both Sir John and Lynn become a bit more unhinged.

Trust me, you have never seen Peter Cushing like this before or since, a murderously obsessed surgeon hell bent on healing his scarred wife, the sight of Cushing sitting wild-eyed atop a whore slicing her throat and running his bloodied hand over her bare breasts is a shocker, now that's some serious WOW factor right there! Sure, it's pretty sleazy stuff but Cushing is fantastic as the doc driven to madness by guilt and obsession following the accidental disfigurement of his lover's face, it's great stuff and while the deep psychological aspects of the story are not mined to their fullest potential we do get some decent sleaze and gore in it's place. 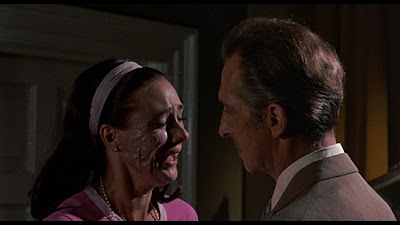 Sue Lloyd as Rowan's facially and mentally afflicted lover Lynn is not exactly a sympathetic character, even though Sir John's the one committing the heinous murders Lynn's the one manipulating the events to a certain degree. That she was not a more sympathetic, or just a more dynamic a character, was a serious flaw in the storytelling. Kate O'Mara from Hammer's The Vampire Lovers (1970) is a much more sympathetic character and she's pretty great in every scene, wanted to see more of her in the story.

The murders are quite brutal for the time period, decapitations, the lurid murder of a whore, a woman attacked on a train and a murder on the beach, it's great stuff. If sleaze and paint-red blood and gore are what you crave you need to watch the international version of the film included on the disc, it's nasty stuff and it still packs a visceral wallop some 45 years after the fact.

The shocker of an ending begins to unfold at a seaside villa where John and Lynn meet a comely young hitchhiker who would seem the perfect candidate to harvest the needed skin grafts and pituitary gland from, but it turns out she has some rather unsavory friends who make that a difficult proposition, and suddenly we have a Clockwork Orange-esque home invasion situation on our hands. It's definitely an ending you won't soon forget, for starters it's quite funny and a bit corny, too. Let's just say that in 1968 laser effects left a bit to be desired, but don't let it ruin the fun for ya, this one's a fun watch through and through thanks in no small part to Cushing's unhinged performance, some wonderfully lurid murders and copious amounts of sleaze. 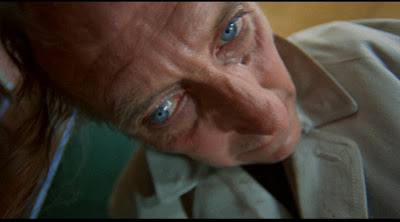 Blu-ray: Grindhouse Releasing's sophomore Blu-ray is quite a stunner, Corruption (1968) gets a AVC encoded 1080p transfer sourced from a near pristine print that's mostly blemish free, a few white speck and some very minor wear but overall this an amazing image with a nice layer of natural film grain. We get a fair amount of depth and some nice clarity to the image, those swinging 60's colors are vibrant and the darker scenes look quite nice, outstanding image quality.

Grindhouse Releasing never fail to amaze with the bonus content and Corruption (1968) is no different, we begin with two versions of the film, the original theatrical US/UK version and the sleazier International version with more gore and nudity... which to you think I watched? Having watched both the most visceral difference is the sleazy murder of the whore, what a nasty bit of business. 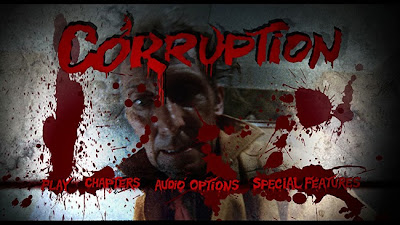 There's a great audio commentary from English Gothic: A Century of Horror Cinema author Jonathan Rigby and Peter Cushing biographer David Miller.  Both English gentleman who are scholarly but not boring, it's packed with a lifetime's worth of knowledge about the cast, the production and pretty much anything and everything you could ever wish to know about the film and then some, at ne point mentioning that Peter Cushing was not a fan of the film, he thought it was rather nasty, agreed, and that's why I love it!

There are also nearly 39 minutes worth of video interviews recorded in 2012 with actors Wendy Varnals, Billy Murray, and Jan Waters whom all have nothing but the kindest words to say about Cushing, unsurprisingly. There's also a vintage audio interview with Peter Cushing recorded in 1974, it's not specific to this film but he speaks about the horror and fantasy genre and of certain films which he felt were perhaps too extreme, notably mentioning William Friedkin's The Exorcist (1973).

Finishing up the disc extras, which are mirrored on the standard-def second disc, are about five minutes of trailers, TV spots, and radio spots plus three extensive galleries featuring promotional materials, posters, behind the-scenes pics and stills from the film.

Onto the packaging we get an over sized clear Blu-ray case, appropriately similar to the Criterion cases, plus a reversible sleeve of artwork by artists Rick Melton, one side featuring blood-covered titties slathered in grue while the other option is quite similar though less offensive. We also have a fold-out mini poster featuring the sleazier version of Melton's artwork and writing on the film by UK journalist Allan Bryce. I wish more labels would adopt the wider-spined Criterion style clear Blu-ray cases, it's an attractive package. This is a fantastic edition of a wildly entertaining slice of 60's sleaze, gotta hand it to Grindhouse for bringing this one to to home video for the first time ever, which is pretty astounding when you think about.

Verdict: Corruption (1968) was a blast from start to finish and it was an unexpected treat to see horror great Peter Cushing come unhinged like we've never seen before! Definitely check out this surgical proto-slasher, it's an entertaining watch with a demented shocker ending that you won't soon forget, it gets a first-rate edition from Grindhouse Releasing, one of the year's best titles, very highly recommended  4 Outta 5