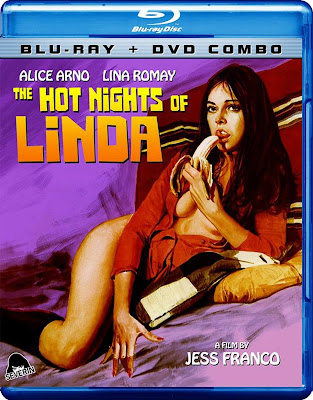 Euro-cult legend and smut master Jess Franco's The Hot Nights of Linda (1975) begins with a young woman named Maria-France (Alice Arno, Countess Perverse) in accepting a position as a live-in secretary for a wealthy weirdo named Mr. Steiner (Paul Muller, Nightmare Castle) who lives on a Greek island. Steiner lives in a picturesque mansion overlooking the blue waters of the Mediterranean where he resides with his paraplegic daughter Linda (Catherine Lafferière, Exorcism) and her sex-crazed cousin Olivia, played by Jess Franco muse and 70's sex-kitten Lina Romay (How to Seduce a Virgin). There's also a  mute manservant named Abdul (Pierre Taylou, Cecelia) who doesn't speak a word, just sorta grunts but somehow manages to get a steady stream of pussy just the same, it doesn't seem to be an issue for him.

When the ginger-muffed Marie-France arrives on the island her presence seems to amp of the strange and sleazy happenings on inside the home. This effects is particularly strong in the case of young Olivia who seeming rather bored with her wealthy lifestyle and winds up in just about every bed at the mansion including the sex-stud Abdul, newcomer Marie-France and even distracts herself carpet-munching her own invalid cousin - it's a strange encounter and is but rapey -but it's nothing compared to the potassium fueled penetration she performs on the "Hard Banana" version included on a bonus disc - WOW!

It's a Jess Franco production so 's probably redundant at this point to say that the sleaze is dripping off the screen scene after scene, we have copious amounts of voyeurism, sadism, incest, lesbianism, rape, and murder, truly a treasure trove of depravity. The way Olivia (Romay) sucks-off a banana is completely overwhelming - oh my! Arno as Marie-France is nice pint-sized slice of horniness - when she's rubs suntan lotion on Olivia's breasts its leads straight into the expected sun-drenched lesbian encounter you're hoping for, it doesn't disappoint.

Some of themes are pretty dark, when Mr. Steiner his nympho niece riding the manservant raw he shackles him in the basement dungeon and delivers a thrashing, it's also implied there's an incestuous secret between the father and his naughty niece, the father himself haunted by visions of his departed wife while Olivia has recurring nightmares of her uncle murdering hsi wife's lover, it's weird stuff and we get some nicely executed dream sequences, the film has a great balance of tension, eroticism and atmosphere.

Having just watched recently watched Franco's Countess Perverse (1973) and How to seduce a Virgin (1973) filmed during the same period it was easy to pick-up on not just a few familiar faces but familiar Franco themes that each film shares, we have the depravity of the wealthy, the amoral tendencies of the depraved, sadism mixed with eroticism and gorgeous locations, Franco had a great eye for exotic set-pieces, this a wonderfully shot film.

My list of grievances on this feature is pretty short, the dubbed-dialogue can be pretty awful, but no one ever sat down to watch a Jess Franco film for it's dialogue, that's for sure. Additionally, Pierre Taylou is awful as the manservant and there's a weird slapstick side story involving a detective and photographer spying on the family hoping to uncover a murder plot, it's goofy, but we do get a fun striptease, otherwise The Hot Nights of Linda (1975) is pant-swelling Euro-cult classic from Franco.

Blu-ray: Severin present Jess Franco's The Hot Nights of Linda (1975) with an AVC encode on Blu-ray and DVD, the 1080p widescreen image a bit rough but represents the most complete and attractive version of the film available to date. The very well worn print bares the alternate But Who Raped Linda? title card and is rampant with specs, debris and scratches, the most severe are a series of vertical scratches appearing at the 46:48 mark. The image suffers from softness, faded colors and the dark scenes are murky, it could be better but these are the best elements available.There's an English-dubbed DTS-HD Mono 1.0 audio track with no subtitlesoption, dialogue is never difficult to understand and the Greek-influenced score sounds quite nice.

Extras include Hot Nights, a 16-minute interview with Director Jess Franco who speaks about writing trhe role for Lina Romay who previously only appeared in supporting roles, the score, and working with Alice Arno, Paul Muller and the various incarnations of the film.

There's also a 12-minute interview with Jess Franco and Lina Romay whom discuss of the cast, script and the definitive edition of the film, it ends with Romay talking about her dislike of seeing herself on film.

Author Stephen Thrower appears to discuss this entry and this prolific period of Franco's career, describing Franco's creative process, the strange sound editing and dubbing process, going on to to discuss the various edits, alternate titles and versions of the film.

The first 2500 editions of this set include a limited edition bonus DVD featuring the super-rare French "Hard Banana" Version (79 Minutes) of the film with hardcore sex inserts filmed by Jess Franco himself, it's definitely something of a curiosity with extended masturbation and sex sequences. we have Lina Romay sucking cock, performing a hand-job and Arno eating Romay's hairy 70's pussy, it's pretty raw. Not to be missed is Pierre Tayou pulling out and spilling his seed across Romay's stomach, it's by far his best scene in the movie. Now, the quality of this version is pure shit, a cropped sub-VHS image in French with burned-in French subtitles. Check out the screen grab below for a comparison of the Blu-ray image versus the Hard Banana version, it's a shocker.

Verdict: The Hot Nights of Linda (1975) is a deeply satisfying slice of 70's voyeuristic sleaze with all the depravity and eroticism you've come to expect from Jess Franco and Severin have put out the most complete edition to date with some attractive extras. 3.5 Outta 5