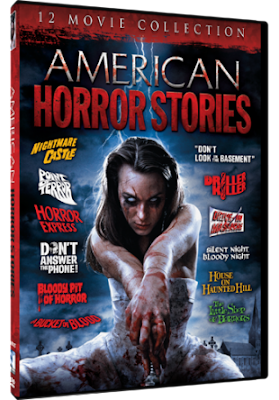 AMERICAN HORROR STORIES
12 Film Collection 3-Disc Set
Synopsis: Lock your doors and brace yourself for twelve terrifying tales of revenge, murder and madness! This three DVD collection spotlights the urban legends and horror stories that crept through the cracks of time to trigger our innermost fears and phobias. From mysterious mansions to sadistic scientists, this collection of American Horror Stories will test your terror tension!

DON'T ANSWER THE PHONE (1980)
A deeply disturbed photographer and Vietnam veteran, named Kirk Smith terrorizes Los Angeles by going around strangling lingerie-clad young women in their homes while taunting Lindsay Gale, a young psychologist, by calling her on a radio call-in show to describe his sexual hang-ups and misogynistic ways. Police detective, Lt. McCable, always seems to be two steps behind the psycho. Don't Answer the Phone stars James Westmoreland as Kirk the deranged serial killer and he's quite a character. Westmoreland brings a lot to the role,  my second favorite character is the wisecracking coroner who always says the most inappropriate things, good stuff. A fun electronic score drones away while our giggling pervert goes about his business, we get some nudity but the winner here is the nut job killer, a real wacko and a slice of 70's not-quite-schlock cinema, but it ain't great either, just a fun watch, I love it when the killer sobs uncontrollably and starts freaking out, it's not great but it's a decent bit of junkfood on a Friday night.
POINT OF TERROR (1971)
Tony Trelos (Peter Carpenter, BLOOD MANIA) is a nightclub singer at the Lobster House were he performs two shows a night to women in front of a tin foil backdrop as he swivels those hips in his best Tom Jones impersonation. He meets the Andrea Hillard (Dyanne Thorne, ILSA: SHE WOLF OF THE SS) the wife of the CEO of National Records. They carry on a torrid affair while she promises him a contract. Tony is having dreams of murder and he wakes to find they may not be nightmares at all. Wow, this seems like a real vanity project for Carpenter who spends the film singing crap 70's schlock and prancing around 1/2 naked for 3/4 of the film. There's some nice nudity from the very attractive Thorne but otherwise this a nightmarish drama with little atmosphere and with a few weak murders thrown in to spice it up, skip it. .
HOUSE ON HAUNTED HILL (1950)
I love William Castle's gimmicky haunted house extravaganza starring the immortal Vincent Price as eccentric millionaire Frederick Loren who invites 5 guests to stay the night at his mysterious mansion located on Haunted Hill, if they survive the night will be awarded $10,000. So much fun

A BUCKET OF BLOOD (1959)
Dick Miller (GREMMLINS) stars in this biting black comedy from the master of schlock cinema Roger Corman, Miller as Walter, an awkward schmo whom after accidentally stabbing his landlady's cat to death attempts to covers it up by concealing it with modeling clay. when the strange "sculpture" comes to the attention of some beatnik art types its revered as a great piece of art and pretty soon Walter's a rising star in the art community while the body count climbs.

HORROR EXPRESS (1972)
HORROR EXPRESS aka PANIC ON THE TRANS-SIBERIAN EXPRESS stars the dynamic team-up of horror royalty Christopher Lee (THE HOUSE THAT DRIPPED BLOOD) and Peter Cushing (ASYLUM) in a rare instance of on-screen kinship as opposed to their usual Dracula vs. Van Helsing dichotomy. The film also features a memorable appearance from a scenery chewing Telly Savalas (LISA AND THE DEVIL) and Albert de Mendoza (A LIZARD IN A WOMAN'S SKIN) as a Rasputin-like Monk. This classic 70's thriller-chiller features a prehistoric creature that turns it's victims into eye-bleeding zombies on the Trans-Siberian Express.The film certainly takes inspiration from John Campbell's story WHO GOES THERE (the inspiration for both Howard Hawks THE THING FROM ANOTHER WORLD and John Carpenter's THE THING) the film masterfully isolates a core group of characters on a train speeding through a desolate landscape. As the mystery deepens the paranoia is ramped up to the breaking point, it's thick with atmosphere and this early 70's chiller is a grisly and macabre slice of sci-fi horror with a pretty steep body count for the day with no less than 15 by my count. At only and hour and a half the film's well-plotted structure keeps the momentum moving forward with thrilling twists and turns, there's no point at which the story becomes stagnant, it's a finely paced film.
THE LITTLE SHOP OF HORRORS (1960)
Seymour works in a skid row florist shop and is in love with his beautiful co-worker Audrey. He creates a new plant that not only talks but cannot survive without human flesh and blood. The print here is not the greatest but for the price of the set I am not complaining. Legend Films have a nice restored edition on DVD with the original black and white plus the colorized version and a Mike Nelson (MST3K) commentary. Gotta love William Castle, he's definitely the Alfred Hitchcock of Schlock, and that's high praise.
NIGHTMARE CASTLE (1965)
A fantastic Italian Gothic thriller starring Euro-vamp Barbara Steele (BLACK SUNDAY) in a dual-role, shot in black and white this chiller is a tale of obsession, madness and depravity of a cheating wife who is tortured to death along with her lover by her sadistic scientist husband when she caught cheating, fun stuff. In attempt to get his hands on her money he marries her the heir to her fortune, her sister, who is a bit unstable having just left the asylum. He and the maid work hard to drive her over the edge and to suicide, she suffers nightmares and visions and their diabolical plan seems to be effective, but it seems that the spirits of the murdered lovers have their own vengeance in mind. Barbara Steele is mesmerizing in this surreal slice of Gothic horror, if it strikes a chord with you I strongly recommend Severin Films gorgeous restored DVD edition.
SILENT NIGHT, BLOODY NIGHT (1974)
When a man inherits a country mansion that was the former site of an asylum the bodies start piling up, it stars Mary Waronov (HOUSE OF THE DEVIL) and the print is just awful, which makes it difficult to enjoy what's happening onscreen, certainly this is a case of if we had a decent transfer it would be so much more enjoyable but as it stands if you have the patience to sit through it there's a really decent slasher at the asylum story here with some decent atmosphere and gory kills, it's a bit of a slow-burn but the creepy tension and decent payoff kept me hanging in there.
BLOODY PIT OF HORROR (1965)
A photographer and his sexy models go to an old, Gothic castle to shoot some sexy covers for horror novels. Unbeknownst to them, the castle is inhabited by an actor/lunatic who believes himself to be the reincarnated spirit of a 17th-century executioner. He calls himself the Crimson Executioner. It's not an original idea my any stretch of the imagination, but it'll do. This film is a bit odd but a lot of fun. Some great torture scenes with lots of gimmicks and gorgeous ladies in minimal clothing, what's not to love?.
THE DRILLER KILLER (1979)
Abel Ferrara stars in this low-budget Video Nasty about a troubled artist driven to commit a murderous drilling-spree by his squalid living conditions, poverty, and the incessant cacophony of the noise rock band living downstairs. Watching this I was reminded of the film COMBAT SHOCK (1984) which came about five years later, both films are disturbing and compelling case studies of a troubled psyche pushed to far, great lo-fi NYC cinema.
DON'T LOOK IN THE BASEMENT (1973)
A decent low budget drive-in asylum shocker from cult director S.F. Browning (DON'T OPEN THE DOOR) with some fun grisly gore, it's one of those inmates are running the asylum pics and starts off strong with a bloody ax murder and then a pretty young nurse named Charlotte Beale (Rosie Holotik) shows up for her first day at the asylum and of course things pretty strange and only get weirder from their, we get a nice dose of 70's sleaze with this one, fun stuff.
DRIVE-IN MASSACRE (1974)
Love this title but O Lord is this an awful film, a sword-wielding psychopath is terrorizing the drive and two inept detectives are on the case, they even go undercover with one of 'em dressed in drag which sacks of THE TOWN THAT DREADED SUNDOWN but nowhere near as good. Points for the drive-in gimmick which ties into the finale but it's a dud, skip it.

Verdict: Just in time for Halloween Mill Creek Entertainment always come through with a few solid budget collections on the cheap, I've seen this one on Amazon.com and Walmart for just a few bucks, sure the transfers are usually sub-VHS quality but always a few dusty horror gems nestled away among the schlock, this set has quite a few fun entries including the Gothic chiller NIGHTMARE CASTLE (1965) with Barbara Steel and the HORROR EXPRESS (1972) starring Hammer fright icons Peter Cushing and Christopher Lee, for just a few bucks you can't go wrong. 3 Outta 5
Posted by Ken at 6:51 PM