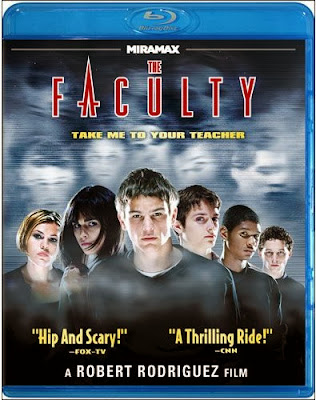 
If you're a mind controlling race of parasitic aliens how would you go about invading the planet? Obviously you'd start at a Mid-West high school, right? Maybe not, but director Robert Rodriguez's trashy invasion film cleverly riffs on the sci-fi classic Invasion of the Body Snatchers (1956) and is way more fun than it has any right to be, in retrospect it's a highlight of 90's horror that's ripe for re discovery.

The fun script was doctored by Scream (1996) writer Kevin Williamson and the cast is pretty talented, we have a lot of young talent onscreen, beginning with our main protagonist Casey, a nerdy school paper photographer played by Elijah Wood (the Maniac remake) who starts to suspect the staff at Herrington High just might be aliens after he discoverers an alien parasite on the football field. His theory is confirmed when the faculty and staff start turning the student body into aliens! On the run from the aliens Casey must align himself with an unlikely array of high school archetypes with a twist. You have the super-smart drug dealer (Josh Hartnet, The Virgin suicides), the wanna-be intellect jock (Shawn Hatosy, Alpha Dog), the shy Southern girl (Laura Harris, Dead Like Me), the head cheerleader who moonlights as the school newspaper editor (Jordanna Brewster, Fast Five), and the outcast lesbian (Clea DuVall, HBO's Carnivale). It's an entertaining bunch to be sure, and expectantly they turn on one another as personalities clash and paranoia builds.

Onto the teaching staff we have the smoking hot principal played by Bebe Neuwirth who played Frasier Crane's wife on the TV sitcom Cheers, I had such a hard-on for this woman as a young boy and she's still total turn-on here, am I alone in thinking this? Speaking of total foxes we have Famke Janssen (Goldeneye) as a mousy language arts teacher who transforms into a total vamp when infected with the alien parasite. Plus Salma Hayek (Frida) plays the school nurse, when isn't she gorgeous? Never, that's when. Okay, now that we have the cuties outta the way we can talk about Piper Laurie (Carrie) who is perfectly creepy here as one of the first teachers to come under the spell of the alien parasites  alongside Robert Patrick (The Black Waters of Echo Pond) as the intense small town football coach. There are even appearances from The Daily Show's Jon Stewart who appears as Prof. Furlong and comedian Lewis Black is in there alongside uber-geek Harry Knowles. Just the cast alone is pretty great even if we don't get a lot of depth to anyone, it's pretty shallow and that's alright. This is a trashy slice of high school paranoia  with some dumb action and decent special effects with a rocking 90's soundtrack - what's not to enjoy?

Blu-ray: Echo Bridge Home Entertainment bring The Faculty (1999) to Blu-ray with a AVC encode and it looks pretty sharp in 1080p widescreen (1.78:1). Nicely saturated colors, decent black levels and a pleasing amount of depth and clarity, the film's natural grain structure is intact. There are three English audio options including Dolby Digital 2.0 and 5.1 plus a robust DTS-HD Master Audio 5.1 mix that makes good use of the surrounds, dialogue is crisp and the score and the fun 90's alternative rock soundtrack sounds quite nice. No subtitles and no special features sadly, a commentary, featurettes or deleted scenes would have been appreciated.

Verdict: A pretty trashy 90's sci-fi entry with just the right amount of cheese, aliens are invading a mid-western high school, it's just as silly as it sounds but it's an entertaining romp with a great cast, a perfectly trashy popcorn watch. The Faculty (1999) gets a definite recommend and it's pretty cheap on Blu-ray, I say add this one to your collection. 3 Outta 5