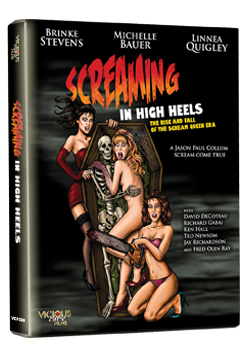 Synopsis: Three girls living in Los Angeles, CA, in the 1980s found cult fame when they "accidentally" transitioned from models to B-movie actresses, coinciding with the major direct-to-video horror film boom of the era. Known as "The Terrifying Trio," Linnea Quigley (The Return of the Living Dead), Brinke Stevens (The Slumber Party Massacre) and Michelle Bauer (The Tomb), headlined upwards of ten films per year, fending off men in rubber monster suits, pubescent teenage boys, and deadly showers. They joined together in campy cult films like Sorority Babes in the Slimeball Bowl-O-Rama (1988) and Nightmare Sisters (1987). They traveled all over the world, met President Reagan, and built mini-empires of trading cards, comic books, and model kits. Then it all came crashing down. This documentary remembers these actresses - and their most common collaborators - on how smart they were to play stupid.

The Film: What we have here is a fun documentary detailing the rise of three 80's scream queens beginning with a brief history lesson telling of the rise of the baby-boomer drive-in theater market and how it was a major outlet for indie films of the day including the seminal films of the Godfather of Gore - Herschel Gordon Lewis (Blood Feast). It's also the tale of  how the home video market more or less killed the drive-in culture when all these b-movies became readily available to anyone with a VHS player. This was a revelation at a time when only the most die-hard collector's could actually "own" a movie but with the advent of VHS cassettes and players you could watch it repeatedly - or at least until you wore the damn cassette out. I loved renting VHS in the early to mid-80's though I was content to rent and never once even thought of owning a video cassette - after viewing many a worn VHS it just seemed not a wise investment of my hard-earned teen dollars - until like so many others Tim Burton's Batman (1989) hit the shelves and even still then the idea of collecting films didn't really seem like a wise investment until the advent of DVD - after that it was game on.

The film centers of the big three of 80's horror and what a lovely collection of ladies indeed. We have the brainy marine biologist turned scream queen Brink Stevens who I was most familiar with from Slumber Party Massacre (1982), car-wash employee turned Penthouse centerfold Michelle Bauer of The Tomb (1986) and a painfully shy teen and daughter of a college president turned horror royalty with turns in the exploitation rape-revenger Savage Streets (1985) and my personal favorite - "Trash" from Dan O'Bannon's iconic 80's punk-rocker zombie masterpiece The Return of the Living Dead (1985)

We get the ladies themselves reflecting on their entries into the world of b-movie, their careers and legacies and the the plus some talking head interview with directors Ted Newson, David DeCoteau, Jason Paul Collin writer Ken Hall among others.

All in all it wasn't the most electrifying documentary ever but it's a decent watch for sure with a ton of fun clips from some truly obscure 80's and straight-to-video 90's b-movie titles. Honestly, aside from Linnea Quigley I didn't recognize either Stevens or Bauer by name but their faces (among other physical attributes) were readily familiar upon viewing clips from the films. This lack of recognition stemming from the fact that I've always been drawn to films by director's and not so much so the actors, it's not a dig it's just the way my mind works - the exception being Linnea who was burned into my mind from a young age following a titillating view of Return of the Living Dead on VHS from way back.

The screener sent my way didn't include any of the bonus content but the resale version of the film features the following:

- Footage from the Flashback Weekend of Horror Q+A Sessionmart they were to play stupid.

Verdict: A fun scream-queen documentary but while not on par with Not Quite Hollwood, The Shark is Still Working or even Machete Maidens Unleashed in my opinion but a fun romp and definitely one featuring quite a few grinders from the 90's I've never seen, so at the very least there's some great clips of a few 80's favorites and a bunch more direct-to-video monstrosities awaiting a future viewing. Fun stuff, not essential but a decent Friday night watcher. 2.5 Outta 5