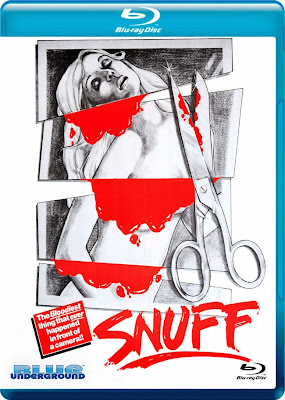 Legend has it that Snuff (1976) is the film that started the entire urban legend around the existence of the snuff films, watching it now it's pretty hard to believe that people were up in arms over it but apparently it's true. In the early 70's filmmakers Michael and Roberta Findlay (Shriek of the Mutilated) went to South America and made a cheapie biker-cult exploitation film titled The Slaughter. By every account the film was nearly unwatchable, unable to find a distributor they sold it to NYC producer Allan Shackleton who let it collect dust on a shelf for a few years until he thought to finance a new five-minute ending, what resulted is a notorious piece of trash cinema that when combined with a shrewd marketing campaign went on to stir-up quite a controversy and make pocketfuls of cash for the producer.

At it's heart we have a film about a Charles Manson-esque cult leader named Satan (Enrique Larratelli) who controls a squad of murdering druggie biker-chics who are out to murder a young Hollywood starlet named Terry London  (Mirtha Massa) who is in South America to work on a film with smut-producer Max Marsh (Aldo Mayo).

Most of the stuff with the actress, a love interest and her producer is pure shit, it's padded out with painfully dull sequences like a trip to the carnival festival, just painful and it seems to go on forever. Now, the drugged-out bikers babes are where the real fun's at, trampy bad girls doing nasty things and committing crimes. oh yeah.

A highlight for me were the biker chics murdering the proprietor of a grocery store, shooting his entire family down with each member dying a painful slow-motion death, it's completely overwrought and wacky. We get  a decent amount of death and sleaze onscreen as these bad girls torture, fuck, stab a slash there way towards the actress. The violence is certainly schlocky with a z-grade drive-in quality but it's a welcome distraction coming off of long stretches yawn-inducing boredom. If you love comically awful English dubbed dialogue you are in for quite a treat, there's a lot of schlock-value to enjoy, this is awful stuff but it's not without a certain trash cinema appeal.

Blu-ray: Blue Underground present Snuff uncut with an AVC encode in 1080p widescreen (1.66:1) with plenty of print damage. Come into this expecting some specs, scratches and serious grit, which seems appropriate enough given the lurid history of the film. The English DTS-HD Master Audio Mono sounds pretty decent, some minor hiss and distortion but like the image, the roughness just seems appropriate.

Extras begin with an interview from filmmaker Carter Stevens who speaks about the films origins, it's notoriety and shooting the new ending and it's shitty effects work, he also tells an anecdote about the actress in the scene who apparently tired started to panic fearing the filmmakers were making an actual snuff movie.

Director Nicolas Winding Refn who directed the film Drive offers up an intro what he calls the Godard version of horror and a seven minute interview in which he offers an appreciation for what he refers to as an experimental biker-chic flick, he's very kind to the film.

There's also a neat five minute piece with retired FBI agent Bill Kelly whom recalls investigating rumors of actual snuff films. Extras are finished up with two galleries and the US and German trailer plus an essay on the film by Alexandra Heller-Nicholas. Blue Underground present the disc in a red Criterion-style keep case with a reversible sleeve of artwork.

Verdict: Snuff (1976) despite it exploitation classic status is a pretty shit watch, there's just no arguing that simple fact. It's a strange and gritty slice of trash cinema, the mythology surrounding it definitely outweighs any cinematic merit though. Just to know that it inspired one of the most enduring urban legends of our time at least warrants a single viewing just to say you've seen it once - and that might be quite enough. 2.5 Outta 5