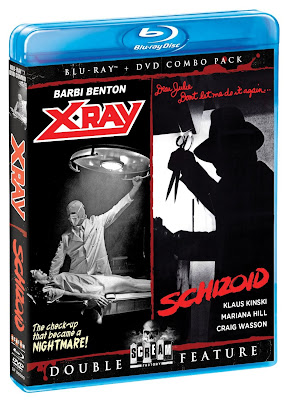 X-Ray (1983) aka Hospital Massacre is a weird and occasionally effective slasher film directed by Boaz Davidson who also directed the teen coming-of-age comedy The Last American Virgin (1982), which might explain some of the inherent corniness we're subjected to here. We open in 1961 and a young girl named Susan and her brother are home alone when there's a knock at the door. A young boy leaves a Valentine card at the doorstep and runs away, the young girl reads the card and laughs about as the boy can be seen scowling creepily through the window. The next scene features Susan holding a knife threateningly but she's just cutting a slice of cake, when she returns to the next room her brother is dead, somehow hung from a coat rack and that creepy kid can be seen laughing in the window. What a weird set-up scene, bonus points for featuring two of the killer kids from Blood Birthday (1981).

Now it's nineteen years later and Susan, played by Playboy Playmate Barbi Benton, is at the hospital to receive medical test results. What should be a routine visit turns into an extended medical nightmare when her doctor comes up missing. Susan's unable to get a straight answer about what might be wrong with her, but the docs insist that she must stay the night for observation, pretty much against her will.

As the night rolls along the bodies start piling up, it's pretty obvious that someone has been tampering with her medical records and doesn't want her to leave the hospital, but why? There's no shortage of oddball suspects, could it be her overly angry ex, the leering janitor, the strange patient with a sloppy cheeseburger, the pest control guys in gas masks, a weird trio of elderly woman, or maybe that guy in the hospital scrubs slashing people to death and hiding their bodies on the ninth floor, which is being fumigated with a toxic fog but for some reason everyone is walking around up there!

This is a strange one indeed and it doesn't make much sense, but at the end of the day but it's a goofy hospital-set slasher with some odd atmosphere. There are some effectively creepy moments but they're awkwardly punctuated by corny humor, that the tone is so uneven brings it down. Happily the deaths are decent, we have a janitor who gets face-dipped in a vat of acid, a nurse strangling, a decapitation, multiple stabbings and someone is set on fire, not that original but some decent slasher 101 stuff. Honestly a chore to watch at times but with a roomful of drunken friends you've got yourself a fun time.

Schizoid (1980) stars uber-creeper Klaus Kinski (Crawlspace) as a psychiatrist who's therapy group is being stalked by a scissor-wielding serial killer. One of the group's members is a local advice columnist who works with the police to help capture the killer. This one has a nice Giallo flavor to it, the killer wears black-gloves, a trench coat and an over sized hat, the weapon of choice is a large pair of scissors. We start off strong with the killer stalking one of the therapy group girls from her session, she's on a bike and the killer follows in a car, eventually bumping her from her bike. She runs into an abandoned house where our killer catches-up with her, gutting her with scissors.

Kinski is pretty great as the lusty psychiatrist, he's sleeping with pretty much everyone in his therapy group aside from the one guy, a weirdo maintenance man played by a pre-Back to the Future (1986) Christopher Lloyd, one scene has him banging a stripper up against a water heater, nice and sleazy. Kinski is just one of the guys that oozes creep-factor so of course you suspect he might be the murder  it doesn't help that he peeps his teen daughter in the shower either, told you he was creepy. The cast also features actor Craig Wasson of Brian De Palm's Body Double (1984) as the broken-hearts columnist's ex, like we saw with X-Ray everyone seems to be a suspect but the script and direction are pretty weak.

After a pretty fun start with the biker kill the film chugs away at a pretty decent pace but it does start to drag, worse, the kills are pretty tame and for a z-grade slasher that's just unacceptable, the reveal at the ends wasn't exactly a surprise either.

Blu-ray: Shout Factory imprint Scream Factory offer up both slasher features on a 2-disc DVD/BD. X-Ray (1983) looks pretty decent in 1080p but it's not exactly eye-popping. Colors are decent but the contrast is poor which doesn't do the darker scenes an favors. Schizoid (1980) fares better with a sharper image, more saturated colors and decent contrast.

Each title is equipped with DTS-HD Master Audio Mono which offers decent dynamic range if not a lot of depth. Dialogue is always clear and the effects and score are well-balanced, the odd Omen-esque score for X-Ray by composer Arlon Ober sounds quite nice if misplaced.

Extras on X-ray (1983) are limited to an Interview with director Boaz Davidson (13:01) whom speaks about his early career in Israel and working with Golan and Globus. Schizoid (1980) features a Theatrical Trailer (1:39) and an Interview with actress Donna Wilkes (10:41) speaking about her career post-Jaws 2 (1978) and actually stabbing poor Craig Wasson during a scene in this film.

Verdict: No one will ever mistake these 80's whodunits as particularly good watches but I do have a soft spot for slashers and I love that Scream Factory gave these a decent Blu-ray release. Quality of the films aside we slasher fans are a generous and forgiving bunch, if you're anything like me you're gonna want this budget-minded double feature on your Blu-ray shelf. I can definitely predict a future group viewing of both with mass quantities of beer and a lot of laughs, they're not great but they have some intrinsic slasher value. 2.5 Outta 5 .