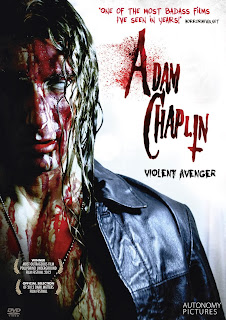 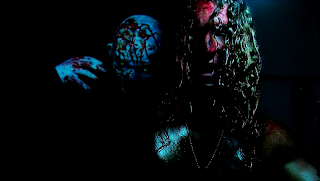 Set in the fictional country of Heaven Valley, Adam is investigating his wife s suspicious death and discovers the involvement of the local mafia boss, Denny Richards. Unable to trust the police, who are controlled by Denny, a vengeful Adam summons up a demon, who offers him superhuman strength and dark powers. The demon will guide Adam to his wife s murderer only if he follows all the demon s wishes. The war has been unleashed against the police and it will be the bloodiest, goriest battle for anyone who tries to stop ADAM CHAPLIN: VIOLENT AVENGER!

Italian Writer-Director-Actor Emanuele De Santi has created a hyper-violent slab of splatter with his entry Adam Chaplin: Violent Avenger. Italian horror has seemed pretty non-existence since the late '80s, the last notable Italian export on my radar was Michele Soavi's macabre black comedy Cemetery Man (1994),  now it seems we have a modern splatter classic putting Italy back on the map. The plot as in the preceding paragraph is quite simplistic, Adam Chaplin's wife dies mysteriously and he summons a demon to get revenge on a weirdo mafia boss, followed by an endless parade of meat-grinder carnage. 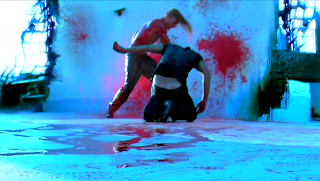 With a super low budget director Emanuele De Santi manages to pack in wall-to-wall practical gore effects enhanced by computer animation, we get a dizzying array of splatter and onscreen nastiness, with a minimum of character development and world building. There seems to be several techniques at work here, the gory practical effects, plenty of bloody CGI and even some miniatures, most of it works withing the parameters of the super stylized design of the film but there are a few fall a bit short, but fear not, overall this is a pretty amazing gore film.

At times it reminded me of Jason Eisener's Hobo with a Shotgun (2011) with an infusion of anime styled violence, we have non-stop splatter and a wild array of super-villainous baddies that our violent avenger must plows through. There are hordes of crooked cops, cronies and losers. each are mangled and shredded in quick succession, which is not to say that there aren't moments when the story threatens to slow things down, it happens. Along the way we get a back story for our anti-hero, the arch villain has an appropriately fucked-up origin and there's a villainous counterpart to the protagonist. Now the acting, it's not great, but it's not awful either, that it's in Italian and dialogue is kept to a minimum works in it's favor, director Santi himself plays the titular pumped-up anti-hero and he does the job just fine, everyone else is pretty much meat for the grinder. The film has such a fun sense of kinetic energy, a lot of energy in it's execution, great stuff. It's low budget, it's super violent and the heart and passion the creative team put into it pours of the screen in torrents of blood. I would dare say that Adam Chaplin: Violent Avenger (2011) is a new splatter-classic and a ton of fun. 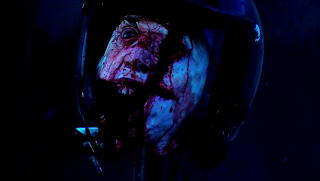 Verdict: Adam Chaplin: Violent Avenger (2011) is an ultra-violent, hyper-stylized gore-classic drenched in splatter, this would make a great party movie with a roomful of drunken friends, immensely entertaining, this Italian lo-fi gore import gets a recommend. 3 Outta 5