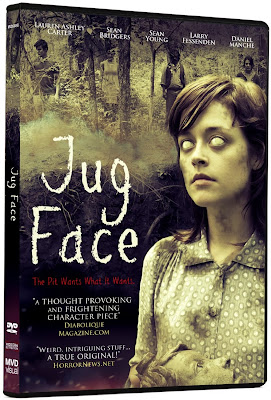 Tagline: The pit wants what it wants.

Jug Face (2013) is a indie Southern Gothic horror from director Chad Crawford Kinkle and while his name may not familiar the talent surrounding the film will be starting with executive producer Lucky McKee (MAY), make-up effects by Robert Kurtzman (ARMY OF DARKNESS) and a cast that includes indie stalwart Larry Fessenden (I SELL THE EAD), Sean Young (BLADERUNNER), and Lauren Ashley Carter and Sean Bridges from McKee's THE WOMAN (2011), right away I knew this might be something to check out.

We have a small clan of rural folk who worship a Lovecraftian creature that lives in a small water-filled wound in the ground referred to as The Pit. Apparently these people have worshiped the Pit from the time of the very first settlers, we have a great animated credit sequence that nicely sums it up for us rather nicely. Occasionally The Pit demands a human sacrifice in exchange for the health of the community. Ada (Lauren Ashley Carter) is the daughter of Susten (Larry Fesseden) the moonshine-producing leader of the rural community, Ada's been chosen to be joined with the son of another family, but Ada's mother Lorris (Sean Young) fears that her daughter will shame them by having pre-joined sex and performs a bizarre daily virginity inspection on her daughter, it's pure weirdness. Sure enough Ada's up to no good but it's even worse than what mama could possibly imagine, oh those backwoods folk!

It's pretty neat the way the sacrifice is chosen, a potter named Dawai (Sean Bridgers) will become possessed by the spirit of the pit and casts a jug face, a moonshine ceramic jug with the face of a member of the community on it who must then be sacrificed as a blood offering, but when Ada discovers a jug with her likeness she buries it in the woods. Ada's action angers the creature of the pit which forth to wreak vengeance on the community, Ada's tormented by guilt, her secrets results in several more deaths and the creature assesses her inflicting upon her the vision of each death.

A very decent folksy horror watch, this Southern  Gothic tale is quite gripping, no one character is pure, it's hard to agree with a lot of what's happening here, the beliefs and on-goings are just wrong on so many levels, our anti-heroine is sympathetic but she's a bit unsavory, every character is very flawed but it's a testament to the cast that we can get inside these characters to a degree, the only innocent is the dim-witted potter Dawai, he's really the heart of the film, and Bridgers is fantastic. Larry Fessenden as the leader of the community brings some nice soft touches to a grizzled character, and Sean Young as the cruel mother was almost unrecognizable to me, it's obviously been a longtime since BLADERUNNER, but she's terrifically nasty in the role, good stuff.

We see a lot of backwoods horror on the low-budget scene but rarely do we see an entry with such a superb cast that executed so deftly, there's some real atmosphere and creepiness to this one, it's a bit of a slow-burn and the gore is a bit subdued but it won me over, this gets a recommend, even if the finale didn't live up to the build-up.

DVD: Jug Face (2013) gets a nice 16:9 widescreen (2.35:1) DVD presentation from MVD Visual with English Dolby Digital 2.0 audio and optional English subtitles. There's also a decent selection of bonus content including the director's short film ORGAN GRINDER, plus a making-of featurette with cast and crew interviews and footage of the mostly unused creature suit, plus a trailer.
Special Features:
- Trailer (2:06)
- The Story of Jug Face (28:27)

Verdict: With a title like JUG FACE I was not expecting much from this one but it turned out to be a very pleasant surprise.  An attractive, well-crafted indie horror from a first time director with a fantastic cast and a compelling story. It just sorta sneaks up on you with it's eerie folk horror elements, throw in a little some incest and a vengeful Lovecraftian pit creature that's out for blood and what's not to love? Definitely looking forward to more films from Chad Crawford Kinkle, this is weird and wonderful stuff, 3.5 Outta 5