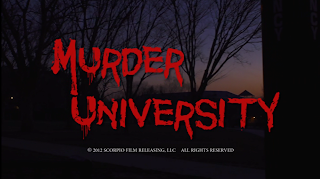 Director Richard Griffin yet to disappoint  every film so far has been a blast, spanning the spectrum of genre films. We have the Lovecraftian horror Beyond the Dunwich Horror (2008), the nasty nunploitation Nun of That (2009), the 50's science fiction weirdness of Atomic Brain Invasion (2010) and kinky retro-70's possession shocker The Disco Exorcist (2011). every movie is peppered with cleverness and snappy dialogue, a  sweet abundance of nudity and a pleasing amount of gore. They're low budget but stylish with great lighting and production values, making them very easy on the eyes, not every low-budget horror flick can say that.

This time out Griffin sets his sights on the teen-slashers of the 1980's, a fun pre-credit sequence tells us it's 1983, two horny couples are exploring an abandoned home with a horrific past. They split up with the idea of engaging in some sexual activity when one of  'em hears a sound, a dopey guy with his erection runs off to see what's up and before you know it heads are being lopped off with an ax. We're off to a great start,  the blood is flowing and there's even a fun early twist. Cue an awesome retro-80's song and this head-rolling slasher is underway. 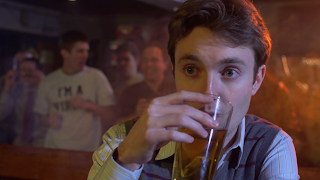 Our main guy is an awkward freshman named Josh at Greensboro University, which is perhaps the most unsafe college campus ever. The place has been plagued by a series of ax murders for twenty years, the devil-masked murderer has yet been apprehended. It's not exactly a secret that there's an ax-wielding killer on the loose and it's only a matter of time until Josh is attacked, but he survives. In the aftermath he joins forces with a veteran police officer and his cute daughter, that's pretty much the short of the story.

Typical of a Griffin production we have no shortage of fun side characters, very odd teachers, hippies, a pervy roommate, a violent wasteoid, the hard-nosed detective and his cute daughter, none of which are explored very deeply but we do get a decent feel for Josh. In the absence of deeply written characters we some great comic dialogue.

Griffin and screenwriter Lenny Schwartz have a real gift for comedy and the cast deliver every line with a perfect deadpan, loved it. The music s great, a burping 80's synth score with shrieking stingers and droning atmosphere. There's also a cool 50's flashback scene featuring a trio performing a ditty about the pinko commie threat, sweet, followed by some sex, gore and humor in short order. Two horny teens are sexing each other up when the young man's throat slit, when the blood spurts onto her back she tersely asks "did you come already!?!" before noticing her lover is dead, fun stuff. 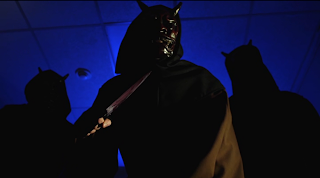 The gore is plentiful with a lot of practical effects aided by some digital enhancements, numerous slit throats and  decapitations, the weapon of choice is an ax and while I didn't completely love the devil-masked design of the killers I did love the massive amounts of blood.

Richard Griffin's movies aesthetically are always pleasing, if Lamberto Bava (Demons) had shot the The Dorm That Dripped Blood (1981) it might have looked something  like what cinematographer Jill Poisson does here. Negatives, the ending didn't quite do it for me but there's no denying what an entertaining retro-slasher this is, easily recommended,

Verdict: Murder University (2012), is a fun retro-80's gore and sex slasher with just the right amount of humor. Richard Griffin is a definitely a director to watch out for, if you see his name on a film it's pretty much assured to be a b-movie keeper, kudos to Wild Eye Releasing for picking this one up.
3.5 Outta 5