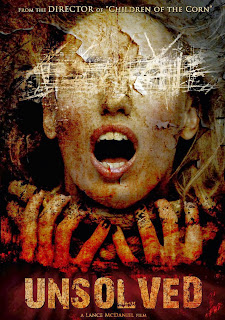 Amanda (Lezette Boutin) is among a group of law students assigned to investigate cold cases by her college professor, the case she chooses is a murder which took place fifteen years earlier on her own campus, a young woman was murdered outside her dorm, the killer was never captured. Upon sleuthing the murder she uncovers a few unsavory details, some of which are hitting very close to home for the young woman with a troubled past, even putting herself and friends in harm's way to get to the bottom of the case.

Not so much a slasher as a thriller with some slasher elements I found Unsolved (2008) to be an entertaining enough micro-budget feature with some decent twists and turns.  While no one here is walking away with the Oscar for a low-budget feature it's fairly strong cast with a dynamic range of characters. The body count is not particularly high but the kills are executed nicely even if the blood isn't pouring off screen. Visually it's well shot with some decent camera movement but the cinematography definitely shows it's micro-budget constraints, contrast is poor and there's no depth to the image, but f you can overlook a handful of cinematic shortcomings this is a decent whodunit with a decent climax which I didn't see coming, very nicely done. Honestly I don't see it having broad appeal but if you find yourself scouring the $1 bin and come across it you could do much worse.  2.5 Outta 5