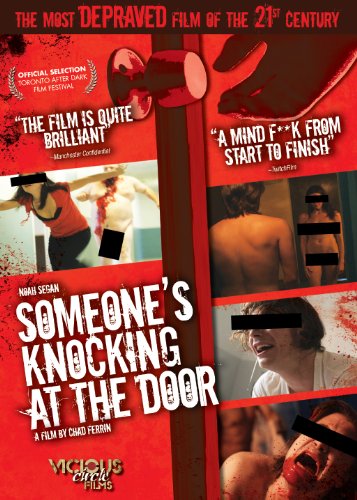 PLOT: A gruesome and graphic horror tale about a group of unsuspecting friends being terrorized by a pair of psycho killers. In a nod to those classic '70's indie splatter films, the story follows six college classmates on a drug - and sex filled week-end. When one of them is brutally murdered, it soon becomes clear that one by one they are being stalked by the unknown killers. Someone's Knocking at the Door is Russ Meyer meets Dario Argento, in which youthful, voluptuous bodies find their doom in a blood-splattered orgy of murder and sex. A unique and original grindhouse thriller that will keep you guessing right up until its unpredictable and shocking ending. (from BreakingGlassPictures.com)FILM:

FILM: Director Chad Ferrin has made a handful of well-written, shocking and highly entertaining features beginning with THE GHOULS (2003) and wickedly awesome EASTER BUNNY, KILL! KILL! (2006) and now we have the slasher mind-fuck SOMEONE'S KNOCKING AT THE DOOR (2009) which easily cements him as one of my favorite up and coming horror writer/directors. This time out a group of frisky drug-dabbling medical school students decide to make for the basement of a psychiatric center and shoot an unknown drug while reading case files and listening to audio recording of two infamous former patients John and Wilma Hopper who had the unsavory m.o. of quite literally fucking their victims to death with their abnormally large genitalia. How large you say? I knew you'd ask you pervs -  a 15" dis-member with a 4" circumference and cavern so large that it definitely has some head-room. Shortly after their drug-taking adventure the group find themselves being hunted one-by-one by the gruesome twosome and shockingly raped until death. 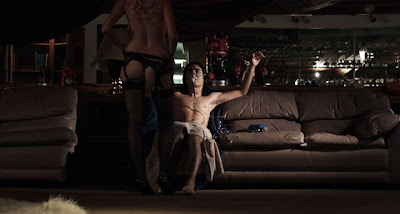 The film has a strong cast. Ferrin brings a few of his EASTER BUNNY, KILL! KILL! cast back including Timothy Muskatell as Det. Young and David Z. Stamp in a memorable performance as Det. Fullerand. Both gave unforgettable sleazy performances in EBKK. Joe Pilato (the immortal Capt. Rhodes from George A. Romero's DAY OF THE DEAD) who also appeared in Ferrin's THE GHOULS makes a short cameo. New to Ferrin's films is familiar face Noah Segan (DEADGIRL, CABIN FEVER 2: SPRING FEVER) as Justin, the most-likable of the group of friends and Ezra Buzzington turn as murdering rapist John Hopper is just brutal and disturbing and that's before you see his 15" death rod! Very guttural and grimy. You just see the guy and think "this motherfucker is gonna rape me to death, I just know it!".

The gore-effects in the film are truly stomach churning but surprisingly restrained as we often catch just a quick flash that only serves to make your mind wander and stagnate on some fresh hell you've only glimpsed of. I was feeling queasy a few times as watching someone having the circumference of their mouth bloodily enlarged via a throbbing flesh rocket might do, but it could have of been worse, trust me.

DVD: SOMEONE'S KNOCKING AT THE DOOR (2009) comes to DVD from exploitation grinders extraordinaire VICIOUS CIRCLE FILMS. The film is presented in 2.35:1 anamorphic widescreen transfer and Ferrin and his cinematographer make the most of their indie budget with great colors and a snappy stylized look that  pops with 5.1 surround sound that utilizes not ramped-up audio jump scares but a jarring skronk and skree that makes you feel  uneasy, its effective stuff. I reviewed a bare bones screener (dang) but the retail version is jam-packed with a generous amount of bonus content.

Special Features:
- Audio Commentary with director Chad Ferrin and actor Noah Segan
- Audio Commentary with director Chad Ferrin and actor Timothy Muskatell
- 40 Min. Making-of Documentary
- Deleted / Extended Scenes
- Original Poster Artwork
- 5 Min. Black-and-While Film TALDON DRUG TEST SUBJECT #1
- Segan-directed music video "Say It" by Andrew Lynch
- Three SOMEONE'S KNOCKING AT THE DOOR Trailers
- Previews of director Chad Ferrin's EASTER BUNNY, KILL! KILL!! and THE GHOULS
VERDICT: This is the 3rd film from Ferrin I've seen and it's an awesome bit o' disturbing. Strange, deranged and fucked-up - let the good time's roll. Is it redeeming, is there a moral? Kids, don't do drugs particularly those you've found in the basement of a psychiatric center. Definitley anxious to check out Ferrin's next project called DANCES WITH WEREWOLVES which i slated for a 2010 release. ***1/2 (3.5 out of 5 stars)