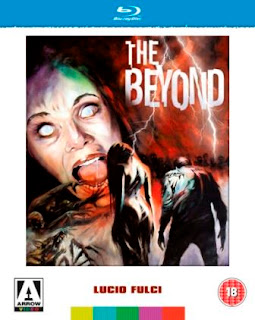 PLOT: If your new business venture is sited on the cursed gateway to the hell dimension of The Beyond, then maybe it’s time to move elsewhere but Liza (Catriona MacColl) is determined to make her New Orleans hotel work, until strange things start happening, people vanish and her waking thoughts are haunted by a ghostly blind woman who seems to hold the answers to the whole bizarre fever-dream. As reality breaks down and the plot explodes, Liza must journey far from everything she understands and descend in The Beyond...

FILM: Italian gore-master Lucio Fulci's THE BEYOND (1981) is pt.2 of the unofficial Gates of Hell trilogy which began with CITY OF THE LIVING DEAD (1980) and ended with insanity that is THE HOUSE BY THE CEMETERY (1981).  The connective tissue that bind this gruesome trio seems to be the apocalyptic effects of the dead entering the world of the living.  The film was heavily censored for it's outstanding gore sequences upon release and was granted a release here in the states under the lesser title SEVEN DOORS OF DEATH, which was also substantially edited.

The pre-credit sequence opens in 1927 as an angry mob enter the Seven Doors Hotel where they apprehend a painter named Schweick who's dabbling in the dark arts has led to the discovery that the hotel is built upon one of the seven gates of Hell as written about in a cryptic tome known as Eibon . They torture him, nail him  crucifixion-style and throw quicklime upon his body and watch as it eats away his flesh, it's truly grotesque. Their need for vengeance sated the mob don't realize their acts have set in motion a chain of events that will bring apocalyptic ruin upon the Earth. Fifty years later a young woman named Liza (Catriona MacColl) inherits the hotel and has plans to renovate the property but as you can imagine renovating one of the seven portals to Hell is fraught with problems. For starters the water in the basement is waist high - enter a rather unfortunate guy aptly named Joe the Plumber who is the first but certainly not the last in this film to receive the patented Fulci eye-trauma, it's a scene that nearly bests the infamous eyeball vs. splinter scene from Fulci's own ZOMBI 2 (1979). Other characters figuring prominently into the story include an apparition of a blind woman named Emily (Cinzia Monreale) whom only appears to Liza warning her to leave the hotel and not return but Liza isn't easily frightened despite the strange happening at the hotel. Following the near-death accident of a day laborer Liza also meets Dr. John McCabe (David Warbeck) who while skeptical of all things supernatural joins forces with Liza until the intensely eerie Hell on Earth finale. 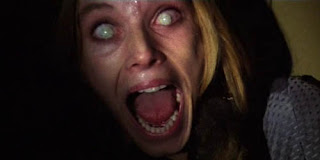 The Beyond is truly thin in the plot department and has a few confusing non-linear bits that will surely dismay some folks but not me. It's as simple as woman moves into a haunted hotel which rests upon one of the seven gates of hell and nightmarish crazy things happen - 'nuff said. Fulci's signature eye mutilation, tense atmosphere  and sickening gore are all accounted for as the typical quirky dialogue exchanges, the usual classic Italian to English dub stuff. My favorite bit of dialogue has Emily screaming to her dog to "Attack! Dicky! Dicky Attack! Attack Dicky!" shortylt before it turns it's teeth on her which always makes me sequel with delight. We get the aforementioned eye-trauma, a truly gnarly tarantula attack, the vicious canine encounter, sulphuric acid to the face, a full on zombies assault and a heinous head, it's great stuff. The special effects work of Giannetto de Rossie is mostly superb throughout with the exception of some piss poor tarantuals and are on par with his work on Zombie 2. Thin though the plot may be The Beyond is an effectively chilling film, very eerie and steeped in dark atmosphere helped no doubt by the setting of the film in Louisiana. It's a great looking feature with fantastic cinematography that just happens to be stuffed with outstanding gore. Fulci was a true filmmaker and The Beyond is a very technically accomplished film.

I've only seen a handful of Fulci films outside of the Gates of Hell trilogy; THE PSYCHIC (1977), ZOMBI 2 (1979), and THE BLACK CAT (1981) and each is a wonderful excursion into the realm of Italian cinema that I can easily recommend. I'm far less familiar with his early 70's output like  DON'T TORTURE A DUCKLING (1972) and A LIZARD IN A WOMAN'S SKIN (1971) and look forward to discovering each in it's own time. It's comforting to know that there's so much more to discover from Fulci.

BLU-RAY: The Beyond gets a brand new HD restoration and is presented completely uncut in it's original aspect ratio 2.35:1 (16x9) anamorphic with English 5.1 DTS-HD Master Audio and original English and Italian mono audio options with English subtitles for both the Italian and English language tracks. The DTS-HD Master Audio 5.1 is immersive with a surprising amount of depth to it. Frizzi's score sounds brilliant and the effects really leap out of the surrounds. The films appears quite crisp with vibrant colors and great black levels with a healthy amount of film grain present but not distractingly so. It should be noted that I am reviewing a pre-release screener that may not be representative of the film final release. As an example; the prologue is errantly presented in monochrome black and white and not the intended sepia tone.  Arrow Video are aware of the issue and have taken action to correct this on the commercially available release.


Disc 1 special features include a fun commentary with stars Warbeck/MacColl. They have a playful rapport with each other as they remember fun facts from the shoot. This commentary is a carry-over from the Grindhouse Releasing DVD.  There's also a commentary featurng Fulci's daughter and Calum Waddell speaking about not just THE The Beyond but her father's films and legacy. The 1st of 2 featurettes is AKA Sarah Keller: Cinzia Monreale remembers ‘The Beyond’ (25:04) which features the still stunningly gorgeous Monreale fondly recalling her work with not only Fulci but director Joe D'Amatto on the film BEYOND THE DARKNESS. She also speaks to her perceptions of violence in cinema and her memories of shooting the film in Louisiana and Rome. Rounding out disc 1 is Catriona MacColl Q+A from the Glasgow Film Theatre (20:08) that is moderated by Calum Waddell as the star discusses several of her collaborations with Fulci, the script and her relationship with the director and there's also an easter egg.
﻿
﻿

﻿Disc 2 special features begin with One Step Beyond: Catriona MacColl Remembers a Spaghetti Splatter Classic (29:09)  a conversation in English as the star recalls being on set and working with Fulci. Beyond Italy – Louis Fuller and the Seven Doors of Death: Interview with US distributor and editor of ‘The Beyond’ Terry Levene (20:21) is a fascinating interview with the film's American distributor as he describes his life in film distributing grindhouse classics CANNIBAL FEROX, ZOMBI FLESH EATERS and THE LIVING DEAD AT MANCHESTER MORGUE among many others. This is essential stuff, fans of Italian cinema are in for a real treat. Equally fascinating is Butcher, Baker and Zombiemaker: The Living Dead Legacy of special effects wizard Gianetto Di Rossi (30:32) as the Italian effects master Rossi recalls his most famous works including the trademawk eye-trauma in both ZOMBI 2 and THE BEYOND as well as the tarantula attack. Fulci Flashbacks: Dario Argento, Daria Nicolodi, Sergio Stivaletti, Antonella Fulci and others remember The Godfather of Gore (25:08) is a collection of fond Fulci memories from many familiar face including Argento and Nicolodi who is always a great interview. Finishing off disc 2 extras are an interesting Alternative Colour Pre-Credits Sequence (16:02)  which presents the pre-credit sequence in color from the German cut of the film and the Original International Trailer (3:15). 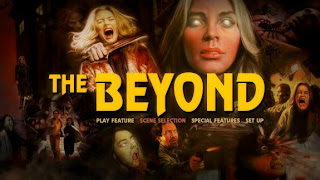 DISC 2 SPECIAL FEATURES
(Region 0 PAL)
- One Step Beyond: Catriona MacColl Remembers a Spaghetti Splatter Classic (29:09)
- Beyond Italy – Louis Fuller and the Seven Doors of Death: Interview with US distributor and editor of ‘The Beyond’ Terry Levene (20:21)
- Butcher, Baker and Zombiemaker: The Living Dead Legacy of special effects wizard (30:32)

- Fulci Flashbacks: Dario Argento, Daria Nicolodi, Sergio Stivaletti, Antonella Fulci and others remember The Godfather of Gore (25:08)
- Alternative colour pre-credits sequence (16:02)
- Original International Trailer (3:15)
VERDICT: When one thinks of the films of Lucio Fulci it's either Zombi 2 (1979) or The Beyond (1981) that spring immediately to mind and for good reason. These films are wonderful examples of gruesome Italian horror cinema and are both excellent films to jump into for the uninitiated. An equally gorgeous and grotesque example of Fulci's nightmarish imagery and surreal atmosphere. As with many Arrow Video editions of beloved genre classics it is easy to give this a high recommend without reservation. Transfer error aside the numerous bonus features are truly outstanding and give fans of the director a true appreciation for his work as well as the talented folks who made it possible. A stunningly gore-geous masterstroke of Italian cinema. 4.5 outta 5
Posted by Ken at 12:06 PM