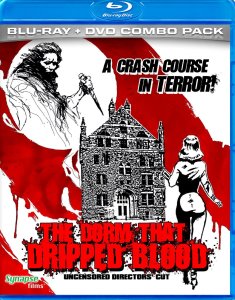 
SYNOPSIS: On the eve of Christmas vacation, a college dormitory stands condemned… the dark halls now vacant, and unsafe. Student Joanne Murray and her close friends volunteer to help close down the building, unaware a psychopathic lunatic is hiding in the shadows. As the students disappear one by one, Joanne discovers the horrifying reality that if she is to survive, she alone will have to find a way to slay the brutal murderer.


FILM: After seeing HALLOWEEN (1978) and FRIDAY THE 13th (1980) film school graduate students Jeffrey Obrow and Stephen Carpenter figured they could probably do something similar and crafted a low-budget dorm slasher called THE DORM THAT DRIPPED BLOOD (1981)  (aka PRANKS aka DEATH DORM). The setting is a college campus during Christmas break and after 75 years the Morgan Meadows Hall is being decommissioned for remodeling. Senior Joanne Murray (Laurie Lipinski) and four others have volunteered to inventory and remove furniture and equipment from the dorm in preparation of it's renovation. What the Hell is wrong with these kids, it's Christmas Break for Christ's sake! They have nothing better to do? Whatever, the four other victims, err.... volunteers are Brian (David Snow), Patti (Pamela Holland), Craig (Stephen Sachs) and Debbie played by the very cute Daphne Zuniga whom you will likely recognize from THE SURE THING (1985), SPACEBALLS (1987) and THE FLY II (1989) and the shitty prime-time soap opera MELROSE PLACE. Early on Debbie informs Joanne that she won't  be  staying cuz her grandmother has fallen ill but volunteers to assist until her parents arrive. No sooner have her parents pulled-up to the dorm when Dad takes a spiked-bat to the head in the stairway. Next, the stealthy killer sneaks in through the backseat of the family car and strangles mom with wire. Moments later Debbie stumbles upon her parents bodies and faints. The killer then positions her underneath the car's tires, throws it in reverse and crushes her. That's three kills in just a few minutes and it's all pretty good if a bit typical for the genre.
﻿﻿﻿﻿﻿﻿﻿﻿ 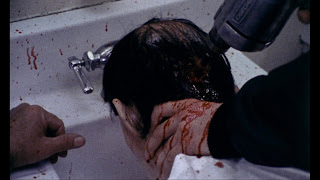 ﻿﻿﻿﻿﻿﻿﻿﻿Also typical of the genre is the introduction of plausible red herrings. There's Bill (Jake Jones) the maintenance man who works strangely late hours, local businessman Bobby Lee (Dennis Ely) who comes to pick-up furniture and comes off rather sleazy and then there's John Hemmit (Woody Roll) a creepy vagrant who lurks around campus giving the group the willies. There are also the obligatory ineffective campus police. So, yeah, this is a pretty standard stalk n' slash formula as students are picked-off one. The kills are gruesome, we've got someone being boiled alive (my favorite), a grisly drill to the back of the skull with fragments of skull and brain splattered all about and a truly twisted ending that involves an unconscious body being thrown in a fiery incinerator. Don't be put off by the fact that this is a by the numbers slasher or that the acting is undeniably amateur hour. Our final girl and the lunatic antagonist both offer up some acting chops, everyone else is slasher fodder - who cares. Sure, there are some sequences that drag and I don't think the film is particularly well-shot but as a low rent slasher I think the film is mostly effective and decently entertaining with some great gore, a smidgen of nudity and a good and twisty ending that will reward a drunken viewing with friends. 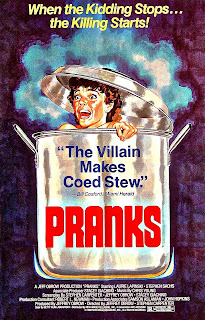 BLU-RAY: The story goes that Synapse received a 35mm print of the film in preparation of this release when they realized that what they had in their possession was a cut of the film previously unseen for thirty years. Definitely read the Synapse Films blog post detailing the discovery, restoration and manufacturing difficulties of the release HERE. That's pretty neat but do the cuts scenes amp up the gore to a degree that transforms the film from a second tier stalk n' slash to seminal 80's slasher? Nah. Remember a few years back when the special edition of MY BLOODY VALENTINE (1981) was released and we were treated to previously unseen gore delights? Here we get a few bits and pieces but not enough to transform it to such a a degree. I don't think every 80's slasher screams out for a deluxe Blu-ray release and that's why I love Synapse Films. They're giving these obscure gems super-sweet definitive editions with ideal presentation and newly created bonus content. THE DORM THAT DRIPPED BLOOD comes to blu-ray in a 1080p 1.66:1 aspect ratio transfer with a MPEG-4 AVC video encode and  DTS-HD Master 2.0 mono audio. The print is grainy and a bit grimy and definitely looks every bit like the 16mm blown-up to 35mm that it is but the colors are vibrant and the black levels are strong. 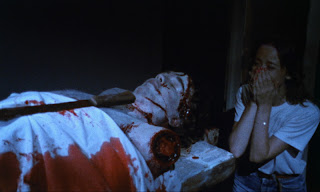 Supplemental features include a commentary with directors Jeffrey Obrow and Stephen Carpenter who are in fine form and obviously enjoy talking about the film in-depth. MY FIRST SCORE (8:11) is an interview with composer Christopher Young who would go onto compose scores for INVADERS FROM MARS (1986) to DRAG ME TO HELL (2009). He went onto enjoy a prolific career though he seems a bit embarrassed by this score, perhaps because it sounds like he nicked a few bits of Harry Manfredini's iconic FRIDAY THE 13th (1980) score as well as the shrieking string stingers from Bernard Hermann's PSYCHO (1960). If you gotta steal, steal from the best, right? Be sure to check the isolated music track in DTS-HD Master, it's a strong score and enhances the film. MY FIRST SLASHER (9:28)  is an interview with the make-up FX creator Mathew Mungle who would also enjoy a  prolific career creating make-up FX for the backwoods slasher JUST BEFORE DAWN (1981), A NIGHTMARE ON ELM STREET 3: DREAM WARRIORS (1987) and Christopher Nolan's INCEPTION (2010). He makes a reference to a never-seen dismemberment scene that does not appear in the film ...and the legend grows. Rounding out the special features are two trailers for the film; the original theatrical trailer and another under the alternate title PRANKS plus a reversible cover with the alternate PRANKS artwork. Not a film that screams for the deluxe Blu-ray treatment but damn I love Synapse Films for giving it to us.

SPECIAL FEATURES:
- Reversible cover with alternate PRANKS artwork.
- Audio commentary featuring directors Jeffrey Obrow and Stephen Carpenter
- MY FIRST SCORE (8:11) - interview with composer Christopher Young
- MY FIRST SLASHER (9:28) - interview with Make-Up FX Creator Mathew Mungle
- THE DORM THAT DRIPPED BLOOD Trailer (1:26)
- PRANKS Alternate Title Trailer (1:53)
- Isolated Music Track
- DVD of the film that carries over the special features
VERDICT: By all accounts 1981 was a pretty fantastic year for slashers and the popularity of these bloody-soaked splatterfests was at an all time high. That year alone theatre goers were treated to some true classics of the genre: THE BURNING, FRIDAY THE 13th Pt. 2, HALLOWEEN II, THE PROWLER and MY BLOODY VALENTINE. While THE DORM THAT DRIPPED BLOOD is definitely not in the same league as those titles it runs circles around either FINAL EXAM or GRADUATION DAY and will sit proudly on my DVD shelf alongside BLOODY BIRTHDAY, JUST BEFORE DAWN and HAPPY BIRTHDAY TO ME as an obscure slice of slasher cinema that's well worth a watch. A recommend to fans of obscure slasher cinema.  2.75 outta 5
Posted by Ken at 5:25 PM