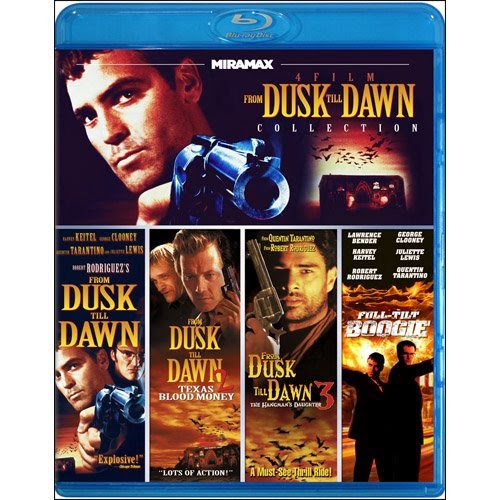 I am still in San Antonio on an extended training trip for the new job, working 74 hours a week is sort of shitty and what little downtime I do have is off hours leaving me few choices other than to sit on my uncomfortable couch and watch a movie or two - which isn't so bad. This week I was able to sift through the Echo Bridge Entertainment FROM DUSK TILL DAWN 4 Film Collection on Blu-ray featuring the classic original team-up of Quentin Tarantino and Robert Rodriguez plus the two straight-to-video sequels and the full length documentary FULL TILT BOOGIE.

FROM DUSK TILL DAWN has the distinction of being written by Quentin Tarantino and directed by Robert Rodriguez and it's a stone cold vamp classic. The introduction to the film is outstanding as actor Michael Parks (RED STATE) portrays a Texas Ranger who enters a liquor store to quench his thirst and use the crapper. He shoots the shit with the clerk (John Hawkes) for a bit and when the old man heads for the bathroom it's revealed that the clerk and a few young women are being held at gun point by a pair of wanted men - brothers Seth and Richard Gecko played by George Clooney and Quentin Tarantino. The Geckos havejust robbed a bank and are on the run seeking refuge in Mexico at a place called El Rey. En route they kidnap a family of three at a hotel. A priest (Harvey Keitel) whose lost his faith and his two teen children Kate (Juliette Lewis) and Scott (Ernest Liu) who are forced to smuggle the brothers across the border in their RV.


Clooney is a straight-up thief while his brother Richard is something a bit more fucked-up - a deranged psychopath and violent rapist. Seth loves his brother but clearly finds his brothers depraved proclivities and taste for blood disturbing - especially when he rapes and kills a middle-aged woman -  it's disturbing stuff.

Amidst the booze and boobs it's revealed that the bar is stuffed to the brim with bloodsucking vampires and our band of misfits must band together with a few other patrons to defeat evil. We have some great cameos from Fred Williamson (HELL UP IN HARLEM), Tom Savini, Danny Trejo (MACHETE) and Greg Nicotero who stomp major vampire ass, it's hard to forget Savin's crotch-cannon.

There's a ton of fun practical gore gags here - the blood is pouring off the screen during the final third of the film but I do have some beef with the effects, most of the vampire make-ups and the digital-aided transformation scenes have dated quite poorly. I just wish I had enjoyed the designs more but it's not awful.  A few qualms about the creature design aside this is a top-tier vamp flick with elements of a bad-ass grindhouse cinema, Tarantino's dialogue is pretty sweet and Rodriguez's directing and editing is very sharp. Plus we have some gruesome special effects work from the KNB EFX group - this one is firing on all cylinders from the get-go. 4 Outta 5

Three years after the original theatrical release Miramax entered the direct-to-video market with a sequel directed by Scott Spiegel (INTRUDER) and starring Robert Patrick (T2: JUDGEMENT DAY) as Buck - an ex con who puts together a group for a new heist - they're out for money but what the end up with is a battle against undead bloodsuckers. I love me some Robert Patrick but he cannot save this one - it's a bit by the numbers and uninspired - plus it looks pretty damn cheap and lacks the boobs, blood and script of the original. What it does have is a few patented Scott Spiegel POV shots which are just crazy - almost every scene features a nutty POV shot from the bottom of a dog bowl, a beer cooler or from the back of a vamp mouth - weirdness - watch Spiegel's slasher entry  INTRUDER (1989) to see more of his weird POV.

It starts off with brief cameos from Bruce Campbell (EVIL DEAD) it's pretty damn short - even by Campbell cameo standards. The effects are awful - those damn bats are just horrendous. The Titty Twister bar is reborn here to some degree and Danny Trejo returns as Razor Eddie the bartender - but he comes and goes pretty damn quick.


The same year as the first sequel we get a third entry - a prequel which tells the origin story of the vampire princess Satanico Pandemonium from the first film sans Salma Hayek - so right from the start we're at a deficit. What we do have is the return of actor Michael Parks, this time as the American author Ambrose Bierce who is travelling through the West shortly after the American Civil War to join ranks with the Mexican revolutionary Pancho Villa. En route he meets a priest (Lennie Loftin) and his new wife (child-killer Rebecca Gayheart) and the trio's carriage is overtaken by a group of bandits lead by Johnny Madrid. Madrid  (Marco Leonardi) recently escaped the noose and has taken the gorgeous young Esmerelda (Ara Caeli) hostage - she's the daughter of a hangman and her abusive father is on Madrid's trail.

Later that night the travelers, thieves and the hangman's posse all end up at a whorehouse which we discover is a familiar place from the first and second films. Much as with the first film as the groups gather at the whorehouse the bloodsucking shit hits the fan as the sexy undead drain the precious bodily fluids.

Having Parks back is a plus - he lends a certain gravitas to the film that was lacking from the first sequel. The setting is better, the cast is improved and the writing is a bit richer - while not on par with Tarantino's script it's serviceable. I enjoyed the vampire make-ups here - more so than even the first film but the digital effects are just as awful.

Sonia Braga (KISS OF THE SPIDER WOMAN) appears as Quixtla - the madame of the whorehouse and the mother of the half-blood vampire Esmeralda. As Santanico Pandemonium actress Ara Celi is quite a feast for the eye. We have some fun make-up effects, a story that is entertaining and some nice action sequences and set pieces, not nearly the film that the original was but at least it's entertaining which is more than I could say for previous entry. 2.5 Outta 5

The feature length doc about the making of the first film is a decent watch but it focuses mostly on the non-union crew members and not enough on the writer and director for my tastes, what little screen time we do get with Clooney and Tarantino feel like scripted comedy bits and the soap opera drama of the crew members bored me to tears. 2.5 Outta 5

Blu-ray: The Blu-ray from Echo Bridge features all four films crammed onto a single disc. The original films looks nice in 1080p with strong colors, varying degrees of crispness and a natural layer of films grain. It's not perfect, the HD image varies from scene to scene with some black crush. It also sports an English language DTS-HD Master Audio track with well balanced score, dialogue and effects - there are no subtitle options. The A/V quality of the sequels less pleasing with varying degrees of image softness, black crush and artifacting with  FROM DUSK TILL DAWN 2: TEXAS BLOOD MONEY looking the worst - that sequel also features on as DTS-HD 2.0 track. FROM DUSK TILL DAWN 3: THE HANGMAN'S DAUGHTER sports a 5.1 mix and a slightly better transfer but it's not great. There are no extras on the disc unless you include the inclusion of the feature length documentary FULL-TILT BOOGIE.

Verdict: I would have preferred at least a 2-disc set instead of the four titles crammed onto a single Blu-ray but you do get a lot of bang for your buck with this one. FROM DUSK TILL DOWN looks and sounds quite nice in 1080p - all the other titles fare considerably less. If you love the first film I recommend buying the stand alone Blu-ray but for the more adventurous types and completest why just snag the whole set. The first sequel is pretty awful but there's some fun to be had with the prequel - for a few bucks there's a lot of value here if not a ton of entertainment but there's no denying what a great film the original is. 3 Outta 5
Posted by Ken at 10:02 AM