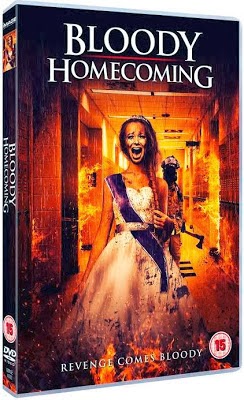 
It's been three years since Winston High School's star athlete and wanna-be rapist Billy (Jesse Ferraro) was burned alive at the homecoming dance. The group of freshman responsible for his demise are now seniors and as the homecoming festivities get underway the teens receive ominous "Happy Homecoming" notes in their lockers - it seems someone might want them dead - but who?

Here we have a fun assortment of high school archetypes represented including the straight arrows Steve (Alex Dobrenko) and Laura plus horny burnouts Robbie (Shaleen Cholera) and Nora (Elizabeth Bigger), a trio of vapid cheerleaders Cheryl (Victoria Park), Darcy (Hillary Wagner) and Cassie (Taryn Cervarich) and the class president Wade (Branden Lee Roth). The cast do a decent job with the sometimes adversarial teen friendships which are full of sarcasm and  teen drama as you might expect, the characters are decently fleshed-out and once the body count commences you actually do feel some sense of loss for these folks, a good job on part of the writer and cast creating more than just cookie-cutter stereotypes. Even the homecoming queen Cassie is given more depth than what you might expect from a slasher entry and I appreciated that. The teens felt like teens and the humorous/sarcastic dialogue came across appropriate and was pretty funny, I laughed quite a bit.

The teaching staff get some decent screen time as well, we have the pervert principal Mr. Patterson (Steve Earnest), a handful of teachers, the lecherous football coach (David Young) and the requisite creepy janitor (Jim Tavare) who seems to be channeling Michael Berryman (The Hills Have Eyes). While the staff are not developed quite as much as the student body we do get some fun exchanges between the staff and student, some more than others.

Our masked-killer wears a fireman turnout coat and helmet face-mask to conceal their identity. The look definitely added a My Bloody Valentine (1981) by way of Prom Night (1980) flavor to the film, the murder weapon of choice is the coveted Winston Wildcats spirit baton that goes missing early on in the film, it's  fine choice of weapon and does the deed nicely. Occasionally the killer branches out a bit and at one point suffocated a victim with a burst balloon skin which I give credit for originality if a bit odd.

As the killings get underway we have a nice assortment of baton-killings, they're not gore-soaked but there's plenty bloody. There's not a lot new under the sun as killings go but they're executed nicely and I don't require a ton of originality to enjoy a retro-slasher and Bloody Homecoming does just fine with an admirable body count and decent kills.

I didn't guess the identity of the killer but the revelation is decent and we get a fun monologue as the murderer lays out the motivations for the murder-spree, again it's not original by any means but nicely done. The shortest straw of the film would be a few of the performances seem awkward but overall this was just a damn fun watch with steady performances, a decent amount of humor and some decent low-budget deaths.

The film is low budget but has very nice production value, it doesn't feel cheap. The digitally shot image looks just fine and while I wasn't in love with the slightly desaturated aesthetic it is well shot with some nice camera movement and decent editing. The score definitely has a bit of John Carpenter (Halloween) flavor to it from time to time as well as that particular stressed-strings sound I usually attribute to an influence from Stanley Kubrick's The Shining (1980).

Bloody Homecoming (2012) is a damn decent slasher entry that doesn't stray far from the established formulas and that's just fine by me, I like my slashers straight-up without a lot of irony. What it does it does quite well and the end result is a very enjoyable retro-slasher with a Prom Night (1980) by way of My Bloody Valentine (1981) flavor - what's not to enjoy? The film is available on March 4th in the UK from Image Entertainment and currently available here in the US from image on DVD.  3 Outta 5