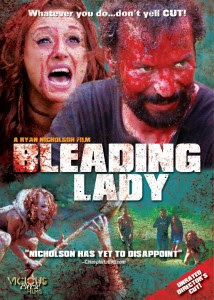 PLOT: Don is a chauffeur and a movie buff who takes his job seriously - very seriously. When his latest assignment takes him to the set of a low-budget horror film, he's overjoyed to learn he'll be driving Riversa Red - His favorite B-movie "Scream Queen." While driving his beloved idol, Don assumes the role of bodyguard and turns fiercely protective, especially after learning that Riversa has a stalker. Hell-bent on protecting his queen and fueled by paranoid fantasies, Don's usual temper tantrums go to fatal extremes. Soon he proves to be not only Riversa's biggest fan, but her worst nightmare as well. 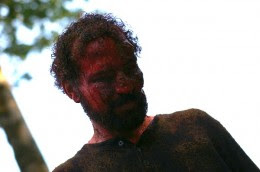 FILM: I must say I'm always pleased to see a screener from exploitation DVD label Vicious Circle Films. The have released some genuinely good exploitation gems in the past few years including EASTER BUNNY, KILL! KILL! (2006),  RUN! BITCH RUN! (2009) and SOMEONE'S KNOCKING AT THE DOOR (2009), real bloody good sleazefests all of 'em. The only let down for me recently is the soon-to-be-released porno queen turned scream queen Tori Black werewolf  feature  HALF MOON (2011). One minor misstep aside and outta the blue comes BLEADING LADY (2011) (previously known as STAR VEHICLE) from Canadian director Ryan Nicholson of GUTTERBALLS (2008) notoriety. This is my first Nicholson film and after polling my trusted inner circle of imaginary twitter and faceboook friends it was a pretty fair split right down the middle between love 'em and hate 'em so with that in mind I went into Nicholson's latest film, the slasher Bleading Lady. 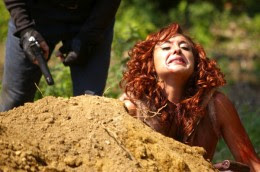 The film centers around Don (Dan Ellis), a short-tempered chauffeur on a low-budget backwoods horror film set. How short tempered you may ask? Well,  it don't take much... the film begins as he's transporting some obnoxious movie extras from the set when they push all the wrong buttons. Don pulls off the main road and orders them out at gunpoint, pulls out a machete and begins gloriously hacking the shit outta 'em. Blood is spaying everywhere, it's a real gorefest. Minutes later he back on the job driving a smoking hot scream queen named Riversa Red (Sindy Faraguna) to the set. Turns out not only is Don a deranged chauffeur but also a horror nerd (now that's a 50/50 mixture of nuttiness) and he knows pretty much everything there is to know about Riversa Red who's star seems to be on the decline. Don finds out that the starlet has a stalker and he takes it upon himself to become her own personal bodyguard, but who's going to protect her from the nightmare that is Don? Between his paranoid delusions, the snot-nosed actors and the wanna-be director of the film Don is in a real hack n' slash mood.  He begins fulfilling his paranoid fantasies by taking out cast and crew one by one until he eventually shows up on-set with a 9mm and forces the remaining cast and crew to film his own gruesome little hand-held horror gem which is interrupted by the starlet's stalker. . 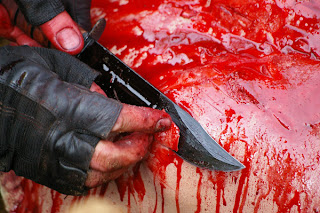 There's a bit of commentary and comedic satire on the current state of horror filmmaking vs. old school movie-making as Don takes aim at modern slashers and actresses in particular calling the current crop of scream queens "whores" who are merely pimping their bodies while Riversa takes a more sympathetic point of view. Commentary and comedy aside Bleading Lady does not skimp on the tits or gore. We've got blood spattered mayhem throughout the film including a gruesome crowbar to the face, the machette massacre and a gore-tastic beheading. The gore is really well filmed and the camera doesn't pull away for all you gorehounds out there.

Don (Ellis) is the strongest presence in the film, he's a straight shooting take no bullshit bastard and his performance reminded me of a bit of Richard Moll when Moll played weirdos in the late-70's and early-80's. He's a fairly developed character and Sindy Faraguna as the scream queen Riversa Red is also fleshed out a bit. Everyone else is more or less slasher fodder. The idea of a film within a film has always appealed to me and the concept of a slasher on the set of a slasher film is even better and it works wonderfully here, more so than the familiarly themed BRUTAL MASSACRE: A COMEDY (2008) or Israel Luna's FRIGHT FLICK(2010).

DVD: Ryan Nicholson's Bleading Lady (2011) comes to DVD in an unrated director's cut from Breaking Glass Pictures imprint Vicious Circle Films. The film is presented in 16:9 enhanced widescreen with a choice of 2.0 stereo or 5.1 surround audio. The film is definitely low-budget and it shows some flaws here and there plus the dvdr screener probably didn't help the image either.  The screener contained none of the special features but if you snag the film on March 29th when it is to be released here's what you'll find: 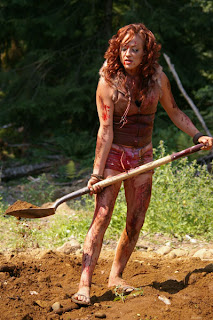 SPECIAL FEATURES:
- "Behind the Wheel: The making of Bleading Lady"

VERDICT: At a briskly paced 76 minutes BLEADING LADY is a blood-soaked definite good time, no slasher should exceed 92 minutes in my book. I give this a recommendation and I'm definitely interested in checking out Nicholson's previous films based on this, very enjoyable stuff. ***1/2 (3.5 out of 5 stars)
Posted by Ken at 7:30 PM