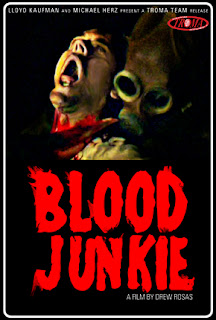 Synopsis: High school senior Laura Mills’ parents are gone for the weekend, leaving her stuck at home baby-sitting her lame little brother. When her friends invite her on a camping adventure, she decides to join the fun and drag him along. But what starts out as a killer weekend, might just become a killing one when they discover an abandoned building where evil resides!

Film: High school seniors circa 1989 Laura (Sarah Luther) is stuck babysitting her dorky kid brother Andy (Brady Cohen) for the weekend. Taking the $35 dollars her parents left for emergencies she instead calls her bestest friend Rachel (Emilt Treolo) and the two head to the convenience store to score some beers after sweet talking the pedophile behind the counter to kindly overlook their age. Outside the store they meet the rat-stached Teddy (Mike Johnson) and Nick (Craig Wilson) who invite them camping for the weekend, and who can resist the charms of a two denim clad late-80s dorks in a sweet baby blue station wagon, certainly not Rachel. Before ya know it Laura slips her brother five bucks to keep mum about the clandestine weekend and drags her brother along for the fun. That night around the campfire mullet-headed Nick spins the urban legend of a chemical plant worker who disappeared after an explosion but is said to haunt the woods. That next day a killer in a gas mask starts picking 'em one by one. 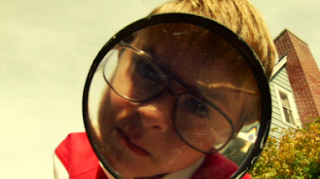 Okay, so that's a pretty standard 80's slasher storyline, huh? Well, that's not the only thing 80's here. This is one of the finest retro 80's slasher films I've seen, the House of the Devil of retro-slashers. The film opens with a hitchhiker making a campfire inside an abandoned warehouse. As he chows down on a can o' beans our gas-masked killer comes out of the darkness, cue the title card and an sweet synth stinger 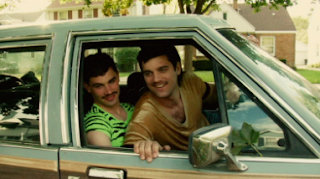 Writer-director-editor-composer Drew Rosas has a firm grasp on the 80's aesthetic, this film is steeped in 80's atmosphere, fashion and horror cliches. The film is funny but doesn't lampoon the genre, just has a bit of fun with it. The cinematography perfectly captures odd angles and lensing of the 70's and early 80's films plus the synth score is John Carpenter by way of 80's new wave.

The film has so many great elements; fun protagonists, a mysterious killer, the campground setting, an awesome campfire story, it's stylish, the score is fantastic and the acting is pretty great for a cast of relative unknowns. If it's a deal breaker there';s also some gratuitous breast shots, too. Okay, I know I'm gushing here, but honestly I enjoyed it that much. Is there anything I didn't like about the film? Sure, the tacked on ending, I didn't care for it and the film didn't need it but it's not terrible just unnecessary. That said, I cannot wait to see what's next from Drew Rosas, this is a mighty fun stuff. 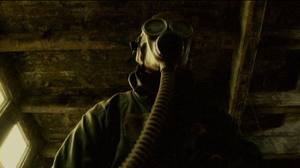 DVD: Blood Junkie comes to DVD from Troma with in non-anamorphic 1.78:1 widescreen. Really, no anamorphic transfer, c'mon what year is it? The film has been digitally stressed to give it the appearance of an early 80's slasher and looks pretty great in that regards. There's a ton of new wave grindhouse films that try to achieve this goal through similar means but this is the most successful I've seen. Great colors, cruddy black levels and and plenty of grain, it's a glorious VHS throwback in both style and presentation. There's an English Dolby Digital Stereo 2.0 soundtrack, no subtitles. The track handles the films effects and sweet synth soundtrack quite well. Special features include a great director's commentary in which Rosas goes into great detail about the making of his first feature film, it's pretty entertaining and only grew my appreciation for the film. There's also deleted scenes, a trailer, the Platsic Fangs short film, a (twenty minute!) slideshow of behind-the-scenes photos with synth accompaniment and the usual assortment of Tromatic Extras, of course. This is a film I would buy on Blu-ray if it had an anamoprhic transfer, I really would.

Special Features:
- Introduction by Debbie Rochon and lloyd Kaufman
- Commentary by Director Drew Rosas
- Deleted Scenes (9:27) 16:9
- Slideshow (19:55)
- Plastic Fangs - a short film by Drew Rosas (11:52) Fullframe
- Trailer (1:47) Letterboxed
Verdict: This is the most enjoyable Troma distributed title in quite a while, and probably the most enjoyable slasher I've watched in in ages. The quirky comedy is spot-on, the aesthetic horror elements are on-the-nose and while I think some of the gore effects are only passable it excels on nearly every other level. Drew Rosas Blood Junkie is a tone perfect love letter to the VHS horror section of the 1980's. Mullets, mustaches and bad 80's fashion, rock on! Blood Junkie is the Napoleon Dynamite of retro-80's slashers. Cram the couch with friends, beer it up and have a blast. 4 outta 5
Posted by Ken at 7:24 PM