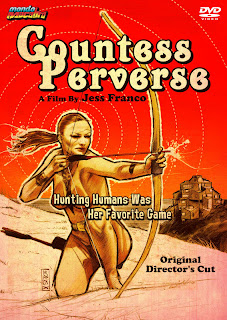 Synopsis: In the Countess Perverse aka La Comtesse Perverse (1973) a pair of decadent and debauched aristocrats turns their private island into a human hunting ground where they can stalk their naked prey. As each victim is murdered, their carcass is then cooked and fed to their guests; simply delicious! What the unsuspecting visitors don't realize is that they will soon become the next evening’s “meal, “ eventually fighting for their lives in a shocking and flesh-baring cat-and-mouse game. 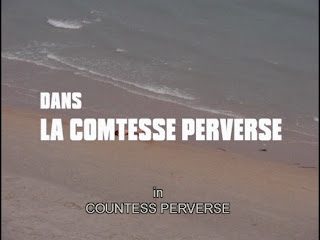 The ever-prolific Jesus Franco is a true master of Euro-sleaze cinema with a stunning filmography that's 200+ strong. Franco is someone whom I honestly cannot say I've seen a ton from but of what I have seen it's been a love it or loathe it experience. A title that I am particularly fond of is the erotic-revenger  She Killed in Ecstasy (1971) starring the stunning 70's sexpot Soledad Miranda (Vampyros Lesbos) which I just cannot recommend enough for Euro-cult enthusiasts. It's problematic for me that it was my first entry into the Cult of Franco because I  think it set the bar rather high for a director who's rather hit and/or miss for me.

This erotic take on the pre-code classic The Most Dangerous Game (1933) begins with a couple discovering a naked and unconscious woman on the beach. They take her back to their home where the gorgeous red-haired beauty named Kali (The Sinister Eyes of Dr. Orloff) spins a delirious tale of  traveling to the island of Count (Howard Vernon, Seven Women for Satan) and Countess Zaroff (Alice Arno, Justine De Sade) in search of her missing twin sister. We get a an odd flashback as she is transported to the eerie island on top of which sits a fantastic home, it's a bizarre construct. It seemed so familiar to me and then it dawned on me that I had previously seen it in Franco's She Killed in Ecstasy. Unfortunately the couple whom found her washed-up  on the beach, Bob (Robert Woods, Lady Lucifera) and his wife Moira (Tania Busselier, Ilsa the Wicked Warden), are in league with the Zaroff's and procure young beauties for their diabolical games. 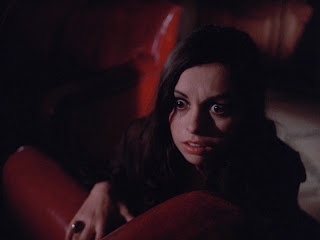 Bob and Moira are a swinging couple whom befriend young ladies, seduce them and  take them to the island of the bizarre Count and Countess Zaroff whom treat their guests to a succulent meal then tag-team rape them and then stalk their naked prey before eating them and serving them to the next guests. It's a delirious and fever-pitched slice of cinema that doesn't always make sense but never fear because Franco is a master of his craft and before your brain can properly launch a protest your mind and libido are assaulted by a feast of nubile flesh. Franco may have his shortcomings as a filmmaker but his eye for exotic locations and stunning naked women are never in doubt.  The true find for me here was the super-hot Silvia (Lina Romay, Female Vampire) as a Spanish tourist whom befriends Bob and Moira and ends up in their bed and inevitably on the island where she is seduced by the Countess only to later discover the duo in the process of beheading poor Kali. Silvia faints at the sight and awakens to find she has become prey for Countess Zaroff in the film's finale. The site of a nude Alice Arno stalking Lina Romay over the island with a bow and a quiver full of arrows is quite a sight and not one you'll soon want to forget but the final scene  featuring Robert Woods decked out in a rhinestone studded denim jacket and bell bottomed jeans wading into the ocean carrying the lifeless body of his beloved is a bit too dramatic and early 70's for me, totally laughed my ass off. There's some 70's cheese here but the cinematography and locations are quite striking as are the women. The story is pretty threadbare but it's entertaining and perverse with deviant elements that should delight any Euro-sleaze enthusiast.

DVD: Mondo Macabro's presentation of Jesus Franco's erotic-thriller Countess Perverse (1973) is presented in it's original 4:3 aspect ratio and not 16:9 as the DVD jacket would indicate. That said the transfer is sourced from a newly restored camera negative and is pretty fantastic with vibrant color and nice clarity and sharpness that's free of debris, artifact and blemishes. The French language Dolby Digital 2.0 mono audio is clean and the post-dubbed dialogue and film score sound great, especially loved the sweet fuzzed-out guitar score alternated with some less than stellar organ-mashing.

We also get a 10 pg. text essay entitled "About the Film" which is pretty informative with plus we get "Cast and Crew Profiles" of Robert Woods, Alice Arno, Tania Busselier, Howard Vernon and Lisa Romay. There's a nice Mondo Macabro video preview of a ton of Mondo Macabro titles. I haven't seen a ton of MM's stuff and this got me excited to check out a few more really soon. The films on the preview reel are Snake Sisters, The Queen of Black Magic, Silip - Daughters of Eve, Mystics in Bali, The Blood Rose, Snake Dancer, The Devil's Sword, Lifespan, Don't Deliver Us from Evil, Satan's Blood, Virgins from Hell, For Your Height Only, French Sex Murders, The Deathless Devil, Living Doll, Satanico Pandemonium, Panic Beats, Clonus, The Killer Must Kill Again, The Mansion of Madness, Alucarda, The Diabolical Dr. Z, Aswang, The Living Corpse, Blood of the Virgins, Seven Women for Satan, Lady Terminator, Crazy Love, Mill of the Stone Women, Dangerous Seductress and More!