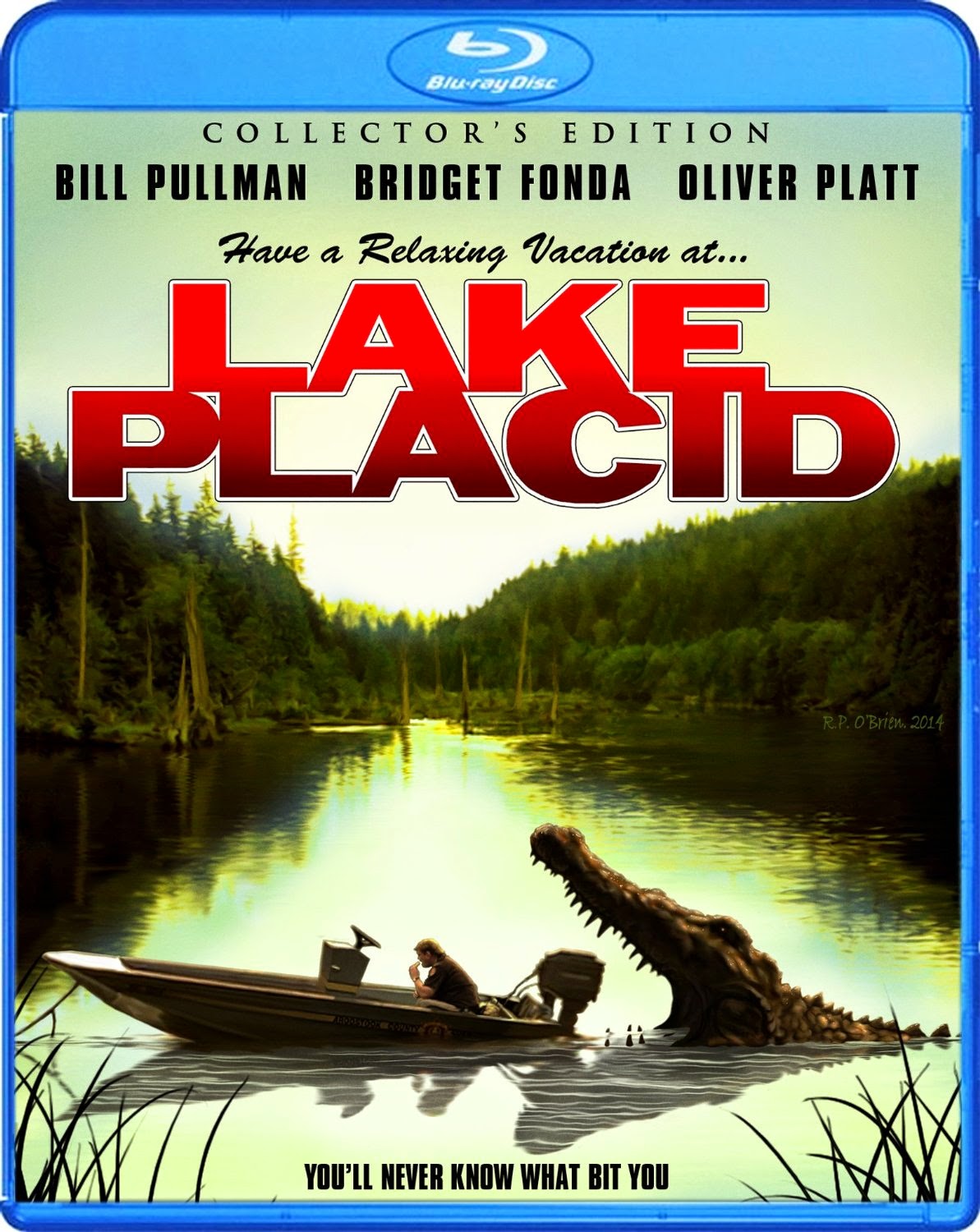 
LAKE PLACID (1999) is a damn fun creature feature, more a comedy than straight-up horror but it's loaded with some sweet gore and genuine moments of suspense but make no mistake about it though for sarcasm and wit are the cold-blooded heart of this reptilian beast. We begin with a great scene as a deputy is chomped in half while inspecting a beaver dam - no that's not a euphemism. At first it it theorized that it could have been one of those underwater grizzly bears stalking the depths of Black Lake. The sheriff  dismisses this retarded thought and it's soon quite clear that a man-eating monster crocodile is terrorizing the calm waters but no one has any idea just how massive this beast actually is.

A small group set out to track and capture the beast, we have Sheriff Hank Keough (Brendan Gleeson, IN BRUGES), Fish and Game officer Jack Wells (Bill Pullman, ID4) and American Museum of Natural History paleontologist Kelly Scott (Bridget Fonda, JACKIE BROWN) who is woefully and hilariously out of her element among the mosquito and worms. Also joining in on the croc crusade is a pompous mythology professor who moonlights as a weird crocodile whisperer Hector Cyr (Oliver Platt, X-MEN:FIRST CLASS) plus various red-shirt types who end up as headless croc-chum. The secret weapon of the cast is the foul-mouthed Betty White (TV's GOLDEN GIRLS) who made a name for herself in the past few years as a nasty granny but this was the first time we saw her turn blue in a hilarious turn as a nutty blue hair who turns out to be at fault for the reptilian plague.

The humor elements works for me, much of it derived from the interactions of the characters ore so than clumsy prat falls - it makes for a fun watch. The pompous Hector constantly talks down to the small town sheriff who is no fan of the sarcasm that routinely falls out of the mouth of just about everyone who's not him. Pullman's a bit dry compared to the rest of the cast - maybe a bit miscast - but he does just fine as the straight man with a wry sense of humor. Platt and Gleeson are a fun adversarial duo regularly trading barbs and one line stingers.

The now 15 year-old special effects hold-up surprisingly well including some early stage digital effects. Miner went with a mix of digital and practical effects with the vast majority being old school physical in-camera stuff much to the benefit of the film. None other than Stan Winston (JURASSIC PARK) created the 30 ft. animation croc used in the film and it's a stunner of a beast. Watching the extras I was surprised to learn the cow on the helicopter sling was animatronic which blew my mind - I thought that was a real heifer! The are some great moments of gore -   they start off strong with the initial kill as the deputy is torn in half and lifted from the water into a boat - his entrails hanging from his torso - this is some good stuff.

The film failed to find audiences in theaters back in 1999 with it's odd mix of comedy and horror - the studio just didn't know how to market such a film - they seem to have a hard time with these genre benders. Not horror enough for the gore-hounds and not comedic enough for the comedy lovers but as I sat in my seat watching this fifteen years ago I was quite a happy camper and revisiting again over a decade later it holds-up just fine.

The Blu-ray from Scream Factory looks quite nice which is not too surprising given this is one of the more recent films they've given the Collector's Edition treatment to. The source element used for the HD master looks great with only the most minimal of white specks. The grain structure is intact but the fine detail is not as strong I would have hoped for from a newer film. We do get some moderate depth and clarity to the image and the color reproduction is strong, the black levels are pleasing and the contrast is fine - overall a solid 1080p transfer in the original widescreen aspect ratio. .

Audio options include the choice of English DTS-HD Master Audio 2.0 stereo or 5.1 surround. The surround track is quite nice with a good dynamic range and some good use of the surrounds. The score seems a little high in the mix from time to time and I  found myself adjusting the volume quite a bit throughout - optional English subtitles are provided.

Onto the extras we have a half-hour making of  featurette with new interviews from director Steve Miner, actor Bill Pullman, director of photography Daryn Okada, editor Marshall Harvey, Production Designer John Willett, Effects supervisor Nick Marra and Puppeteer Toby Lindala mixed in with clips from the film, quite a decent watch with lots of production notes and fun anecdotes. My favorite stories are of the foul-mouthed Betty White and the story of the trained bear on-set who spotted the 30 ft. animatronic croc and turned tail -- scared to death of the behemoth -- haha.

We also have a 5-minute vintage featurette, animatronic test footage, trailer and TV spots. A very nice set of features and the disc comes with slip cover and reversible artwork with the option of the original poster art or a new illustration from R.P. "Kung Fu" O'Brien.

Glad to see LAKE PLACID get the Scream Factory treatment with a definitive Blu-ray. Director Steve Miner (HOUSE) crafted a fun piece of popcorn entertainment loaded with gore and some decent suspense plus a ton of sarcastic wit. This is the comfort food of creature features and it hangs quite comfortably with ARACHNOPHOBIA and DEEP BLUE SEA which tread the same water but LAKE PLACID does it way better.