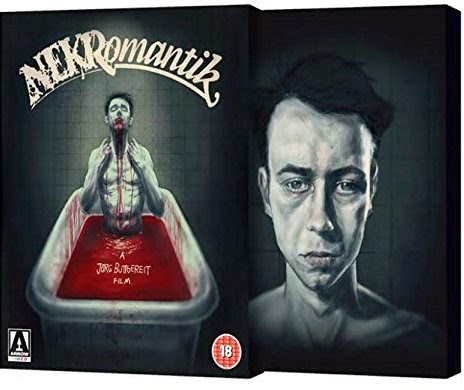 Nekromantik is the story of a strange young man named Rob Schmadtke (Daktari Lorenz) whom is employed at a crime clean-up service. As you can imagine it is quite a grisly job but one that suits the young man, this troubled guy is a necrophile. His employment allows him to collect various body parts from crime scenes which he keeps in specimen jars at his apartment, where both he and his death-obsessed girlfriend Betty (Beatrice M.) can get-off on while touching and stroking the gruesome appendages.

However, when Rob loses his job Betty dumps him and takes the corpse with her, damn, dumped in favor of a corpse. Rob spirals further into the maddening depths of misery with out Betty (and the corpse). pending most of his time in seclusion and contemplating suicide. One evening he attends the cinema before procuring a prostitute to fuck at a nearby graveyard. Seems the tombstones aren't enough to excite the necrophile and he can't get it up, but fear not, he rises to the occasion once he strangles her to death. Sex just isn't the same without the element of death for the depraved necrophiliac.

Afterward he further descends into disparity, back at his apartment he stuffs his pet cat into a trash bag and smashes it repeatedly into a bloody pulp against the wall. Now, bare in mind that the cat is a prop but this scene might send animal lovers for the exit, you know, if the necrophilia didn't already scare you off. Additionally, there's an actual scene of what appears to be an rabbit being bled to death, skinned and gutted. It's not quite CANNIBAL HOLOCAUST but it's unsettling just the same.

Shot on Super 8mm film in 1987 the film has a rough homemade quality about it that won't appeal to your average movie fan, pile that on top of scenes of necrophilia and the death of small animals and you have a film that just doesn't have a lot of appeal to your average horror joe. Buttgereit sets a definite tone right from the start with a shot of a woman urinating on the roadside just before her and a male companion are killed in a horrendous car accident that leaves the woman torn in half, thus setting up the introduction of Rob. The director is pretty much saying you have been warned, stay at your own peril.

There were quite a few repulsive scenes but one of the first to truly affect me was the repeated bare handed handling of the corpses, which made me a bit nauseous. The gore effects are low-budget but pretty fantastic in how grotesque they are. When the necrophiliac lovers start to suck the eye-socket of the cadaver I had to put my damn beer down for a few minutes before it came back up on me. Even all these years later this low-budget shocker carries with it a gut-punch arsenal of disturbing imagery. .

Aside from the licking of body parts and the corpse there a few other effective gore gags including a sweet decapitation scene with spewing blood at he graveyard when Rob is discovered next to the dead whore the next morning. Speaking of spewing we cannot overlook perhaps the most infamous scene in the film - SPOILER ALERT - when Rob completely distraught lies in bed and pulls out his erect cock and begins stabbing himself in the guts repeatedly as thick stream of cum and blood spews from his cock. It's definitely a scene that won't soon be erased from your memory. 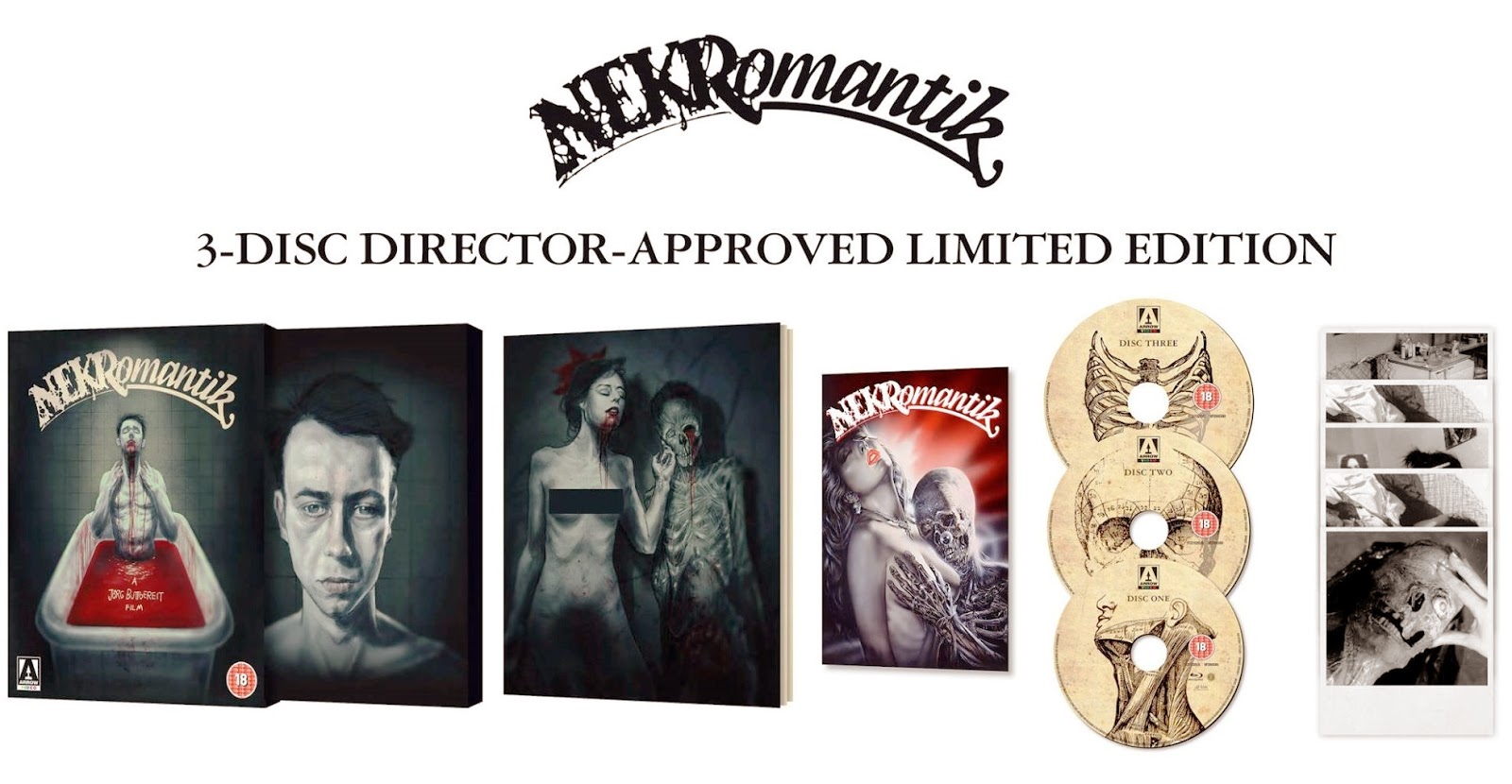 BLU-RAY:
It would appear to be the same HD transfer as the Cult Epics Blu-ray here in the States, it's a lo-fi film made on the cheap and while I didn't go in expecting crystal clarity and oodles of fine detail it was a very flat and dull presentation, that being said it is probably the best the film will ever appear due to the limitations of the source material.

As with the Cult Epics release there are two versions of the film - the 8mm HD transfer and one from a 35mm print which looked like it been around awhile and put through the wringer. Honestly I preferred the 35mm print with the print damage which added a lot of character to the viewing experience..

Both the German LPCM Mono and stereo audio options are flat and unremarkable. Recorded without audio the dialogue was dubbed in giving it a weird disconnected vibe which suits the nightmarish imagery quite nicely. Optional English subtitles are provided.

Onto the features we discover that Arrow have stuffed this one to the proverbial gills with quality bonus content. The disc mirrors all the extras from the Cult Epics Blu-ray minus the Q+A with Jorg Buttgereit at the American Cinematheque from 2013.

The new extras include In Conversation with The Death King - a brand-new 2014 interview with Buttgereit conducted exclusively for this release, plus Morbid Fascination: The Nekromantik Legacy - a brand-new 2014 documentary looking at the impact of the film on the horror scene both in the UK and abroad, featuring interviews with genre critic Alan Jones, Marc Morris, producer of Video Nasties: The Definitive Guide Parts 1+2, and Buttgereit biographer David Kerekes. Additionally we have a Q+A with Buttgereit recorded at Glasgow’s Centre for Contemporary Arts (2014) conducted by Calum Waddell. As if that were not enough we have two music videos directed by Buttgereit including a catchy punker tune by the group Half Girl.

- Director’s introduction to Nekromantik
- Alternative “Grindhouse Version” of Nekromantik, newly-transferred for this release from the only existing 35mm print [Blu-ray only]
-  Short Film Hot Love (1985) (29 minutes)  with audio commentary with Buttgereit
- The Making of Nekromantik – A vintage documentary featuring a wealth of behind-the-scenes footage, newly-transferred in HD and viewable with two different audio tracks: an - English commentary with Buttgereit, co-author Franz Rodenkirchen and David Kerekes, and a German-language audio track featuring radio interviews with Buttgereit, Rodenkirchen and producer Manfred Jelinski
- Nekromantik Featurette – A look back at the film’s production, featuring interviews with Buttgereit and Jelinski, produced for the film’s 10-year anniversary German VHS release
- Nekromantik Premiere – A short featurette comprised of footage from the film’s premiere in Berlin, January 1988
- “Das Letzte” – A short featurette comprising footage from the 1985 premiere of Hot Love
- Complete collection of Buttgereit feature film trailers: Nekromantik, Der Todesking, - Nekromantik 2 and Schramm
- Extensive image gallery including behind-the-scenes stills and the rare, surrealist German-language Nekromantik comic by Berlin artist Fil, reproduced in its entirety

EXCLUSIVE TO THE RELEASE:
- Short Film Horror Heaven with Audio Commentary
- Horror Heaven Outtakes
- Horror Heaven trailer featuring outtakes from the film
- Two Buttgereit-directed music videos: ‘I Can’t Let Go’ by Shock Therapy (1995) and ‘Lemmy, I’m a Feminist’ by Half Girl (2013)
- In Conversation with The Death King – A brand-new 2014 interview with Buttgereit conducted exclusively for this release
- Morbid Fascination: The Nekromantik Legacy – A brand-new 2014 documentary looking at the impact of the film on the horror scene both in the UK and abroad, featuring interviews with genre critic Alan Jones, Marc Morris, producer of Video Nasties: The Definitive Guide Parts 1+2, and Buttgereit biographer David Kerekes
- Q+A with Buttgereit recorded at Glasgow’s Centre for Contemporary Arts (2014)

VERDICT:
NEKROMANTIK (1987) is quite a nasty little delight of lo-fi shock cinema, Buttgereit had a vision and set out to create a film that pushed the boundaries of acceptability and he succeeded on all fronts, nearly thirty years later this is still a hard film to stomach. Arrow's 3-Disc Director Approved Limited Edition is the definitive document, containing all the goodies and grue you crave in one fantastic package.