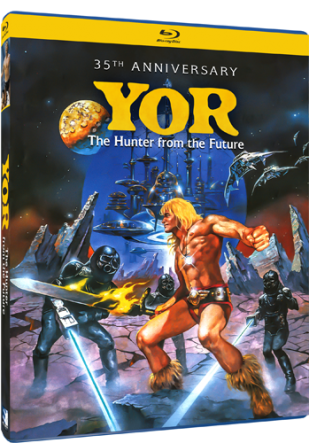 Yor, The Hunter from the Future (1983) offers up some sweet eighties sword and sorcery cheese for fans of that ilk, we have Reb Brown (from the 70's Captain America TV movie) starring as the titular Yor, a bare-chested, blond-maned barbarian-warrior who at the top of the movie is jogging through the pre-historic wasteland to one of the cheesiest  80's theme songs you will ever EVER hear, it's awful stuff. Along the way Yor encounters pretty cave-girl Kala (Corinne Cléry, Lucio Fulci's The Devil's Honey) and her mentor and adopted father  Pag (Luciano Pigozzi, Exterminators of the Year 3000) who are hunting a baby dinosaur (which is obviously a baby pig wrapped in a cheap dino-skin) when they are attacked by the hybrid dinosaur  "stegoceratops", which Yor kills using his trusty stone-ax with a few crushing blows, which were surprisingly bloody! Afterward he drinks the dino's warm blood, offering some to Kala and Pag, saying that drinking the blood of your enemies makes you stronger, Pag humorously refuses the offering.

Yor accompanies his new friends back to their village, enjoying a dino-feast and a seductive dance from Kala, until they gala is interrupted by the arrival of a warring tribe of purple-skinned cavemen who kidnap Kala and take her back to their cave. Yor and Pag track the kidnappers and Yor kills a giant bat, using the creatures leathery wings as an impromptu hang-glider to fly into the cave, afterward flooding the cave killing the purple-skinned enemies along with a few innocent villagers who were being kept prisoners, but he saves his woman so all is good.

Pag and Kala continue to travel with Yor on his aimless adventure, along the way Kala competes for Yor's affections with a blond woman named Tarita (Marina Rocchi) who also has blond hair and wears a similar amulet to that worn by Yor, but she is killed by more purple skinned cavemen, but not before revealing to Yor with her dying breath as to where he can find more of his own kind, a blond haired race of advanced people who live on an island surround by storms.

The trio find the island, discovering the technologically superior  race of blond people led by the tyrant Overlord (John Steiner, Tenebre), here we discover in a fun Planet of the Apes (1968)sort of twist that this is not pre-historic Earth at all, but Earth after a nuclear apocalypse, which begs all sorts of questions, like why are dinosaurs roaming the earth! While the film begins in a standard Beastmaster/Krull sword and sorcery sort of way it becomes a serious Star Wars rip-off with the Overlord, who is sort of in the Ming the Merciless vein, overseeing over an army of Darth Vader-esque looking androids, there's even a scene that lifts large portions of the scene from Star wars with Luke bridging the chasm in the death star with a trapeze twist! The film culminates with the trio aligning  themselves with a group of rebels led by the scientist, Ena (Carole André, The Bloodstained Butterfly)and a blind man known as the Elder. It's all cheesy fun, very low-budget but never less than fun.

The film is helmed by Italian director Antonio Margheriti (The Long Hair of Death) who keeps things lively if lo-fi, the creature effects are decently awful but thoroughly entertaining, the sword and sandals imagery does the job, and having been shot in Turkey the film has some nice locations that add flavor to the sword and sandal sci-fi stew. Actor Reb Brown seems to be having a blast making this one, running around with his loin cloth with a smile plastered on is face, there's a moment after his first dino-kill where he seems so excited, giving out a strange howl that almost seems like he's going to burst out in a victorious song! Corinne Clery is super-sexy, a beauty that holds her own just fine against Reb Brown, not that it would take much, but they make for a decent enough coupling. Luciano Pigozzi as the mentor Pag physically has always has reminded me of director Lucio Fulci, imagining him in this sword and sandal epic brought a smile to my face. As for the dino special effects, they remind me not of Harryhausen but more akin to what we saw with Kevin Connor's  The Land That Time Forgot (1975), and that's not a bad thing!

Audio/Video: Yor, The Hunter from the Future (1983) arrives on Blu-ray from budget-label Mill Creek Entertainment in 1080p HD and framed in 1.78:1 widescreen. Not sure what the source is for the HD Master but I know it's not the 35mm negative, the image is soft and marked with blemishes including white speckling, dirt and debris and the occasional vertical scratch. darker scenes are bogged down in grain and murkiness, it falls short of my modest expectations but is never not watchable. Audio comes by way of an English LPCM 2.0 Stereo track, and it does the job without much fuss. Extras include a theatrical trailer and a new audio commentary from actor Reb Brown who is very candid in his memory of making  the film.

This single-disc Blu-ray release comes housed in a standard Blu-ray keepcase with a one-sided sleeve  of artwork featuring the original U.S. theatrical poster, it also comes with a sweet slipcover (o-card) sporing a gorgeous illustration, which I believe is the European artwork, easily besting the U.S. artwork, looking a bit ike Thundarr the Barbarian with that flaming sword! It's too bad we do not get a reversible sleeve of artwork featuring this, it's a great slipcover with attractive lettering on the spine that makes it stand out when it's on the shelf.

Yor, The Hunter from the Future (1983) is a fun watch, if you have love for 80's sci-fi/sorcery cheese along the lines of Space Hunter and Metal Storm there's bound to be a lot here you will love, and this can be picked-up for under $10 right now.