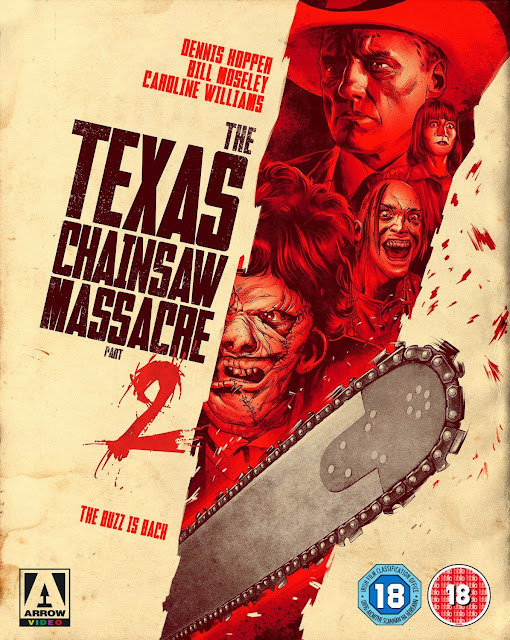 A decade after the original film director Tobe Hooper resurrected the terror classic with an offbeat sequel infused with pitch black humor and outrageous gore gags. Now thirteen years after the events of that fateful night in 1973 the Sawyer clan have traded-in the rural farmhouse for a labyrinthine underground maze beneath a run down amusement park. They're traded in carving-up hippies for eviscerating yuppies and patriarch Drayton Sawyer tours Texas in a lunch truck winning chili competitions. The secret to his prize-winning chili is the prime meat, of course!

As the adventure begins a pair of douche-nozzle yuppies are en route to Dallas for a weekend of debauchery when a pickup truck pulls up next to them, they're stunned when Leatherface wielding a chainsaw attacks the car while puppeteering a desiccated corpse. Were already off to a phenomenal start  with the opening scene setting the pace with black humor and terrific gore gags as the driver loses half his face to the saw.

As it turns out the yuppies were live on-air with a local radio DJ named Stretch (Caroline Williams) during the encounter and the horrifying incident was caught on audio tape.  A former Texas Ranger named Lefty (Dennis Hopper, Mad Dog Morgan) arrives on scene to investigate the bizarre deaths. Lefty's the uncle of Sally and Franklin from the first movie and he's on a quest to avenge their deaths. The audio recording comes to his attention and the Ranger doesn't so much team-up with the DJ as use her as bait to attract the attention of the sadistic cannibals by having her replay the broadcast on air. Fearing the tape will lead to their discovery Leatherface and his 'Nam obsessed brother Chop Top (Bill Moseley) arrive at the radio station and terrorize the DJ who's clearly in over her head.

Leatherface's dead-skin mask in this film may just be my favorite incarnation of the chainsaw wielding maniac. Chop Top is one of my favorite characters from any movie, a bizarre skittish nut who picks away at his scalp with bent coat hanger before eating the tasty bits of flesh. He's one of the most quotable characters in any horror film and after Otis from The Devil's Rejects is one of Moseley's most iconic creations onscreen, definitely a signature performance. You cannot watch this movie and not appreciate the demented performance Jim Siedow as the demented Drayton Sawyer, the cantankerous and eccentric patriarch of the flesh eating clan, his dialogue and delivery are creepily side-splitting and he perfectly embodies the tone and spirit of the production.

At the station Leatherface and Chop Top terrorize Stretch and when her producer L.G. returns to the station he gets a hammer to the skull after discovering Chop Top raining the vinyl archives. Somehow Stretch is able to use her charm coerce the love-struck Leatherface into letting her live and soon the duo leave with L.G. corpse in their pickup.Lefty and Stretch follow them to their underground lair beneath a condemned amusement park and what they find is a nightmare carnival of macabre weirdness.

Dennis Hopper was fresh off David Lynch's Blue Velvet and his character here is just as unhinged and strange as Frank, or maybe at this time Hopper was just a nut in every movie, this was the same year as Rivers Edge. Obsessed with revenging the death of his nephew Lefty enters the underground lair with no less than three chainsaw at his disposal - prepare yourself for the glory of dueling chainsaws! Hats off to the production designers for the surreal atmosphere and lighting of these underground sets, it definitely creates a tone.

The film has received criticism for straying so far from the original in terms of tone and pitch but I love this damn thing to death. It's straight-up demented from start to finish with my favorite sequence being the assault on the radio station as they torment Stretch. You wanna see strange, how about Leatherface mock-fucking her with his chainsaw spraying a slurry of shaved ice and Big Red soda cover her, a surreal sexual nightmare. Caroline Williams (Contracted) screams her damn head off throughout this nutty film, one of the most memorable scream queen performances in my opinion. Hooper re enacts the infamous dinner scene from the first film here and it's a nightmare scenario that's more effective and creepy than the original in my opinion.

While the first original is a notoriously bloodless shocker the sequel  is dripping with grue thanks to the gore-master Tom Savini and his crew. When L.G. is brought back to the Sawyer kitchen they flay the skin from his legs and chest with an electric carving knife before peeling off his face and placing the dead-skin mask onto a hysterical Stretch. It's an over-the-top sequel that just layers on the excess and over-acting and I love it for it. My only objections with the movie are some pacing issues and a weak score but they make up for it with the inclusion of The Cramps classic "Goo Goo Muck".

Blu-ray: Arrow's treatment of Tobe Hooper's satirical sequel to the original gets nothing less that the deluxe treatment using the same HD master supervised by cinematographer Richard Kooris with some additional restoration to remove additional dirt and debris giving this edition a very slight bump over the MGM Blu-ray. The colors are strong with some nice contrast levels and a nice layer of film grain which during some scenes is quite coarse to be honest but I love it. All the gory bits look fantastic with the hi-def bumbp.

Audio chores are handled with an very capable English LPCM Stereo track with optional English SDH subtitles. There's some nice depth to the crisp stereo presentation - the uncompressed audio really punches it up a bit.

Arrow's release carries over all the MGM extras with a host of  new supplements courtesy of Red Shirt Pictures, High Rising Productions and Nucleus Films. Carry overs begin with two audio commentaries, the first from director Tobe Hooper moderated by David Gregory and a second commentary with stars Bill Moseley, Caroline Williams and special-effects legend Tom Savini, moderated by Michael Felsher of Red Shirt Pictures. Also ported from the previous Blu-ray is the definitive retrospective doc It Runs in the Family and the alternate opening sequence and deleted scenes - one featuring Joe Bob Briggs from MonsterVision and some of Tom Savini's excised gore effects!

Exclusive to Arrow's edition are the Still Feelin’ the Buzz video interview with horror expert Stephen Thrower produced by Nucleus Films. The noted author who speaks for about a half-hour on the challenges Hooper faced in making a sequel to what he considers a near perfect film and pointing out the changes in tone and hyper-reality of the sequel.

Another new extras Cutting Moment with Bob Elmore is a video interview with The Texas Chainsaw Massacre 2 stuntman Bob Elmore who played Leatherface in the sequelas he recounts what appears to have been a grueling experience lugging around a seventy-five pound chainsaw in the Texas heat,

A second disc features two early film the director, we have silent comedy The Heisters (1964) and his debut feature film Eggshells (1969), a weird hippie-centric slice of art house student film making. Eggshells benefits from an audio commentary from the director and Louis Black. I cannot say I loved either of these but they are available for the first-time on home video ever and I do appreciate the inclusion as they're both interesting glimpses into Hooper's pre-TCM career.  Additionally there's a 20 plus minute interview with Hooper conducted by High Rising Production's Calum Waddell with the director looking back on his career, plus a

Verdict: A demented sequel that dares to stray from the formula and one of my favorite horror comedies of all-time.  Arrow's audio/video presentation and extensive extras make this the definitive edition of the gore-comedy classic - a must own for serious collectors.
Posted by Ken at 7:22 PM