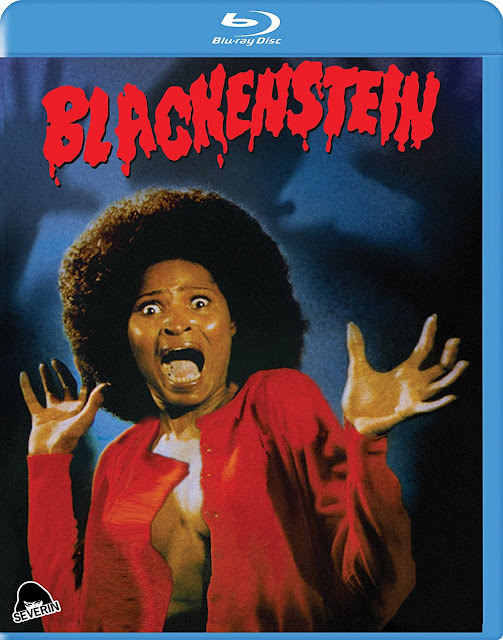 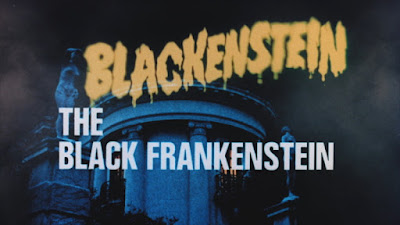 In this 70's both hideous and awesomely titled  blaxploitation/horror hybrid we have an African-American Viet Nam vet named  Eddie Turner (Joe De Sue) who has lost his limbs after stepping on a landmine, his foxy physicist fiancée Doctor Winifred Walker (Ivory Stone) seeks the help of her former mentor Doctor Stein (John Hart), a Nobel Prize winning genetic scientist who has had success with reattaching limbs using a proprietary "DNA solution", though even a cursory tour of his clinic reveals some minor setbacks in the process, such as tiger-striping on a patients lower leg, which has been reattached using some bizarre laser sorcery in conjunction with the DNA solution. 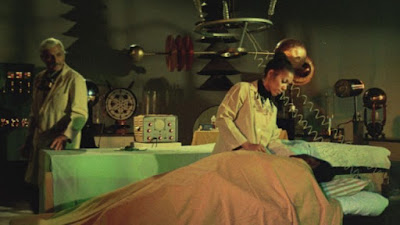 Winifred checks her man out of the Veteran's hospital where he's been secretly abused by a clearly racist orderly, and places him in Dr. Stein's care at his clinic, but the doc's own conniving orderly Malcomb (Roosevelt Jackson) sabotages Eddie's experimental surgery after having his affections for Winifred denied, with bad man Malcomb tampering with Eddie's personalized DNA solution, causing him to regress into a speechless, hulking square-afro'd monster who stalks the streets at night looking for flesh to consume, more a brutish flesh-eating zombie than the black-Frankenstein monster the movie advertised. One of his first victims is that racist orderly at the veteran's hospital, then onto other patients at the clinic, including an age-defying woman played by Liz Renay (John Water's Desperate Living), and of course he has to get his hairy caveman hands on the rape-y Malcomb! The film culminates with Wini and the doc facing off against Eddie's monster with poor expressionless Eddie being torn apart by a pack of police Dobermans.

One of my favorite tidbits about this movie is how by day Eddie is bedridden and listless at the clinic, but by night he magically transforms from his hospital gown into a black turtleneck and blazer combo wearing monster, sort of the same way that Bruce Banner transforms into the Hulk, somehow always wearing the same torn, purple pants. 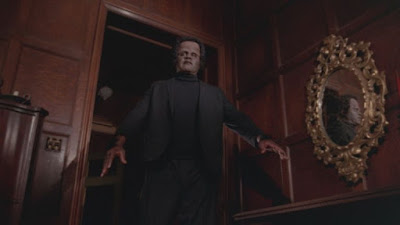 The 70's Blaxploitation cycle offered a few fun horror hybrids, from AIP's truly great Blacula (1972)to the not-so-good but totally-fun Exorcist knock-off Abby (1973) and the Bernie Casey (Gargoyles) vehicle Dr. Black, Mr. Hyde (1976), but Blackenstein (1973) is a much trashier and poorer made film than any of those, but it does have some bloody gore and cool vintage laboratory sets that were originally used in Universal's Frankenstein! The ramshackle affair is very poorly acted, Joe De Sue is lifeless in the role, long before he becomes the lumbering monster, he's certainly no William Marshall (Blacula) and does nothing to bring the creature to life, appearing emotionless and blank for the duration of the film, he doesn't bring any pathos to the character. The cast surrounding him are not much better, but I did find Ivory Stone to be a decent female lead, not great but a foxy lady with a good set of lungs when called upon. 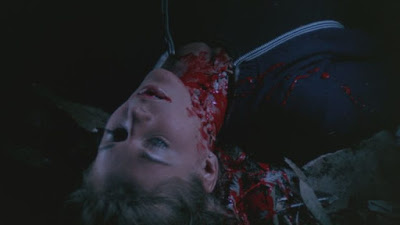 Audio/Video: Blackenstein arrives on Blu-ray from Severin Films who teamed-up with Vinegar Syndrome and Xenon Pictures to bring you this greasy 70's slice of horror-themed blaxploitation, framed in 1.78:1 widescreen. We get two versions of the movie, the shorter 78-min theatrical cut (sourced from film elements) and the longer 87-min video version. The video version is also sourced from film elements, in addition to some inferior 1" master tape inserts that are of much lesser quality than the theatrical version. The theatrical version itself has some serious issues by way of fading, print damage, softness and poor black levels that are inherent to the source, and while it ain't a pretty sight I can safely say that it's the best this Afrocentric horror hybrid has ever looked on home video.

Audio comes by way of an English mono DTS-HD MA track with optional English subtitles (on the theatrical version only), and as with the image the audio has inherent issues, we get some minor distortion and hissing, the dialogue and library music cues sound pretty canned at times, but it's serviceable. The highlight would be a few soulful songs from actress Cardella Di Milo (Dolemite) that appear on the soundtrack.

Onto the extras, we get the aforementioned two versions of the film, plus an interview with the late produce Frank R. Saletri's sister June Kirk who discusses her brother's life and death, he was a criminal lawyer and b-movie movie producer, his love of classic horror and what a character he was, she gets a bit misty eyed when recalling his still unsolved murder in '82, found shot to death execution style in his Hollywood home. One of the extras is a bit of true-crime, a 6-min vintage news broadcast on the murder of Saletri featuring images from his movies and his home. 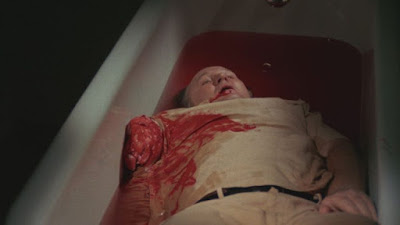 Creature Designer Bill Munns appears in an audio interview and discusses crafting the square-afro'd monster for the film, using the make-up on Universal's original done my Jack Pierce as his inspiration. Severin also offer up some outtakes from their forthcoming Al Adamson doc with actor-producer-director's Ken Osborne and Robert Dix, recalling the producer's love of film making and even offering some theories on why he was murdered. The extras are all Saletri-centric, the man's life and mysterious death are infinitely more interesting than the movie he produced, one would hope we get an Ed Wood style film about him at some point.  The single-disc Blu-ray release comes housed in a standard Blu-ray keepcase with a sleeve of one-sided artwork featuring the original poster artwork, the disc itself featuring the same image reversed. 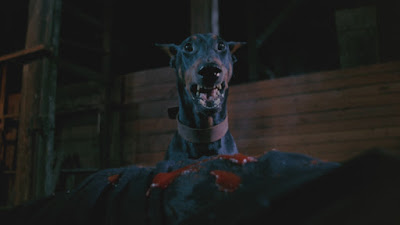 Blackenstein (1973) is a dopey re-imagining of the classic Frankenstein story, it's poorly written, acted even worse, and ineptly executed on all artistic/technical levels, and that's where there's a certain bad movie charm, it's absolutely the worst of the blaxploitation/ horror hybrids I've seen so far. However, for bad movie fans it's great to see two cuts of the film, though the longer version in no way makes it a better film, I prefer the theatrical cut. This is definitely a case of a movie that is so bad that the making of and anecdotal stories surrounding are vastly more enjoyable then what ended up onscreen, so I give Severin a lot of respect for giving Bkackenstein as impressive a Blu-ray debut as I could have hoped for, if you're fan this title this release is trash-cinema nirvana.