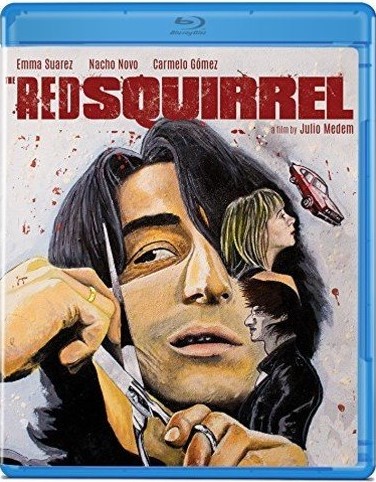 The second feature from director Julio Medem (Sex and Lucia), The Red Squirrel (1993), opens with a washed-up musician named Jota (Noncho Novo) standing on a  bridge peering down at the waves crashing on the rocks, he's heartbroken after a recent break-up and is contemplating suicide. When it seems he's about to make the fatal leap a motorcycle comes along and crashes into the rail along the boardwalk sending the bike and it's rider over the edge and crashing onto the sandy beach below. Distracted from his suicidal thoughts Jota rushes to the aid of the biker and discovers the rider is an attractive young woman (Emma Suarez, Vacas), she's conscious and able to speak but has seemingly lost her memory in the accident.

As paramedics arrive on the scene Jota imaginatively creates a new identity for the woman, naming her Lisa after one of his former band's The Flies songs, and escorting her to the hospital where he spins a fictitious history about the woman to the hospital staff and to the woman herself who remembers nothing, informing her that they live together, even planting a deep kiss on her lips. The hospital psychiatrist diagnoses her with a rare case of amnesia, but when the doc begins to show suspicion towards Jota he steals her away from the clinic and they immediately embark on a trip to 'Ardilla Roja' campgrounds, a trip he tells her they have been planning for quite sometime, all the while not suspecting that her crazy ex-boyfriend, Félix (Carmelo Gómez, Nos Miran) has been looking for her, eventually tracking her down to the campgrounds where a bizarre face-shredding confrontation ensues.

The Red Squirrel is a surreal romantic fantasy, the Spanish language film has some wonderfully imaginative cinematography, including shots from the point of view of a squirrel darting around the forest floor and scrambling through the branches of trees, there's even a music video for Jota's former band which shows up unannounced. The whole film has a nice dreamy quality, with swirls of apprehension and the suggestion of darker themes, for example, I wasn't quite sure what Jota's true motives were, here we have a suicidal man who happens upon an accident and manufactures an instant girlfriend in a moment of strange opportunity. Early on I was worried the poor woman had just accidentally inherited the ultimate stalker during a moment of crisis, and despite that not exactly being the case you cannot deny that Jota's motivations are suspect.

Jota is a bit of a brooding mystery, but Emma Suarez is wonderful and charming as the amnesiac love interest, we discover her real name is Sophia and she's quite an enigma herself, with the possibility that her amnesia is not quite as memory erasing as we've been lead to believe, causing her own motivations for going along with the instant-relationship to be suspect. The movie's quirky love story dreamily juggles issues of identity and trust, also mixing in some late-in-the-game menace and violence with a shocking moment of mutilation.

Audio/Video: The Red Squirrel (1993) arrives on Blu-ray from distributor Olive Films, a region A locked disc with a 1080p HD transfer of the film framed in 1.66:1 widescreen. The source looks solid with only some white speckling to show for wear. The image at times is a bit soft, which looks to be more a stylistic choice by the cinematographer than a transfer related issue, in that context the colors are vivid and look accurate. The lone audio option is Spanish DTS-HD MA Stereo 2.0 with optional English subtitles, everthing is nicely managed and mixed for the stereo presentation, including the Alberto Iglesias (The Skin I Live In) score.

This is a barebones releases, no extras. This single-disc release comes housed in standard Blu-ray keepcase with a one-sided sleeve of artwork, the disc itself features a plain Looking pink background with red lettering.

This surreal Spanish psychological romantic-thriller brought me right back tot he early 90's when I was discovering foreign and independent cinema for the first time, stuff like Mediterraneo (1991), Toto Le Hero (1991), Delicatessen (1991) and Like Water For Chocolate (1992), this would have fit quite comfortable amidst those 90's discoveries during it's initial run at the arthouse but somehow it has eluded me for all these years. Watching it now was a real treat, looking forward to checking out more from director Julio Medem, I already have his debut film Vacas (1992) on tap to watch next, a film that's also been released this month by Olive Films on Blu-ray.