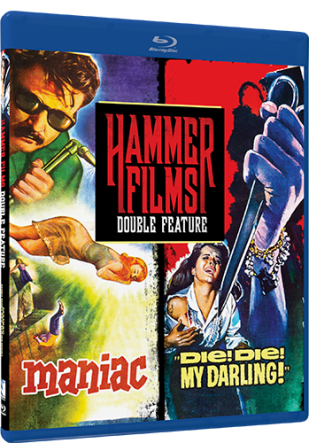 MANIAC (1963)
Hammer's black and white thriller Maniac (1963) is set in the South of France, opening with a young woman named Annette (Liliane Brousse) accepting a ride home from school from a creepy landscaper who proceeds to drive her to a secluded area where he rapes her. When the girl's father discovers this he kidnaps the man, torturing and then murdering the rapist with an acetylene torch. In the aftermath the father is sent away to the asylum for the criminally insane, but is regarded as something of a local hero for his act of vengeance against his daughter's rapist.

Months later an American painter named Geoffrey Farrell (Kerwin Mathews, The Boy Who Cried Werewolf) arrives in the area and stays at a small hotel run by the young girl's step mother Eve Beynat (Nadia Gray, La Dolce Vita). Geoffrey initially is charmed by her teen daughter Annette, but the flirtation is frowned upon by Eve, who intercedes and before you know it Geoffrey and Eve are involved in a passionate and very physical relationship, which was weird, moving on from the teen daughter to mother happened real quick. Eve involves her new love in a plot to free her homicidal husband from the asylum, and what transpires from there is a twisty, sexed-up thriller that I could not have predicted the outcome of, this thing has several hairpin turns that will absolutely disorient you with it's labyrinthine of deceit! 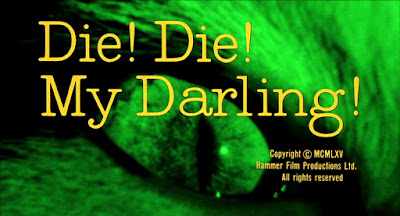 DIE! DIE! MY DARLING! (1965)
Hammer's first color film was this matriarchal nightmare, Die! Die! My Darling! (aka Fanatic in the UK) starring Tallulah Bankhead (Lifeboat) as religious zealot Mrs. Trefoile, a decrepit old woman who is visited upon one day by Patricia Carroll (Stephanie Powers, Experiment in Terror) - the one time fiance of her now dead son, he having apparently perished in a fatal car accident. Bankhead really seems to be channeling Bettie Davis in a hag-horror role that chews-up the scenery with maniacal lunacy, blaming Patricia for taking her son away from her, chastising her for wearing the devil's color (red), and wearing lipstick (gasp!). When she finds out that Patricia plans to marry another man she locks her away in a room, hoping to make her repent her sinful ways, to purify her and mend her wicked ways. Mrs. Trefoile is assisted in her religious zealotry by a husband/wife servant duo, the lecherous Harry (Peter Vaughn, Straw Dogs) and dutiful Anna (Yootha Joyce, Fragment of Fear), plus a dim-witted gardener played by a very young, and under utilized, Donald Sutherland (Invasion of the Body Snatchers). 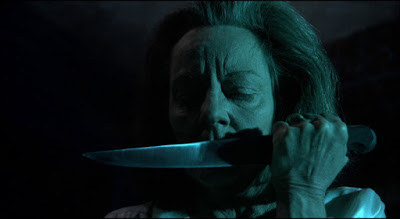 This was such a fun movie, very campy in a later-era Bettie Davis/Whatever Happened to Baby Jane? sort of way, with the wicked old woman starving poor Patricia, along the way her servant Anna regularly lays hands upon her, even stabbing her at one point with a pair of scissors, providing some of that precious, patented red-paint Hammer blood. If you love campy hag-horror this one has it in spades as the puritanical lunatic attempts to brainwash/purify the 60's-era liberated young woman.

Audio/Video: Mill Creek Entertainment bring both Maniac (1963) and Die! Die! My Darling! (1965) to single-disc Blu-ray as a double feature.Maniac is framed in the scope widescreen (2.35:1) aspect ratio, the wide lensed black and white cinematography looks great, capturing the coastal French location nicely with a good looking grain structure, fine detail is plentiful and the contrast and shadow detail is very pleasing. Audio comes by way of a clean and crisp English LPCM Mono 2.0 track, dialogue and the jazzy score from Stanley Black (The Flesh and the Fiends) sound terrific, optional English subtitles.  Die! Die! My Darling! (1963) is presented in 1080p HD widescreen (1.85:1). The image is crisp and clean, the source looks fantastic, colors are rich and textured, there's some nice use of Mario Bava-esque lighting in some attic scenes that absolutely glow/pop-off the screen. Grain is nicely managed and fine detail is abundant, with only some minor white speckling to note as far as blemishes. Audio comes by way of an English LPCM 2.0 Mono track, it's well-balanced, the dialogue and Gothic score from Wilfred Josephs (The Deadly Bees) comes through naturally without any distortion, optional English subtitles are provided. I would think these are sourced from the same Sony masters used by Indicator for their Hammer: Fear Warning Vol. 1, they look great with only some very minor age related wear.

This double-feature is highly recommended to fans of Hammer's non-horror thrillers - both of these are great watches, but if you want all the bells and whistles I cannot recommend Powerhouse Films release of Hammer Vol.1: Fear Warning! enough, it has both of these films along with The Gorgon (1964) and The Curse of the Mummy's Tomb (1964) with loads of extras and deluxe packaging, but if you're more of a casual fan just looking for the films with good A/V this release from Mill Creek should do the trick!