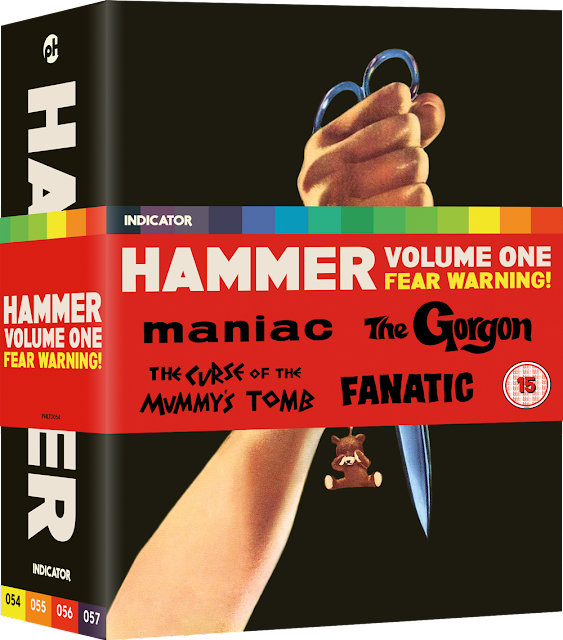 Four classics from Hammer, each presented on Blu-ray for the very first time in the UK. Whether it's a mad man brandishing a welding torch, a mythical monster who's looks can kill, an ancient royal with diabolical powers, or a mad woman wielding a pair of scissors, this set has something to unease everybody. Containing a wealth of new and exclusive extra features – including title-specific documentaries, cast and crew interviews, expert appreciations, introductions and more – this stunning Blu-ray-only Limited Edition box set is published in a horribly limited, numbered edition of 6,000 units. 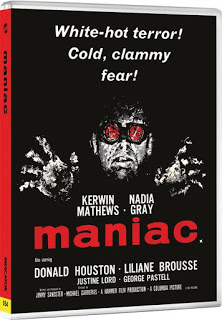 Hammer's black and white thriller Maniac (1963) is set in the South of France, opening with a young woman named Annette (Liliane Brousse) accepting a ride home from school from a landscaper, who drives her to a remote area and rapes her. When the girl's father discovers this he kidnaps the man and tortures/murders the rapist with an acetylene torch. In the aftermath the father is sent away to the asylum for the criminally insane, but is regarded as something of a local hero for his act of vengeance.

Enter into the picture an American painter named Geoffrey Farrell (Kerwin Mathews, The Boy Who Cried Werewolf) who ends up at a small hotel run by the young girl's step mother Eve Beynat (Nadia Gray, La Dolce Vita). Geoffrey initially is charmed by the teen aged Annette, but the flirtation is frowned upon by Eve, who intercedes and before you know it Geoffrey and Eve are involved in a passionate physical relationship, which was weird, moving on from the daughter to mother happened real quick. Eve involves her new love in a plot to free her homicidal husband from the asylum, and what transpires from there is a twisty, sexed-up thriller that I could not have predicted the outcome of, this thing has several hairpin turns that will absolutely disorient you with it's labyrinthine of deceit!

Audio/Video: Maniac (1963) arrives on Blu-ray from Powerhouse Films as part of their Indicator Series, framed in the scope widescreen (2.35:1) aspect ratio. The wide lensed black and white cinematography looks great, capturing the coastal French location nicely with a good looking grain structure, fine detail is plentiful and the contrast and shadow detail is very pleasing. Audio comes by way of a clean and crisp English LPCM Mono 1.0 track, dialogue and the jazzy score from Stanley Black (The Flesh and the Fiends) sound terrific, optional English subtitles.

Onto the extras we have a 11-min retrospective with  cultural historian John J. Johnson and author Jonathan Rigby, plus a Hammer's Women feature with horror film expert Lindsay Anne who gives an appreciation of star Nadia Gray. Focus Puller Trevor Wrenn and Clapper Loader Ray Andrew show up for a recollection of working on the film, including working in the asbestos mines for the final scenes, and how the clapper boy had the youthful foolishness to walk up to the director and suggest how the film should end - and they used it! There's also some discussion of the lively after-hours entertainment during the shoot. Additionally we get the theatrical trailer, a gallery of on-set images, and a collector's booklet with new essay by writer Kim Newman, 1978 interview extract with director Michael Cerreras from House of Hammer magazine, memoir extract from writer/producer Jimmy Sangeter's memoir, contemporary reviews, historic articles, and full film credits. 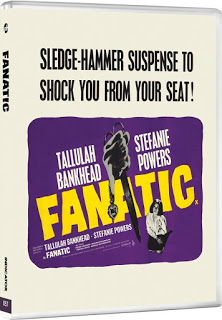 Hammer's first color film was this matriarchal nightmare, also known as Die! Die! My Darling! in the U.S., starring Tallulah Bankhead (Lifeboat)as religious zealot Mrs. Trefoile, a decrepit woman who is visited upon one day by Patricia Carroll (Stephanie Powers, Experiment in Terror) - the one time fiance of her now dead son, he having apparently perished in a fatal car accident. Bankhead is channeling Bettie Davis in a hag-horror role chewing-up the scenery with maniacal lunacy, blaming Patricia for taking her son away from her, chastising her for wearing the devil's color (red), and wearing lipstick. When she finds out that Patricia plans to marry another man she locks her away in a room, hoping to make her repent, to purify her and mend her wicked ways. Mrs. Trefoile is assisted in her religious zealotry by a husband/wife servant duo, the lecherous Harry (Peter Vaughn, Straw Dogs) and dutiful Anna (Yootha Joyce, Fragment of Fear), plus a dim-witted gardener played by a very young, and under utilized, Donald Sutherland (Invasion of the Body Snatchers). 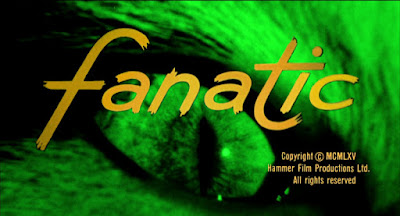 This was such a fun movie, very campy in a later-era Bettie Davis/Whatever Happened to Baby Jane? sort of way, with the wicked old woman starving poor Patricia, along the way while her servant Anna regularly lays hands upon her, even stabbing her at one point with a pair of scissors, providing some of that precious, patented red-paint Hammer blood. If you love campy hag-horror this one has it in spades as the puritanical lunatic attempts to brainwash/purify the 60's-era liberated young woman. 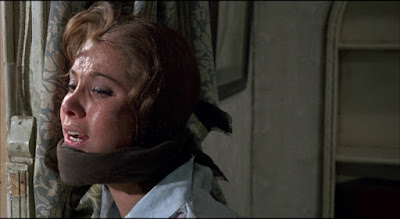 Audio/Video: Fanatic (1963) arrives on Blu-ray from Powerhouse Films as part of their Indicator series, presented in 1080p HD widescreen (1.85:1). The image is crisp and clean, the source looks fantastic, colors are rich and textured, there's some nice use of Mario Bava-esque lighting in some attic scenes that absolutely glow/pop-off the screen. Grain is nicely managed and fine detail is abundant, with only some minor white speckling to note as far as blemishes. Audio comes by way of an English LPCM 1.0 Mono track, it's well-balanced, the dialogue and Gothic score from Wilfred Josephs (The Deadly Bees) comes through naturally without any distortion, optional English subtitles are provided. 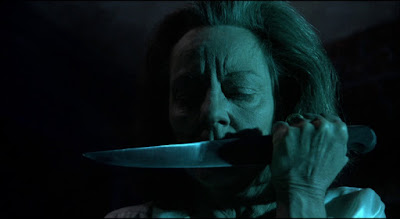 Extras include a 14-min retrospective with cultural historian John J. Johnson and author Jonathan Rigby, another Hammer's Women focusing on Tallulah Bankhead with Kat Ellinger, and oh boy did she lead a wild and unapologetic life! There's also an appreciation of composer Wilfred Josephs, and both continuity supervisor Renée Glynne and second assistant director Stuart Black recall the making of Fanatic, plus the option to watch the film with the alternate Die! Die! My Darling! US title sequence, original theatrical trailer, image gallery and a booklet. 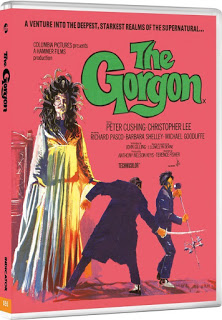 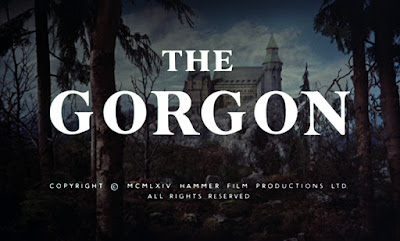 Back into the realm of Gothic Hammer horror
we have The Gorgon (1964) directed by Hammer veteran Terence Fisher (Dracula: Prince of Darkness) and set in the German village of Vandorf in 1910. We have a series of unsolved murders in the village, each occurring on the night of a full moon. Paul Heitz (Richard Pasco, Rasputin: The Mad Monk) arrives in the village after his younger brother is found dead, his body strangely turned to stone. Meanwhile Dr. Namaroff (horror great Peter Cushing, Corruption) is falsifying the death certificates to obscure the truth behind the strange deaths. Heitz calls in friend Professor Karl Meister (the other horror great Christopher Lee, Horror Express) to help him get to the bottom of things. Meanwhile Heitz begins to form a romantic relationship with nurse Carla (Barbara Shelley, Village of the Damned) and discovers that the spirit of a fabled snake-haired Gorgon sister may be haunting the nearby castle ruins. The Gorgon is laced with vintage Gothic fashion and set dressing, dripping with atmosphere and creepiness, but all is nearly undone when the final scene reveals the snake-haired Megaera. which to be nice I will say is a bit on the cheap side, but thankfully it doesn't undo the movie, this is good stuff and worth a watch! 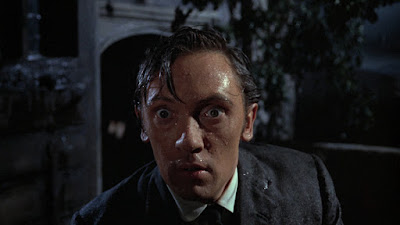 Audio/Video: The Gorgon (1964) arrives on Blu-ray from Powerhouse Films as part of their Indicator series, presented in 1080p HD widescreen (1.66:1). I own this on a double-feature Blu-ray from Mill Creek, and I am here to tell you this wipes the floor with that release. We have more image information, the colors are more saturated and warmer, the grain is better resolved and fine detail and clarity are improved.  As where ill Creek went with their usual lossy audio Indicator gives us a more robust English LPCM Mono 1.0 track with optional English subtitles. 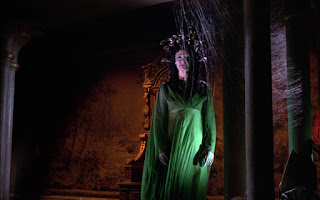 Again Powerhouse/Indicator go all out with the extra, beginning with a commentary from Samm Deighan and Kat Ellinger, an appreciation of Barbara Shelley by Patricia MacCormack, an appreciation of the film by actor and filmmaker Matthew Holness, a trailer, promotional images, and the 1977 comic-strip adaptation from House of Hammer magazine, plus the retrospective with cultural historian John J. Johnson and author Jonathan Rigby. We also get a booklet with new essay by writer Marcus Hearn, 1977 Hammer magazine interview with director Terrence Fisher and Barbara Shelley, 2010 interview extracts from interview with Barbara Shelley, contemporary reviews, historic articles, and full film credits. 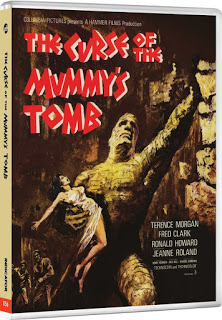 The Curse of the Mummy's Tomb (1964) has a pretty typical set-up for a mummy movie, an American showman Alexander King (Fred Clark, Sunset Boulevard) unearths a tomb of a disgraced Pharaoh. He plans to take it on the road as a way to print money, he steadfastly refuses to allow the discovery to be whisked away to some dusty old museum, and he makes a few enemies because of his entrepreneurial ways. As expected they open the sarcophagus at some point and the mummified Pharaoh is nowhere to be found, but soon those who have done wrong by the ancient Pharaoh are found dead and the lurching creature starts making quite a mess of things.

I didn't find this to be the most pulse pounding of the Hammer entries on this set, it's a pale bandage-wrapped shadow of the Terrence Fisher classic The Mummy (1959) starring Christopher Lee, who was by far a more threatening mass of moldy bandages, it doesn't help that the bandaged bundle here is portrayed by a lumbering stuntman and not an actor, but this one has some opulent Egyptian set pieces, the Pharaoh's tomb looks fantastic, but this is still a bit on the slow side, thank goodness for Freddie King who does a fantastic job as the fast-talking PT Barnum type American Showman.

Audio/Video: The Curse of the Mummy's Tomb (1964) arrives on Blu-ray from Powerhouse Films as part of their Indicator series, presented in 1080p HD widescreen (2.35:1). As with The Gorgon I own this on a double-feature Blu-ray from Mill Creek, and again Indicator destroy that other version,the colors look renewed when compared to the washed-out US edition, colors are more vivid and robust, side by side this is a striking improvement. Again Indicator go with an English LPCM Mono 1.0 audio track with optional English subtitles.

Onto the extras we have another look at the film with cultural historian John J. Johnson and author Jonathan Rigby, one of them pointing out an anachronism concerning Turkish delight, plus an appreciation of actress Jeanne Roland by Diabolique magazine’s Kat Ellinger. Actor  Michael McStay shows up for a brief interview, discussing his role as the Pharaoh, how when told to just make up lines of the silent scene he spoke about an upcoming Manchester United match, and how that translated into complaints from deaf members of the audience who read his lips, and nearly faintng when his prosthetic hand was chopped off. Composer Carlo Martelli also appears, discussing others composers music used for the opening credits and the belly dancing scenes, and what he contributed.

We also get a seven-minute super 8 version of the film, full-frame and silent, very rough looking but a cool addition just the same. Finishing up the disc we have a trailer for the film, an image gallery, and a booklet new essay by Kat Ellinger, contemporary reviews, historic articles, full film credits, and notes about the A/V presentation.

For some reason the Hammer Films releases do not get a ton of love from US distributors, occasionally we get something special, but the majority of the releases are lackluster and bare bones. Thankfully UK distributor Powerhouse Films have stepped-up to the plate with this phenomenal (region-free) 4-disc edition with lavish A/V presentation and a wealth of extras that will take hours to pour through, this is a phenomenal release, highly recommended for Hammer horror fans.