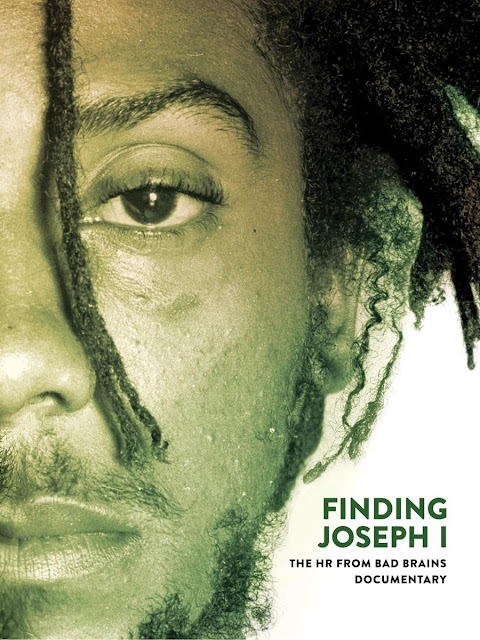 FINDING JOSEPH I: THE HR FROM BAD BRAINS DOCUMENTARY (2016)

Synopsis: "Finding Joseph I" is a documentary film chronicling the eccentric life of punk rock reggae singer, Paul "HR" Hudson from Bad Brains. The charismatic frontman's explosive live performances helped pioneer hardcore punk while delivering an enlightening message of positive mental attitude. HR's heavy devotion to the Rastafarian faith guided him in a spiritual direction leaving the band several times to explore his love for reggae music. Over the years HR's increasingly unpredictable and abnormal behavior has many convinced that he his suffering from mental illness. Finding Joseph I illustrates the true story behind the legendary lead singers life, career and struggles with never before seen archival footage, photography and exclusive interviews.

Seminal punk/hardcore band Bad Brains were brought to my attention in the late 80's thanks to my late and sorely missed friend Derek who gave me a cassette of the I against I album, and it was love at first listen, soon I was playing catch-up and purchasing their whole discography, and while I was a BB fan I didn't catch them live until they played the DPC here in Tucson with the Deftones n the mid-nineties, a great show, but a tour which crash and burned not long after when HR went after a kid in the crowd with a mic stand - and that's about the end of the Bad Brains story for me. For years since I had no idea what had happened to HR or the band honestly, so this doc was a nice history lesson of the band in a way, documenting HR's childhood, growing up and him and brother Earl founding the Bad Brains after being exposed to the snotty punk rock of the Dead Boys.

The doc features archival video of HR's life, raw band performances  and is peppered with interviews from H.R.'s brother/bandmate Earl Hudson, Bad Brains manager Anthony Countey, Ian MacKaye of Fugazi, Chino Moreno of Deftones, Vernon Reid of Living Color, John Jospeh of Cro-Mags, Duff McKagan of Guns N' Roses, Angrlo Moore of Fishbone, all speaking about their love of the music and HR's electric persona onstage, and spiritual convictions, and the tumultuous rise and fall of Bad Brain, including interviews with HR himself, I particularly enjoyed the band's manager relating stories of how H.R. made life difficult for himself and the band, oftentimes hindering the bands career with his erratic behaviors.

The doc is a downer as it covers HR's struggles, leaving him seemingly homeless at times, possibly struggling with schizophrenia and audio hallucinations, drug use is hinted at, and his unpredictable behavior limiting the success of his band, later distancing himself from the punk rock of the Bad Brains and moving towards a more reggae influenced direction with the H.R. band in later years. The mellower jah-love inspired music didn't seem to  have a calming effect on the man though, outbursts of paranoia and violence followed him, leading up to the questions of mental health and eventual treatment, though ending on a promising note.