NOT QUITE HOLLYWOOD: THE WILD, UNTOLD STORY OF OZPLOITATION! (2008) (Umbrella Blu-ray Review) 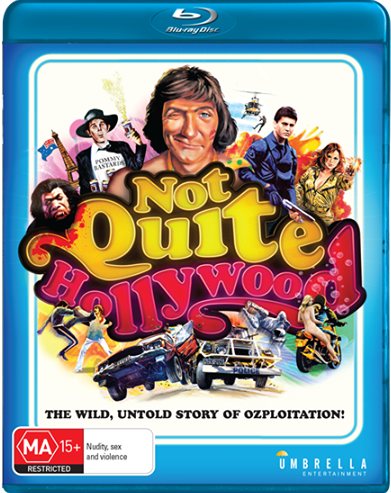 NOT QUITE HOLLYWOOD:
THE WILD, UNTOLD STORY OF OZPLOITATION! (2008)

Synopsis: Welcome to Not Quite Hollywood, the fast and furious story of OZploitation - an eye-popping celebration of Australian cult films of the '70s and early '80s (including Stone, Mad Max, and Turkey Shoot). Exploding with adrenaline-pumping clips and outrageous anecdotes from a smorgasbord of local and international names (including Quentin Tarantino, Dennis Hopper, Jamie Lee Curits and Barry Humphries) this is the wild, untold story of an era when Aussie cinema showed the world a full-frontal explosion of boobs, pubes, tubes... and even a little kung-fu!

Mark Hartley's movie-doc Not Quite Hollywood (2008) is a super-charged exploration of Aussie exploitation cinema of the 1970's and 80's, a doc I remember first remember watching in in 2010 with my eyes wide open as I took it all in with pen and paper in hand jotting down the names of films I'd never heard of, but the film's combination of outrageous film clips, adrenalized editing and enthusiastic talking heads put me in stranglehold and threatened to asphyxiate me lest I seek out these action-packed and preposterous movies, and the sooner the better.

I was aware f Australian cinema before the doc, having grown up on a select few slices of Australian imports like Mad Max (1980), Razorback (1984) and The Marsupials: The Howling III (1987) from plentiful 80's cable airings, but this doc opened my eyes up to a whole other world of outrageous down under cinema, a plethora of amped-up b-movies I'd never before heard of before, like The Man From Hong Kong (1975) and the supernatural shocker Next of Kin (1985). A few years on I'm still not caught up with the original list I scribbled onto a yellow notepad page, which I still have tucked away and well worn inside my wallet. Director Mark Hartley has since gone onto make docs about the Filipino exploitation explosion with Machete Maidens Unleashed! (2010) and Electric Boogaloo: The Wild, Untold Story of Cannon Films (2014), in addition to the remake of coma-shocker Patrick (2013), and while I love them all to varying degrees this is hands down, not just my favorite of his films, but my favorite movie doc of any kind of all time, and that's not just hyperbole, I watch it several times year just for fun.

The film opens with an enthusiastic intro from perhaps ozploitation's biggest super-fan, Quentin Tarantino (Pulp Fiction), and the rest of the he doc is split into three categories or chapters, first we have "Ockers, Knockers, Pubes and Tubes!" that begins by detailing Australia's history of censorship and how the floodgates of adult cinema opened up with the advent of the R-rating in the 70's, the market immediately saturated with sex comedies, or ocker comedies, like The Adventures of Barry McKenzie (1972) and Alvin Purple (1973), then into my favorite  era, "Comatose Killers and Outback Chillers!", and ending with "High Octane Disasters and King Fu Masters!" with a potent mix of action and high-octane car porn, nobody does car action like the Australians. Harley interviewed over 80 writers, directors, actors, critics including Stacey Keach and Jamie Lee Curtis (Road Games), James Wan (The Conjuring), Brian Trenchard-Smith (BMX Bandits),  Russell Mulcahy (Razorback), Steve Railsback (Turkey Shoot), and so many more, plus it's stuffed with outrageous scenes of gratuitous nudity, over-the-top violence, low-budget gore and weirdness from every category of exploitation cinema, it's a wonderfully affectionate and irreverent document of a wild era of unhinged cinema.

Audio/Video: Not Quite Hollywood (2008) arrives on Blu-ray from Umbrella Entertainment in 1080p HD framed at 1.77:1 widescreen. The image is sharp and clean, quality varies per the subject, the film clips look nicely vivid but fluctuate accordingly to the various sources, the behind-the-scenes clips are of lesser quality, but the new interview segments look great and mostly uniform in appearance. Umbrella have opted for two lossy audio options, we have English Dolby Digital Stereo 2.0 and Surround 5.1, there are no subtitle options, so some of the thick Aussie accents might hinder interpretation, but I didn't have any issues whatsoever. The audio mixes are well-balanced and bombastic, like the visuals the sound is amped-up and vibrant.

As to the region code for this release, the disc packaging indicated this is a region-free release but I was unable to play it on either of my Sony Blu-ray players, though it played just fine on my region-free Toshiba player. The single-disc Blu-ray release comes housed in an over-sized 15mm spine Blu-ray keepcase with a sleeve of artwork featuring the original key art for the release, on the reverse side is a collage of ozploitation cinema images with the the eye-popping chapter titles for the films. The disc also features an excerpt from the same key art as the sleeve.

Umbrella have loaded this sucker with bonus content, there are over nine-hours - you read that correctly - nine hours of extras! There's an audio commentary with director Mark Hartley, plus ozploitation auteurs Brian Trenchard-Smith, Tony Ginane, John Lamond, Alan Finney, Vincent Monton, Richard Brennan, Grant Page,  Richard Brennan, and researcher Justin King, adding additional onformation about the films, the doc and the era. There's also over an hour of deleted and extended scenes with optional commentary, plus additional interview with producers, directors and Hartley himself. We also get a MIFF ozploitation panel with Antony Ginnane, David Hannay, Brian Trenchard Smith, and Grant Page concerning censorship, plus a startling scene of stuntman Grant Page setting himself on fire on the MIFF red carpet! There's also a selection of vintage mini-docs for the films Inside Alvin Purple, Noon Sunday, and the best of the bunch, the 25-min To Shoot a Mad Dog Documentary with some scenes of an unhinged Dennis Hopper and a rather amazing fire-stunt from Grant Page (again).

On top of all that we have a three-hour plus ozploitation trailer reel, an ozploitation still and poster gallery, the original theatrical trailer, and the original 23-minute pitch promo for the film made when the only interview they had was Quentin Tarantino, combined with video clips and older vintage interviews from Hartley's previous making-of docs.

Perhaps my favorite of all the extras is an interview with film critic Bob Ellis who rips the ocker comedies from Tim Burstall and the "arthouse" films of Peter Weir nine ways from sideways, he's a verbose character and is hilarious through and through, speaking about his own night's of group sex, STDs, and again really savaging the films of Peter Weir again and again whenever given the opportunity.

Not Quite Hollywood is a wildly entertaining movie doc, loaded with fascinating stories, eye-popping visuals, and a compendium of mondo movie clips that are arguably more entertaining than the whole of the actual films. Movie docs just don't get any more essential than this, highly recommended.