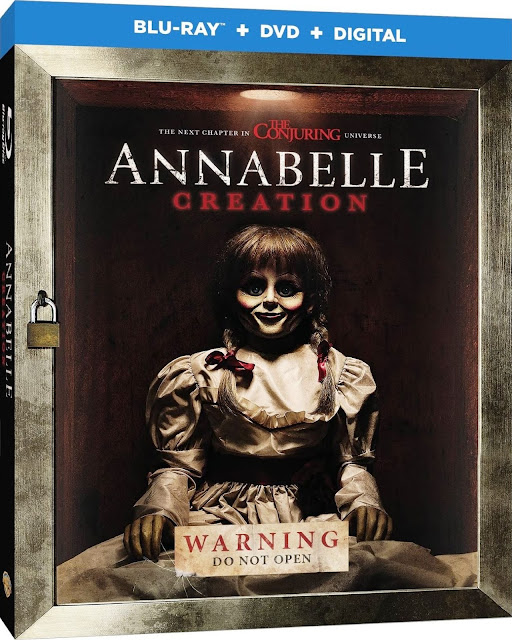 While I was not the world's biggest fan of  Annabelle (2014) I certainly did not hate it, it had some rather effective moments and I liked the story just fine, it was a decent studio horror film, very glossy and well shot, Just thought it was a middle-of-the-road. When I heard that Light's Out (2016) director was tapped for the sequel/prequel my interest level immediately increased, sure Light's Out was a teen-friendly frightener but I liked his style and hoped it would spark something with the r-rated prequel. This entry goes back the origin's of the demon doll, back to 1943 when doll maker Samuel Mullins (Anthony LaPaglia, Empire Records) and his wife Esther (Miranda Otto, Lord of the Rings: The Two Towers) lose their adolescent daughter Annabelle (Samara Lee) is a rather horrible roadside accident,very similar to young Cage's demise in Pet Sematary (1989), and with an equally awful, but more delayed outcome.

Twelve years later the still grief-stricken parents invite Sister Charlotte (Stephanie Sigman) and six young girls into their home following the closing of an orphanage. One of the orphans, Janice (Talitha Bateman), is afflicted with crippling polio, often left on her own while the others play outside she discovers a doll that's been kept hidden away in a locked room, the closet where it is kept is wallpapered in bible pages - which should have been some sort of deterrent, but she secretly begins playing with the doll she is unwittingly seduced by a demon. The demonic influence grows stronger everyday, until Janice becomes full-on possessed - after the doll literally vomits evil into her mouth! Her best friend Linda (Lulu Wilson, Ouija: Origin of Evil) sees the change in her friend, the growing darkness surrounding her, but her warnings to the adults falling on deaf ears, until she mentions the doll to Mr. Mullins, but by that point it might be too late for everyone.

This one has a great cast, I especially enjoyed LaPaglia's turn as the quiet but kind father. The 1950s era and set design are well done and the movie is attractively shot. The story is creepy and builds well, there's a some mystery about it and the film builds some tension and minor character development, but nothing too deep, but just enough to draw you into the world. There are also some nods to the extended Conjuring universe, we get a brief nod to The Nun from The Conjuring 2 (and it's upcoming solo film) and this one ties directly into the first film with an extended epilogue sequence.

The horror special effects are a bit slim but creepy; there's the spooky visage of young girl Annabelle which turns evil when she turns around at one point which startled me, the eerie bed-ridden Mrs. Mullins with a face partially obscured by a porcelain mask, a black-skinned demon, and a scene of fingers being bent backwards to a bone-snapping degree during an impromptu exorcism, it's fun stuff but it's not a bloodbath, the Conjuring universe movie aren't that sort of series, so don't come into this one expecting gore, just some good atmosphere and effective studio horror scares.

Audio/Video: Annabelle: Creation arrives on 2-disc DVD/BD from Warner Bros. framed in 1080p HD widescreen (2:40:1),  the image is vivid and the clarity is fantastic, the black levels are deep and inky, which is good because this is bathed in shadows and darkness throughout. This period set film has a very earthy/rustic color palette, it's been color saturated to a degree, but looks wonderful in-motion, a wonderfully robust visual presentation. Audio on the disc comes by way of powerful and fun surround presentation that has a funhouse sort of mix that was very pleasing, the score from Benjamin Wallfisch (Light's Out, It) comes through strong and atmospherically, enhanced by the surround mix.

Onto he extras we get an audio commentary from David F. Sandberg, plus a 42-min feature of raw footage from the shoot, a fly-on-the-wall perspective of what exactly a director does on-set. There are also two short films directed by Sandberg and starring his wife Lotta Losten, who also starred in his Light's Out (2013) short film, featuring at least one flourish which ended up in Annabelle: Creation. There are also deleted scenes with commentary, and a featurette about The Conjuring Universe.

This 2-disc DVD/Blu-ray release comes in a standard Blu-ray keepcase housed in an embossed slipcover with the same artwork, the disc themselves are black with silver lettering, there;s no artwork on the discs. The DVD and Blu-rays discs feature the same main feature and extras, and there's a digital download code for an HD version of the film.

Annabelle: Creation (2017) is a glossy studio horror entry, this isn't some indie shocker, but it manages to create some decent atmosphere and dread, the scares are well executed, and even though it goes down a few familiar paths I liked this one a bit more than the first, this is a sequel that surpasses the original, not by a large margin, but it makes for an entertaining watch.