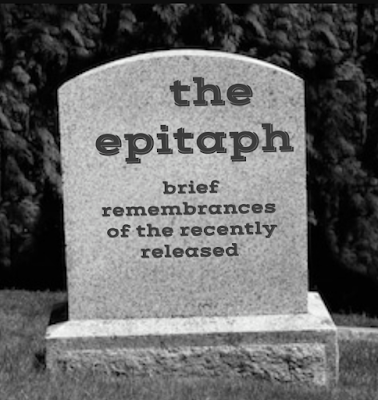 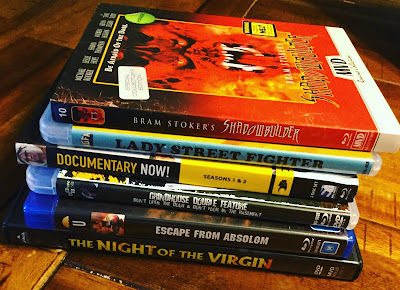 A shit sixty-hour work week in the food industry for me means another volume of capsule reviews for you! This week we have Spanish gore-comedy, a 90's direct-to-video supernatural thriller with Michael Rooker, a lo-fi 70's revenger, a double-dose of seedy don't-sploitation and mockumentary series that parodies famous documentaries. 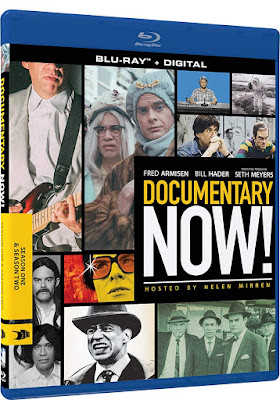 Fans of comedy and documentaries might have fun with the DOCUMENTARY NOW! SEASONS 1&2, a series which has just arrived on Blu-ray from Mill Creek Entertainment in a 2-disc set with all fourteen episodes from the first two seasons of the IFC series. I sort of fancy myself a fan of docs but watching this I realized nope, I'm just a casual fan, but the creators of this show are die-hards. This series lampoons famous docs with oddball accuracy, telling a different story but capturing the aesthetic and vibe of the original docs, it's so next level documentary-nerdy that it sort of boggles the mind. Despite not really having watched any of the docs they send-up, with the exception of The Kid Stays in the Picture, I had a blast with all these. This is the brainchild of Saturday Night Live alumni Fred Armisen, Bill Hader, Seth Meyers, and director Rhys Thomas with additional writing by stand-up comic John Mulaney. Like I said, I wasn't too aware of 99% of the docs being parodied here but I found them all funny, and if you're an adventurous TV type I think you will to. No extras on this one but you will find a digital code for the proprietary Mill Creek streaming service. 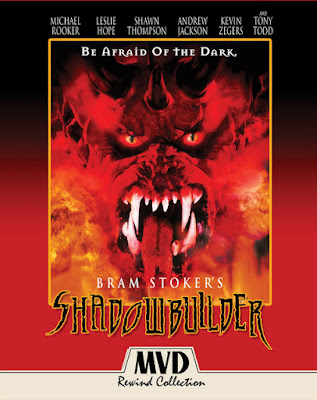 The 1990s straight-to-video BRAM STOKER'S SHADOWBUILDER (1998) stars Michael Rooker (Henry - Portrait of a Serial Killer) as an ass-kicking demon hunter sponsored by the Catholic Church, think of him as the Father Marin of demonology, a man of faith and handy with a gun and not opposed to some physical violence when necessary. He's on the trail of shadow demon who has targeted a kid with the potential of becoming a saint, which designs on bringing about the Apocalypse. This one feels like a 90's direct-to-video entry, it feels dated, the special effects are passable, but there's a shimmering/fluid metallic look to the demon that feels real dated, but I love Rooker and I'll watch just about anything he stars in, plus you get to see Mr. Tony "Candyman" Todd as a dread locked loon. The film gets a deluxe 2-disc DVD/BD from MVD Entertainment as part of their MVD Rewind Collection with a reversible sleeve, limited edition slipcover with a numbered spine and fold-out mini-poster. Note: That cool-looking demon on the cover is nowhere to be found in the film, that looks more like Curse of the Demon (1957) than anything you get here, but it's still mighty cool. 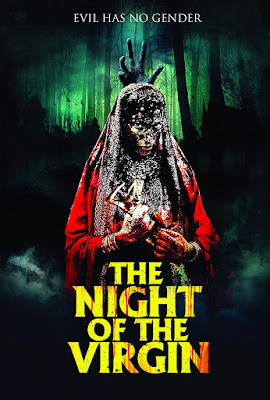 Spanish horror-comedy THE NIGHT OF THE VIRGIN (2016) is a chunk-spewing slice of disgusting foreign cinema, about a gangly twenty-something Nico (Javier Bodalo) who is trying to pop his cherry on New Year's Eve at a club. No women seem to want to give the goof a go but an older woman named Medea (Miriam Martin) takes the horny guy home, but this lady is giving off a seriously creepy vibe from the beginning, which should send him running for the door, which he considers, but he's thinking with the wrong head, which winds up putting him in an impossible predicament as the increasingly bizarre woman sets forth to bring about the birth of an ancient deities child - and not in any way you are expecting! The film is a bit over-long at but the slow-burn serves to amp up the atmosphere and tension, leading up to a bizarre, disgusting and frenzied finale that was both depraved and ingenious. The film gets a region-free release from MVD Visual, extras include slideshow and trailers for the film. 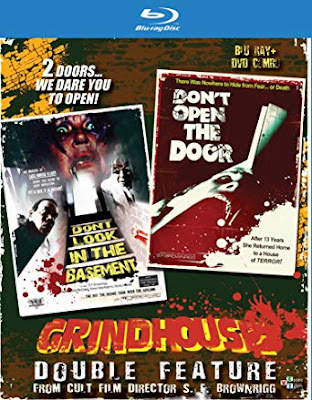 Fans of region 70's exploitation should be aware of GRINDHOUSE DOUBLE FEATURE: DON'T LOOK IN THE BASEMENT & DON'T OPEN THE DOOR,  a double-dose of S.F. Brownrigg cult-cinema by way of a pair of what I like to call don't-sploitation, the first film is a seedy 'the inmates running the asylum' thriller with a low-budget regional charm, a nymphomaniac and an axe murderer. The second film has a young woman being summoned to the home of her ailing granny - the same house where her mother was murdered years earlier. A seedy Gothic thriller with some cool low-budget suspense and mystery. The 2-disc DVD/Blu release features 1080p HD restoration of the drive-in stapes along with a commentary from David DeCoteau and film historian David Del Valle, plus trailers, deleted scenes, a reversible sleeve. 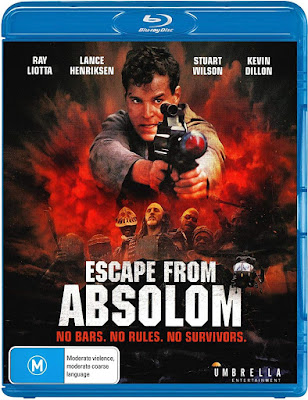 From Australian distributor Umbrella Entertainment comes ESCAPE FROM ABSOLOM (1995) a prison island movie I somehow have never come across, starring Ray Liota as a mysterious man send to an inescapable prison island, there he runs afoul of the locals who are a very rough crowd. This slice of prison escape roughness stars a game cast including Lance Henriksen, Kevin Dillon and Ernie Hudson and is an action-packed and violent piece of 90's cinema, loved it. Think Mad Mad by way of Terminal Island (with a dash of Waterworld) and you have a decent idea of what your in for here, Liota is surprisingly great as the man of action here, and I love Michael Lerner (Barton Fink) as the evil warden, playing against type a bit, but he pulls it off. The 1080p presentation looks great, but the extras are slim, only a vintage featurette and trailers, but we do get a reversible sleeve of artwork with the same artwork but alternate U.S. title of No Escape. The Disc is labeled region B-locked but played Just fine on my region A Blu-ray player. 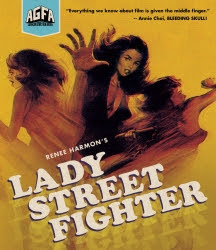 If you regularly read this blog you might know I have a soft spot for low-budget trash, but LADY STREET FIGHTER (1977) tested and destroyed that notion, a semi-incompetent film about a prostitute turned dead-sister revenger that scream low-budget boredom, but it's a wild sort of dull that I'm sure has it's fans. The story behind the film is several times over more interesting than the film, thankfully we have some cool extras that explore the film and it's starlet Renee Harmon by way of an audio commentary with the director James Bryan (and a booklet with liner notes from Bleeding Skull's Annie Choi, and a reversible sleeve, oh, and they've included the previously unreleased sequel REVENGE OF LADY STREET FIGHTER (1990) which I have not been brave enough to throw on the TV yet. The film is a turn but the release from AGFA is top-notch - only lovers of trashy lo-fi seventies cinema need only seek this one out.

There you have it, as promised a few brief remembrances of the recently released. 'Til next time support physical media and buy a damn movie, Amazon links below for each of the films below...