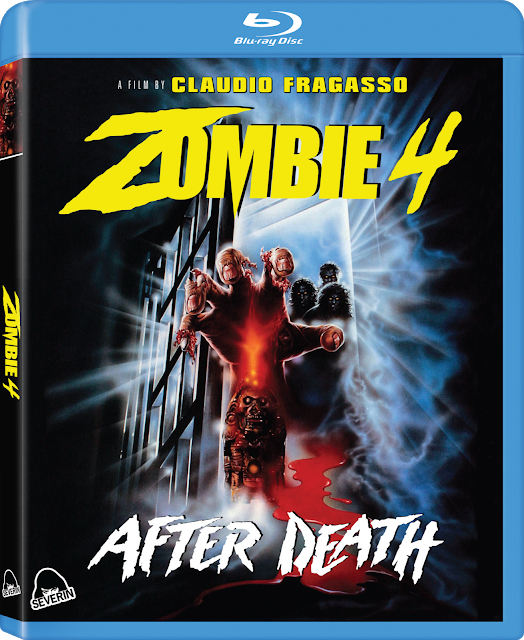 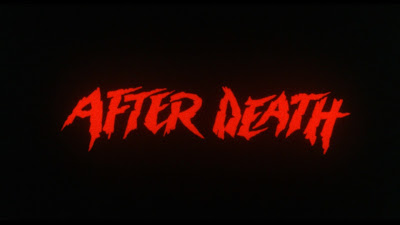 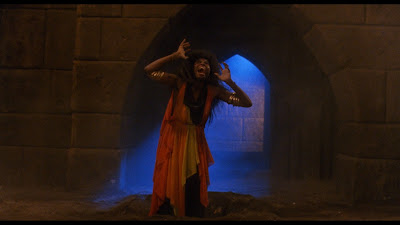 From director Claudio Fragasso (Troll 2) - which should tell you something right there - comes Zombie 4: After Death (1988), a Filipino shot zombie film that opens with a zany prologue wherein an angry voodoo priests condemns his wife to the pits of Hell as a smokey-hole opens up in the ground swallowing her. The rite is interrupted by a group of medical anglo-interlopers who show up and dialogue is exchanged with some crap about them causing the death of the voodoo priest's daughter through their cancer research. The priest places a curse on them, which ends up being a zombie plague. This is a strange prologue as it doesn't have a whole lot to do with the rest of the film but we do get some green-drooling zombies, one of which looks a bit like a cheap knock-off of the Garretta Garetta demon from Lamberto Bava's much superior Demons (1985). The only survivor during the prologue is a young girl, and we flash forward about ten years and this girl returns to the very same island with a group of mercenaries, though I'm not sure why she came back, the whole time she keeps speaking about how they are all doomed if they step foot on the island, but they do anyway, of course. This first group we're introduced to ends up as victims for the undead from the get-go, falling victim to the surprisingly fast and kung-fu inclined undead in quick succession. The undead here appearing in black shrouds and white-face, with caked-on make-up meant to make them look like their flesh is rotting off, but just looks really cheap, but that they are fast and inclined to use weapons at times made me think of another Italo-schlocko, Umberto Lenzi's batshit infected flick Nightmare City (1980). 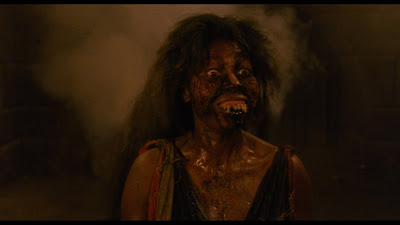 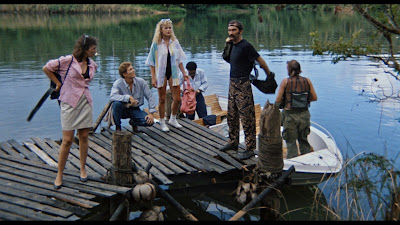 Much like in the Fulci-Mattei-Fragasso hybrid Zombie 3 (1988) the film has two groups of people plagued by the hungry undead who meet-up and face-off against the threat, the second group turns out to me the main group we stay with for most the film, we have group leader David (Massimo Vanni), Chuck (gay porn star Jeff Stryker) and Valerie (Candice Daly). This adventuresome trio are on the island to explore a volcano, but end up down in the catacombs of where we saw the voodoo priest earlier and reading from the "Book of the Dead", in a bit stolen straight from the Evil Dead, eventually making their way to the island hospital where they encounter more undead before ending up down in the catacombs again. 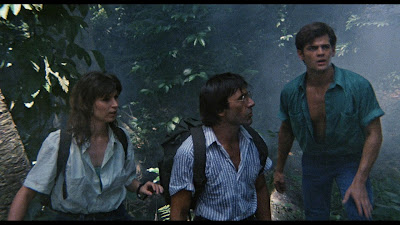 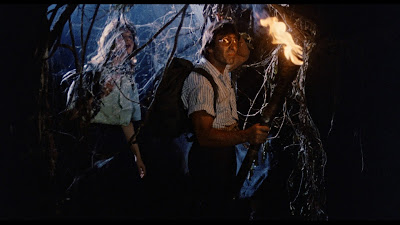 As mentioned the film is directed by Fragasso (director of Troll 2, screenwriter of Zombie 3, Shocking Dark) so you know this is gonna be a silly sort of film, but it's also nice and gory with some really fun blood and guts gags that are sure to entertain the horror fiends. The film actually has some nice atmosphere too, dare I say it, it superficially brought to mind Lucio Fulci's Zombie (1979) a few times, the jungles and tunnels are all drenched in wafts of fog and with a synth-drenched score from Al Fiesta (director of Fatal Frames!) that heaps on the queso-delic campiness, accenting the sometimes shambling, often running undead, as they emerge from graves and chomp down on the living. 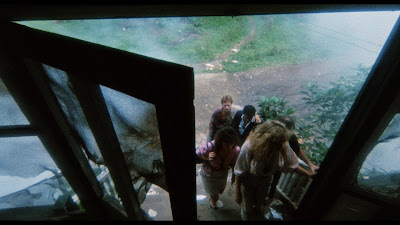 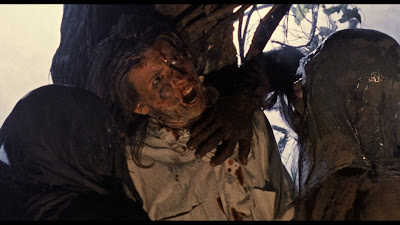 The acting in this one is pretty spotty but also appropriate for the film, this is a straight-up Italian cheese-fest, and that's what I was in the mood for when I popped this on, and I was not even a little bit disappointed by it. It certainly lives up to it's reputation as a hideously awful - but totally fun - slice of late-80s Italian/Filipino schlock. 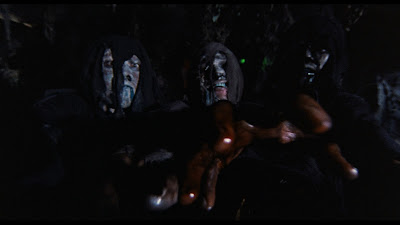 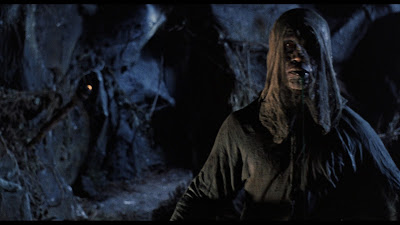 Audio/Video: Zombie 4: After Death (1989) arrives on Blu-ray from Severin Films in 1080p HD framed in 1.85:1 widescreen, advertised as a 2K scan from elements that aren't advertised, so it's probably not the original camera negative. It's worth noting that this is the 8-min longer uncut version of the film, so you're getting more gore with this release! The image shows some wear and tear but isn't DNR-abused, grain shows up just fine, looking it bit chunkier during the darker scenes and looking considerably less gauzy. Colors are decent, occasionally a red, green or blue gel light shows up and looks good, blacks are just okay, it's not gonna blow you away but it looks better than my Shriek Show DVD by a Filipino mile and is gorier!

Audio comes by way of an English DTS-HD MA Mono 2.0 track, with no subtitle options. Dialogue is clean and never hard to decipher, the synth score from Al Festa sounds good, if you dig it the first 3000 copies of this one include a CD soundtrack, listening to the szcore in the car today I was a bit shocked how good it was. 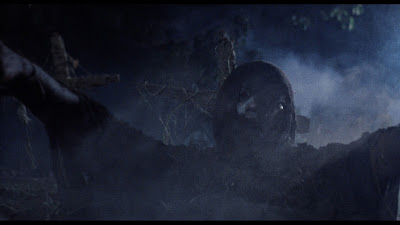 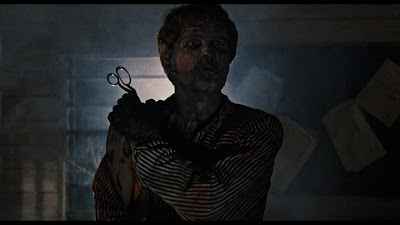 Extras begin with another wonderfully candid interview with Director Claudio Fragasso and Screenwriter Rossella Drudi (plus their ever-present cat) who speak about this being his vision as opposed to other films he co-wrote, this time out he was director, but was slightly hamstrung by the fact that he had limited access to a camera as Bruno Mattei was making Strike Commando 2 at the same time, so he only had access to the cameras at night. They talk about how they came up with idea of a more action oriented zombie movie, wherein the zombies could think, handle weapons and run fast, which he points out he did a long time before films like the Dawn of the Dead remake and 28 Days Later, and having to shoot the prologue for the film when the movie ended up a bit too short. 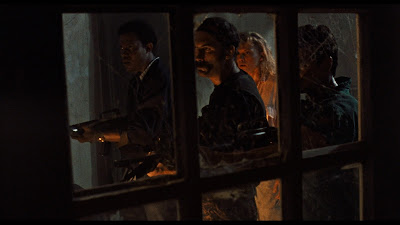 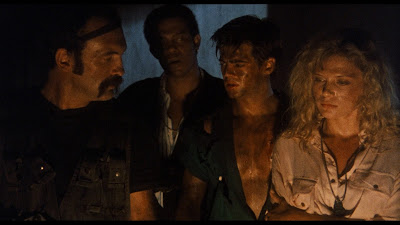 Also discussed is the Al Fiesta score, the gory special FX of Franco Di Girolamo, the visual FX of the Paolocci Brothers, who Drudi amusingly recalls as being "full of shit and pretentious", plus working with the Roman/Filipino hybrid crew. There's also a fun story of how during a dinner with his Filipino crew he unknowingly drank a hallucinogenic coconut liquor that warped reality, plus anecdotes about working with the Filipino crew on this film and on Strike Commando 2 with Mattei, and remembering actors Jeff Stryker and the late Candice Daly. 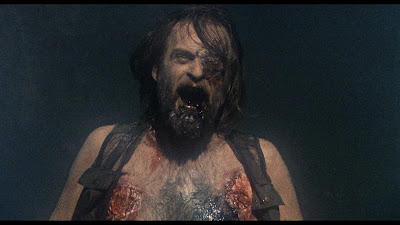 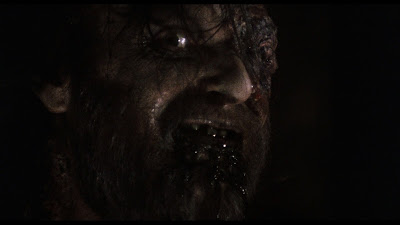 There's a 2-min vintage interview with the late Candice Daly who recalls flying to the Filipines to join her then boyfriend who said she could get a gig on some Italian films, remembering how hot and humid it was, and referring to Fragasso as Francis Ford Fragassio, ha ha.nThe disc is buttoned-up with 4-mins of behind-the-scenes footage of shooting the prologue in Rome, plus a 3-min trailer for the film.

The 2-disc BD/CD release comes housed in a black Blu-ray keepcase with a one-sided sleeve of artwork, the same key art on the sleeve is featured on the Blu-ray disc, the CD featuring an image from the film. 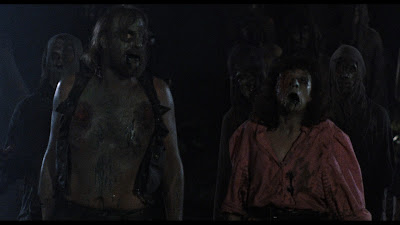 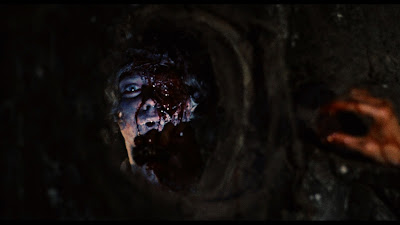 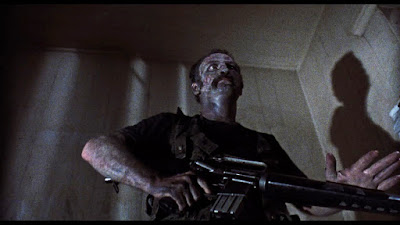 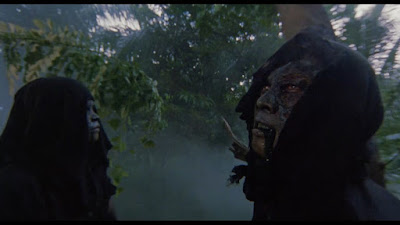 Zombie 4: After Death (1989) is not a good film, but it's the good sort of bad that I find hugely entertaining, sometimes you just wanna watch a bad zombie movie and few did it better (or worse, depending) than the Italians. It's with only a small amount of  slight towards Claudio Fragasso that I say he had his hands on quite a few of these z-grade zombie curios throughout his career, and Severin have given it a Blu-ray several times over more opulent than it probably deserves, so dig in!