SCARED? You will be as FRIGHTMARE (1983) hits UK home video for the first time since the era of VHS on 10th September. And this chilling story of resurrected supernatural murder has never looked better! 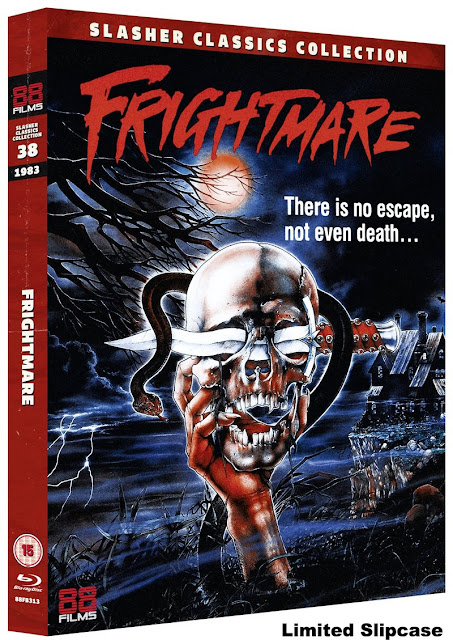 Also known as THE HORROR STAR, the 1983 cult creeper FRIGHTMARE was a beloved video rental favourite that might even be seen to anticipate the more supernatural direction that the genre would go in with the following year’s A NIGHTMARE ON ELM STREET! Perhaps even an influence on the better known blockbuster FRIGHT NIGHT, this tightly-paced and well-directed gem introduces us to a late night horror star who is long past his peak and about to meet the Grim Reaper – for real rather than ‘for reel’! But you cannot keep a embittered old genre star down and, sure enough, when some fanboy teens decide to disturb the deceased celebrity’s grave he opts to rise up… with a vengeance!

FRIGHTMARE was the fear-film that gave audiences postmodern shocks long before Wes Craven gave us his game-changing SCREAM in 1996. An underrated and underseen gem, the film highlights a notable supporting performance from the great Jeffrey Combs (RE-ANIMATOR) and character great Chuck Mitchell (PORKY’S) as well as assured direction from Norman Thaddeus Vane (who also worked on the X-rated cult favourite DRACULA SUCKS). With a dash of pitch black humour, and a literate script, as well as characters that you actually want to see make the end credits with their limbs still intact, FRIGHTMARE was a revelation to slasher fans back in 1983. Far removed from so many of the opportunistic cheap and cheerless slice and dicers that were still rushing out to theatres and video shelves as the mid-eighties approached, FRIGHTMARE is a unique blend of student-slaughtering and old dark house thrills – mixed up in a malevolent and unpredictably nasty narrative! 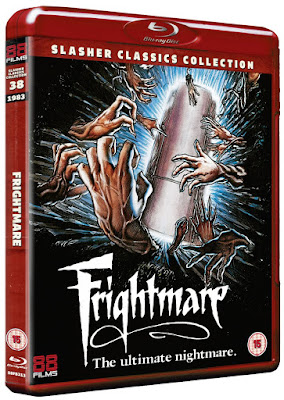 Kicking-off with some heady laughs and genre references, FRIGHTMARE boasts more changes of tone and identity than Madonna, and it has aged at least as well as the ‘Material Girl’ too! Take our word for it, this is one of the most stylish and sublime of all the eighties slice and dice horror-pack and 88 Films is thrilled to present FRIGHTMARE as part of its Slasher Classics collection in a jam-packed edition. Numbered as number ‘38’, FRIGHTMARE is proof positive of the ambitions of this line – resurrecting the brave indie-shockers from the past for a new generation to enjoy and an older one to reappreciate. The disc hits UK shelves on Monday, September 10th but early birds can get their order direct from 88 Films NOW – with a very limited slipcase reserved for the first 300 orders only!!!!