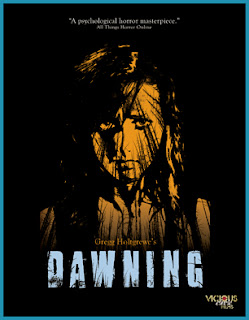 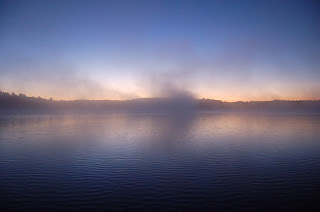 Film: Director Gregg Holtegrewe's indie psychological horror film Dawning begins as sibling Chris (Jonas Goslow) and Aurora (Najarra Townsend) drive out to a cabin in the woods. Mmm Hmm. Now we all know that in genre cinema there's no such thing as just a cabin in the woods that doesn't involve dark forces, zombies, banshees, demons, torture and/or rape. The purpose of the trip is to spend time with their father Richard (David Coral) and stepmother Laura (Christine Kellog-Darrin). They're a dysfunctional bunch and it's a pretty tense gathering all around. There are all manner of emotional issues at play here, it's your typical post-divorce nightmare scenario.

The night the family are gathered at a campfire roasting marshmallows and going through the motions of  small talk when the family dog Brandy disappears into the forest. Already uneasy Aurora becomes frantic about the missing pet. The siblings set out in search of the dog and discover it laying injured, having sustained a deep wound. The family attempt to administer some first aide but it's apparent the dogs injuries will prove fatal. Perhaps a little too quickly Dad takes it upon himself to put the pooch down Old Yeller style. With the dogs death the mood turns from strained to mournful but the somber air is broken when  a crazed stranger (Daniel Jay Salmen) covered in blood stumbles into the cabin mumbling about something sinister in the woods and then things get strange. There's a dark presence outside the cabin that creaks and groans and the strangeness has infiltrated the cabin, too. It's occupants indulge in paranoia, insecurities and weaknesses are exposed and frayed relationships are strained to the breaking point. As sanity crumbles a dark force threatens to consume them all. 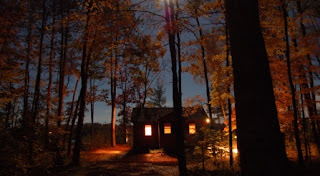 This is a taut psychological thriller with some nice supernatural overtones that while not rewriting the cabin-in-the-woods trope offers an interesting twist on the genre. It's a tight script contained within a brisk 81 minute run time and Holtegrewer takes care not to overstep his means. There are a ton of indie features that aim for stars on a budget that wouldn't get the to the $1 theatre on a Tuesday and it's refreshing to see a tightly knit film working within it's confines.  A point of contention for some may be the ambiguous  finale that arguably does not deliver on the tense film'sbuild-up but I didn't find it ruinous to the film's overall intense creepiness.
DVD: For review purposes I was sent a pre-release screener of the DVD from Vicious Circle Films that was not of the proper quality to adequately address video presentation but the Dolby Digital 2.0 audio was quite good, there's a nice sound design to the film that enhances the eerie setting, it's creepy stuff and I think it would have greatly benefited from a 5.1 surround mix but for a stereo track it's more than adequate. No comment on the special features as the screener contained none.
Special Features:
- Write/Director Audio Commentary
- Cast Audio Commentary
- One-hour Behind-the-Scenes Featurette with Exclusive Interviews
- Deleted Scenes and more


Verdict: Hotlegrewe hasn't created a completely original concept here, there are definite shades of Sam Raimi's Evil Dead and Stanley Kubrick's The Shining throughout, but it's that rarest of scary films; a tense character driven slow-burn that relies on that darkest of places, your imagination. Dawning comes to DVD, Blu-ray and Video-On-Demand on June 28th, definitely a recommend. Pencil-in in Holtegrewe as a director to watch cuz I think we're gonna see bigger and better things ahead. 3.5 outta 5
http://dawningthemovie.com/