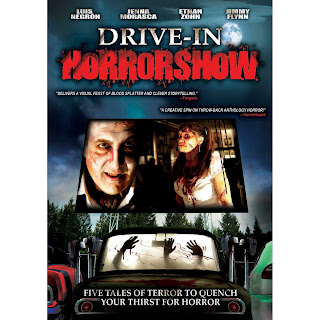 Synopsis: In days long ago, people would come to the drive-in to experience highs and lows. To laugh, or cry...... or scream. Those days have passed us by, and all the drive-ins have long since closed their doors. Those great movies have been forgotten. But some films won't stay dead. 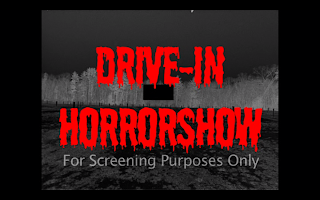 Film: I do love a good horror anthology and while the mainstream cinema has turned it's back on the format indie filmmakers like Michael Neel and Anthony G. Summer (3 Slices of Life) are crafting great collections of indie horror vignettes for the masses willing to turn a few stones to find the good stuff. The Drive-In Horrorshow is hosted by a wonderfully campy ghoul known as The Projectionist, an undead horror host in the grand tradition of Alfred Hitchcock and Vincent Price. He along with his loyal assistants Billy Troll, Zombie Frank and The Teenage Axe Victim delve into his private vault of horror every Saturday night and select five horror tales for his Horrorshow. This is pure awesomeness, right up there with the Crypt Keeper, I love this host and the concept is nicely developed throughout the film's connective segments.

The first short is called "Pig" and it's post-date rape revenge tale. A young man awakens in a bath tub as the it slowly fills with water. He's glued to the tub with adhesive and is unable to move. He's missing some of his upper front teeth and blood trickles down his chin. He's disoriented and panicked, a distraught young woman stares at him as she sits aside the tub, a bloody hammer lies on the floor next to her. It's a pretty simple set-up and it's effective stuff. At one point the young man makes a desperate attempt to escape, he pries his feet from the adhesive, his skin tears away and blood droplets stains the water. That was excruciating to watch, like seeing a mouse on a glue trap hopelessly struggle to escape, tearing itself apart in the process. But you can't feel sorry for the guy though, he's a date rapist, he violated this young woman and she's out for revenge, can you blame her? He's a feisty lil' rapist too, takes a bite outta her hand but you just don't fuck with a red head with a hammer, y'know. Made me think of a phrase from the Beat Happening tune "Red Head Walking", "heed what this wiseman says, stay away from redheads" and most certainly don't rape women lest you get what a pig deserves.

Up next is "The Closet" which is a variation on the classic monster-in-the-closet premise in the tradition of The Twilight Zone. A young boy named Jaime has a terrible home life. His Dad's a rage-a-holic, his Mom's unaffectionate and his sister is the worst kind of pick-ass. The kid just wants to watch his favorite science-fiction TV program but it just ain't gonna happen. After unjustly being sent to his room without dinner he discovers a creature in his closet that convinces him that he would be so much better off without the annoyance of his family. One by one Jaime lures the family members into the closet where they become creature bait. The story is told from Jaime's perspective and it's easy to see how a naive, abused 10 year old kid might be tempted to do such a thing but he quickly comes to realize the error of his impulsive actions.

In "Fall Apart" Patrick Mazursky is a small town Dr. who makes house calls, so obviously this takes place in an alternate reality where HMO's haven't plundered the medical profession, right? After visiting a patient with Flu symptoms he starts to feel a bit under the weather himself which he chalks up to just an inherent danger when  treating the ill. Soon his flu symptoms turn worse and he begins to develop painful leisons that get progressively worse. What is this mysterious illness and what secret agency is trying to keep it under wraps? If you crave old-school gore this vignette does not disappoint. Skin peeling of in sheathes, exposed musculature, real gross stuff along the lines of Cronenberg's The Fly or the recent splatterfest Cabin Fever 2. Aside from the awesome gore what I loved about this was the running narration from the Dr. told in retrospect and the conspiratorial tone which reminded me of classic Tales from the Darkside episode. This was my favorite of the five tales.

Two young brothers overhear the tale of "The Meat Man", a cannibalistic serial killer stalking their suburban neighborhood. He kills his victims then strips their bodies of the choicest cuts of meat for consumption later. I love suburban horror, particularly films where kids are put in imminent danger and this one was fun. The boys come to discover some items in their own home, blood stained twine and meat packing paper, that would seem to implicate their travelling vacuum salesman father in the murders, at least in their minds. Are the boys in danger or are they just letting their youthful imaginations get the better of them? Fun stuff with a nice twist.

The finals story "The Watcher" is a backwoods survival horror film and features a group of four friends who head to the great outdoors for a weekend of drinkin', tokin', fuckin' and runnin' ....for their lives! True to it's inspiration the film has all the earmarks of a slasher film with very little new to offer, but so what, it's fun. There some witty humor, some sex, annoying characters and a final girl who takes on the predatory cannibal-man with a formulaic finale.


DVD: The pre-release screener I was sent to review is 1.33:1 full frame and shot on consumer grade digital video, it's a micro-budgeted feature and has many of the limitation you might associate with that format. That said the film looks quite good with nice cinematography and great production values.  The only supplemental materials on the pre-release screener was a Trailer (2:06) for the film. No subtitle options are included. While my screener didn't contain the supplemental materials here's what you'll find on the disc.

Verdict: Thank the Lord that indie filmmakers like Michael Neel keeping the horror-anthology flames burning bright. Major studios have all but shunned the format, shelving the brilliant Trick r' Treat for years before dumping it unceremoniously onto DVD. Drive-In Horrorshow instantly reminded me of classic horror anthologies like Creepshow, Tales from the Darkside and all those wonderful Amicus anthologies like Tales from the Crypt and Vault of Horror. This is a high recommend from me, very entertaining and obviously done by filmmakers who love the genre. Long live the horror anthology!